Those who are promoting expansion of walking and biking trails, landslide repairs and a host of other projects including sewerage are competing for a few million dollars in gambling revenue from The Meadows Racetrack & Casino. 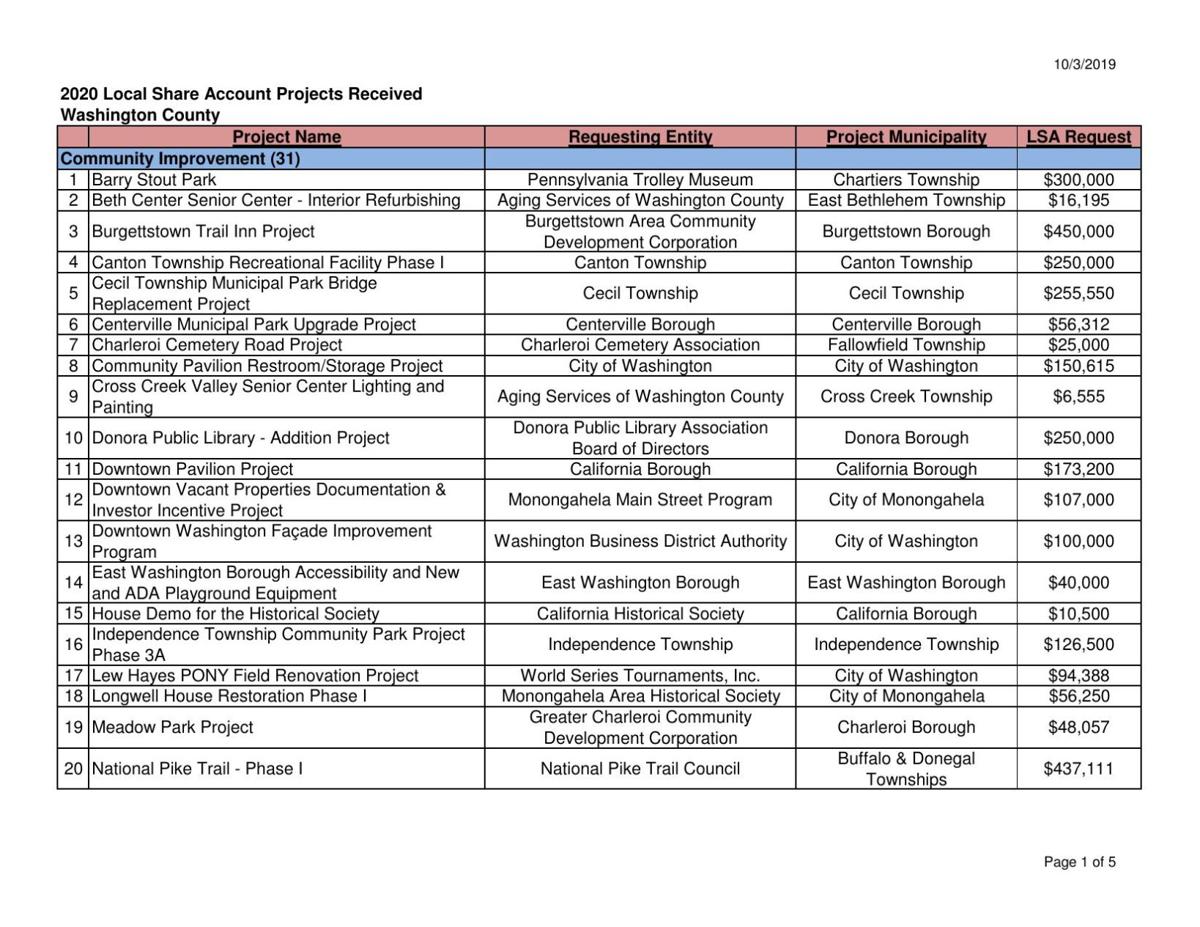 The formula for the amount of money available for distribution through the local share account depends on how much gamblers spend at The Meadows Racetrack and Casino. In the latest round approved by the state, $7.4 million was earmarked for 40 proposals.

There are 15 sewer projects totaling more than $9.7 million potentially on tap for 2020, including the largest-single request this year, $4.1 million for a South Franklin Township proposal for the Chartiers Creek watershed in the vicinity of the county airport and Route 18.

Among other sewer projects in the million-dollar range, Mon Valley Sewage Authority, Donora, is seeking $1 million for the third phase of its long-term control plan, and Peters Township Sanitary Authority is asking for $1.34 million for equipment to remove phosphorus and ultraviolet disinfection system at its Brush Run treatment plant.

Flooding and landslides during the past year have taken their toll on the region, according to several applications requesting money in the general public interest category to clear up those problems or work on storm sewers.

North Strabane Township, the host community of the casino, is seeking $1,678,000 to acquire property affected by the landslide in the Majestic Hills development that resulted in the condemnation of three homes.

Marianna Borough is seeking a half-million dollars to repair a landslide along Beeson Avenue. Robinson Township requested $666,327 to fix its Fourth Street slide. Monongahela’s municipal authority would like $150,000 for the second phase of stabilizing Dry Run’s slope. North Charleroi requested $43,000 to remediate the Locust Alley landslide.

Monongahela and West Brownsville are each asking for six-figure solutions for storm sewers, while South Strabane Township could use $400,000 for the Manifold Road stream bank and floodplain restoration project.

Among community improvement projects, the National Pike Trail Council is seeking $437,111 to convert the former Hempfield Railroad line to a biking and walking trail in the Claysville area.

Peters Township asked for a quarter of a million dollars for a 1.5-mile trail in Rolling Hills Park, adjacent to the new high school, that it hopes to connect to Arrowhead Trail, part of the former Montour Railroad.

Burgettstown Area Community Development Corp. is seeking $450,000 for an inn and hostel along the Panhandle Trail. The organization has proposed converting the annex of the former G.C. Murphy store at 1706 Main St.

Also in northern Washington County, Guardian Angels Medical Service Dogs Inc. has asked for $400,000 to establish a campus in Robinson Township on the 102-acre site of a former strip mine adjacent to the Montour Trail. Disabled veterans would stay there while they trained with service dogs.

Job training requests total slightly more than $397,000 for recycling clothing through the Washington City Mission, the agriculture education center at the Greater Washington County Food Bank’s farm and the Trinity Area School District’s partnership with the food bank in a mechanical and technical training program.

This round of applications is the first since state Rep. Bud Cook (R-West Pike Run) sought co-sponsors for a bill proposing to change the local share program in Washington County, distributing the cash to school districts to reduce tax bills.

According to the House of Representatives website, the change, proposed April 16, has no co-sponsors. Neither has it been introduced.

Cook’s proposed change in the use of Local Share Account funds would not disturb the formula put in place a few years after the program’s inception that generally grants most of the 66 municipalities in the county $25,000 plus $10 per resident to be used “for any lawful purpose.”

Despite the developments over the past year, Washington County Commission Chairman Larry Maggi said the local share committee is forging ahead.

“He’s never contacted us at all,” Maggi said of Cook. “We’ve never had an opportunity to meet with him. We do work closely with the other legislators. We knew about the LSA concerns through the media.”

Meanwhile, state Rep. Tim O’Neal (R-South Strabane) is a new appointee to the Local Share Account review committee, which will convene public hearings Dec. 2 and 3 at times to be determined.

O’Neal joins state Sen. Camera Bartolotta (R-Carroll) as the other legislative member on the committee.

The committee recommends a list of projects it deems worthy to the county commissioners, who vote on the matter and forward it to the state Department of Community and Economic Development, which has the final say.