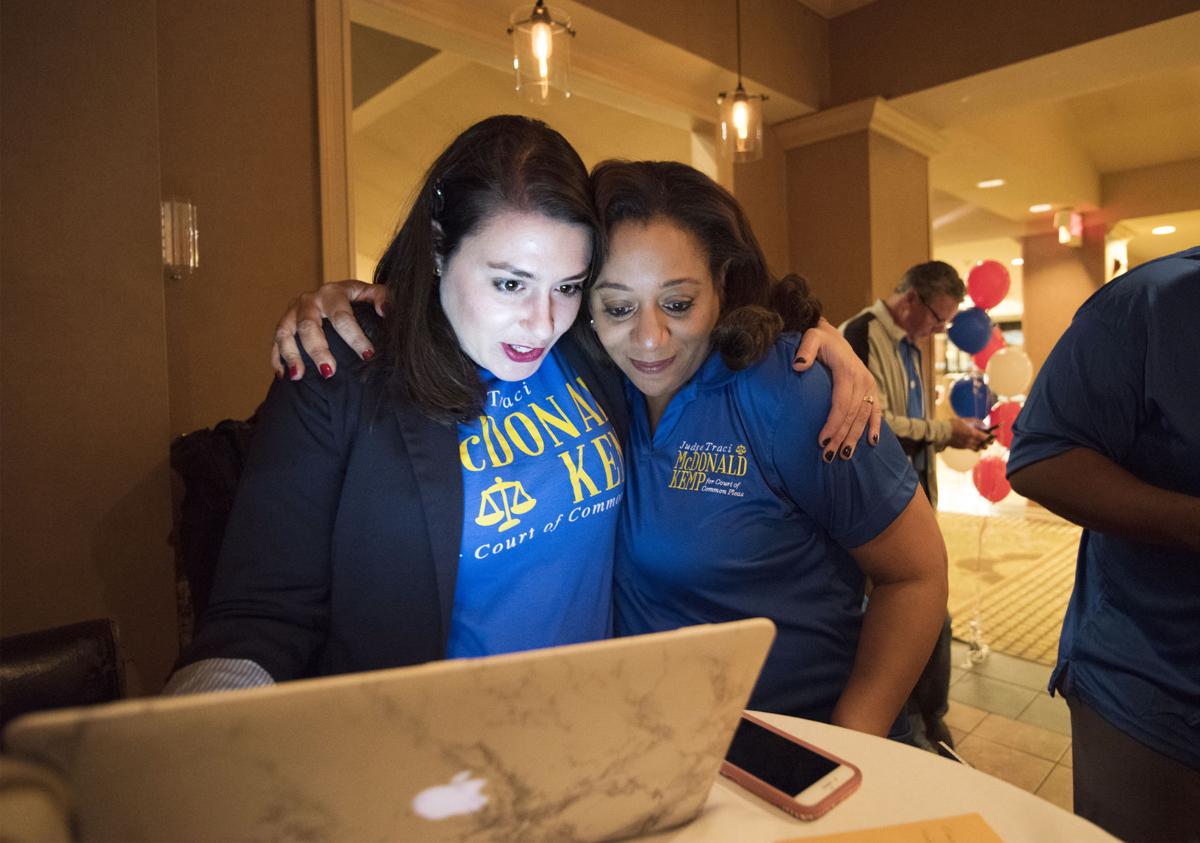 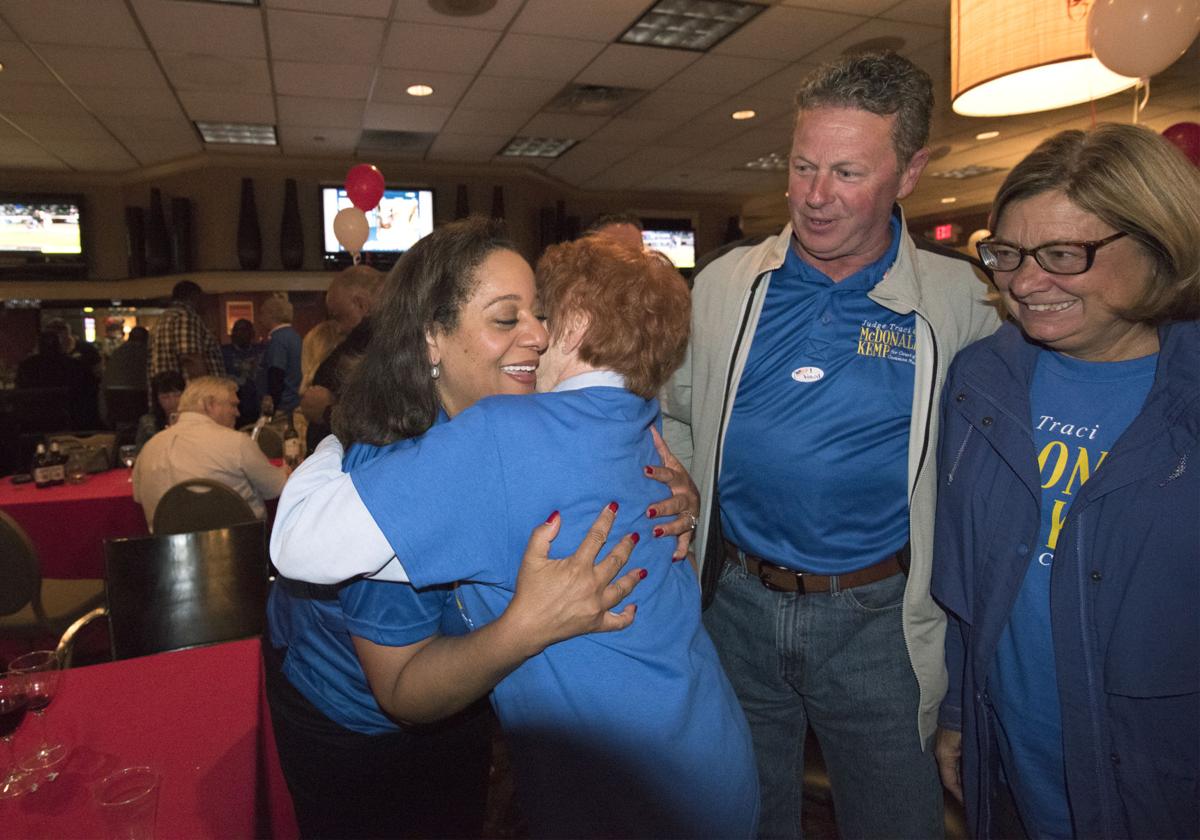 Editor's note: This story has been updated to reflect the gender makeup of the Washington County Court of Common Pleas.

Photographs of judges through the decades rim the second floor of the Washington County Courthouse. The vast majority of those depicted are white men.

When 2020 rolls around, for the first time in its 239-year history, a picture of a black woman will be placed among them.

“I’m proud to be the first female African-American judge on the Court of Common Pleas,” Traci McDonald-Kemp said at the Doubletree Hotel on Racetrack Road.

“But I want people to vote for me not just based on that, because I’m a qualified candidate. And the bonus is (that I’m the first) right? I’m just very grateful.”

Rather than addressing the crowd, an obviously moved McDonald-Kemp shook the hands of her supporters and hugged them. saying over and over again, “This wouldn’t have been possible without you.”

On the Republican ticket, McDonald-Kemp racked up 7,765 votes to Hatfield Wise’s 4,352.

With 550 absentee ballots yet to be counted, the lead of McDonald-Kemp, a Cecil Township-based magisterial district judge and former Washington County deputy district attorney, was insurmountable.

Her opponent summed up the night in four words.

“Let God be praised,” the former Washington County Children and Youth Services agency attorney responded to an email inquiry. “It’s my comment both before and after the voting.”

McDonald-Kemp attended the 2015 “Ready to Run” campaign training program for women sponsored by the Pennsylvania Center for Women and Politics at Chatham University. She was elected magistrate for the Cecil area that year.

Dana Brown, executive director of the program at Chatham, said in an interview Tuesday, “At the Pennsylvania Center for Women and Politics, we are always excited about breaking down barriers.”

Becoming “the first woman of color on the bench, that is to be acknowledged,” Brown continued.

“Diverse experience may inform how a judge may rule or how a representative would legislate. We’re always advocating for diversity across our governments.

“Gender diversity is at the top of mind here for the center of women in politics, because there’s such a great gender gap in the state of Pennsylvania in public service.”

Campaign finance reports for the candidates through early May showed McDonald-Kemp outspending Hatfield Wise about 8.5 to 1.

The Friends of Traci McDonald-Kemp committee had a cash balance of $49,848 going into the homestretch of the campaign, while Hatfield Wise ended the reporting period with $2,095.

Regardless of the outcome Tuesday night, the Washington County bench, split between four men and three women, was destined, barring any unforeseen circumstances, to shift closer to a majority female bench come January 2020.

“Women do well at the state level. We have many women on the appellate courts. But with 67 different counties, there does seem to be a gap. We don’t seem to see gender parity or anything close to it. The last time we checked, it was maybe hanging around 30 percent female. We’re definitely far from parity in the county court system.”

In other Washington County contests, in the commissioners’ race, incumbent Republican Diana Irey Vaughan, who represents the minority party on the three-member board, will be paired with Nick Sherman.

Unofficial totals from 172 of 175 precincts showed Irey Vaughan, who is seeking her seventh term, with 8,656 votes to Sherman’s 6,739 and Jason White’s 6,282. Sherman is making his second run for the board of commissioners after failing to gain a nomination in 2015, bested by Irey Vaughan and Mike McCormick.

Incumbent Democrats Larry Maggi and Harlan Shober prevailed against challenger Bobby Dellorso of Canonsburg. Unofficial totals were Maggi, 10,731; Shober, 8,097, and Dellorso, 6,721. Maggi will be seeking his fifth, four-year term in November, while Shober hopes to capture his third.

Voters will have an opportunity to vote for two commissioners in the Nov. 5 general election. The three top vote-getters will win seats on the board.

In Washington County row office races, Suzanne Archer prevailed with 6,387 votes in the register of wills/clerk of Orphans’ Court race on the Democratic ballot. Bob Sabot had 3,289 while Judith L. Fisher finished second with 5,616.

On the Republican ballot for register, James Roman won a nomination with 7,511 to Jerad Cypher’s 4,440.

Carpenter will be facing Republican Tom Flickinger, who racked up 8,649 votes to David A. Borodaty’s 3,445.

Candidates in all district judge races cross-filed to appear on both major-party ballots. The lowest-level jurists in the state are elected to six-year terms.

To replace Jay Weller – who retired in January after 25 years – voters in both major parties chose Michael Manfredi, a member of the South Strabane Township and East Washington police departments and the county drug task force.

The district Weller vacated is made up of North and South Strabane townships and East Washington Borough. It’s been vacant since January, when Weller retired after 25 years in office.

Manfredi received 659 Democratic votes, or 30.5 percent of the total from that party, and another 880, or 40.2 percent, from Republicans.

The race to succeed District Judge David Mark, who’s retiring instead of seeking a fifth term, was less clear-cut. Canonsburg police Officer Chuckie Tenny and his colleague Jim Saieva appeared to be headed toward a November general election battle over the Chartiers-Houston district.

Following were two attorneys – Charles Kurowski, whose private law practice is based in Washington, and Glenn Alterio, who’s been the county’s chief public defender for more than 27 years. Alterio received 447 Democratic votes, or 19 percent, and 180 ballots – 13.3 percent – from GOP voters. Kurowski secured 206 votes, or 8.8 percent, from Democrats and 177 votes, or 13 percent, from Republicans.

In the adjacent district – which includes California, West Brownsville and Deemston, among other towns – unopposed incumbent Joshua P. Kanalis received both party nominations.

Totals aren’t official until canvassing is completed and the results are certified by the county elections board.

Republicans and Democrats were running unopposed for nomination as district attorney, prothonotary and clerk of courts.

Coroner S. Timothy Warco, a Democrat, was also trying for a Republican nomination because no candidate had filed on the GOP ballot. Countywide write-in results for the nomination were not immediately available.