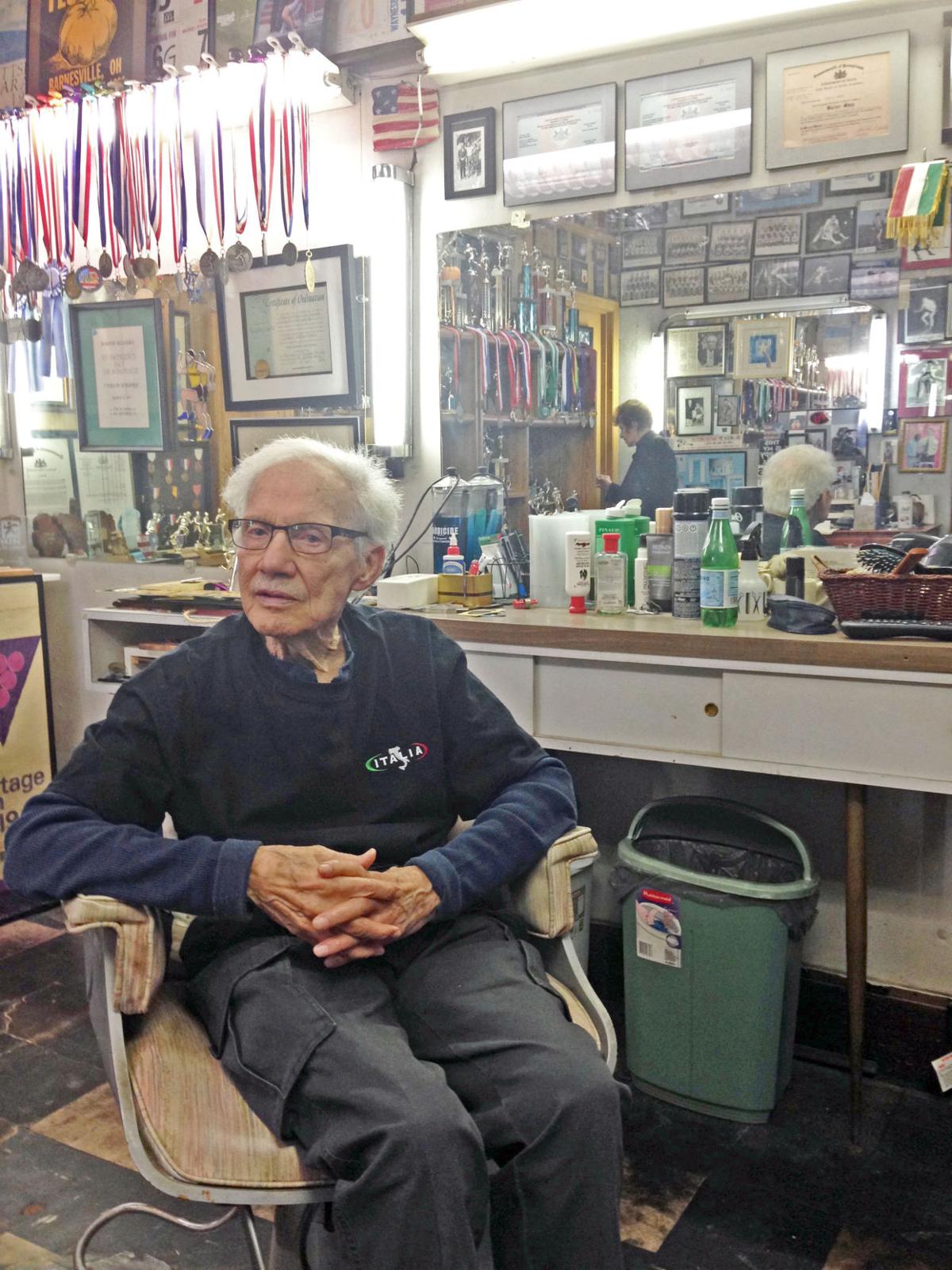 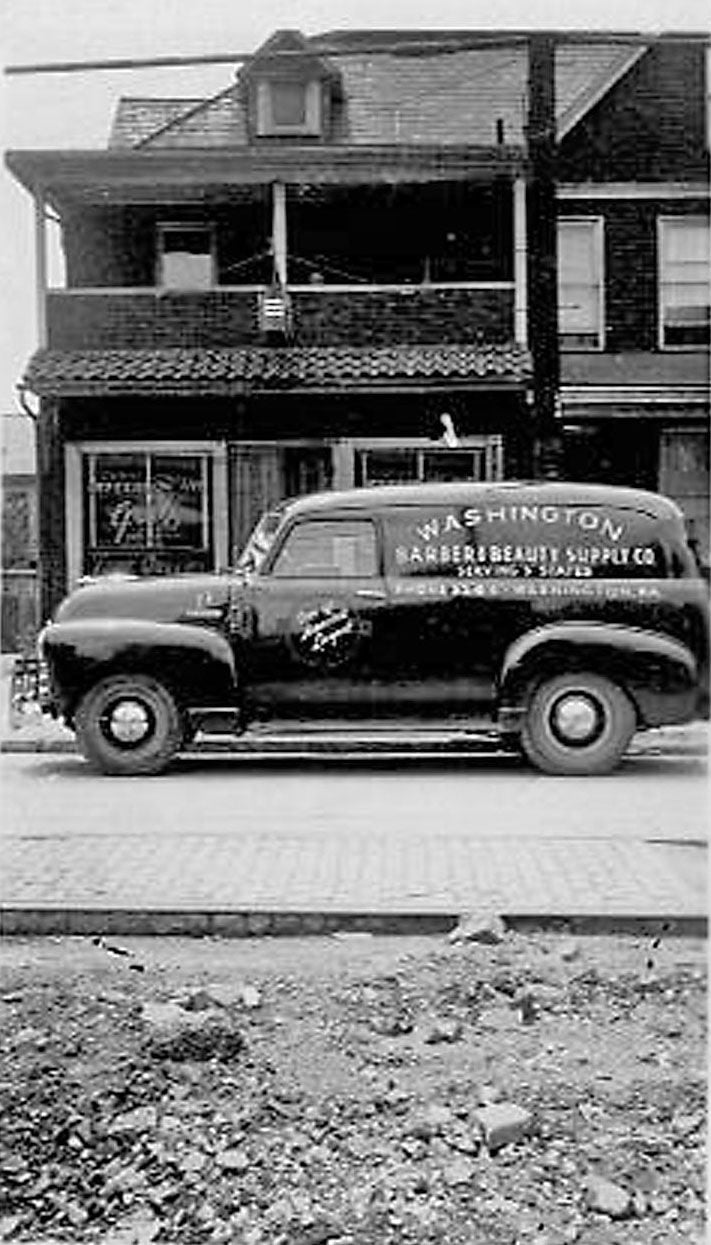 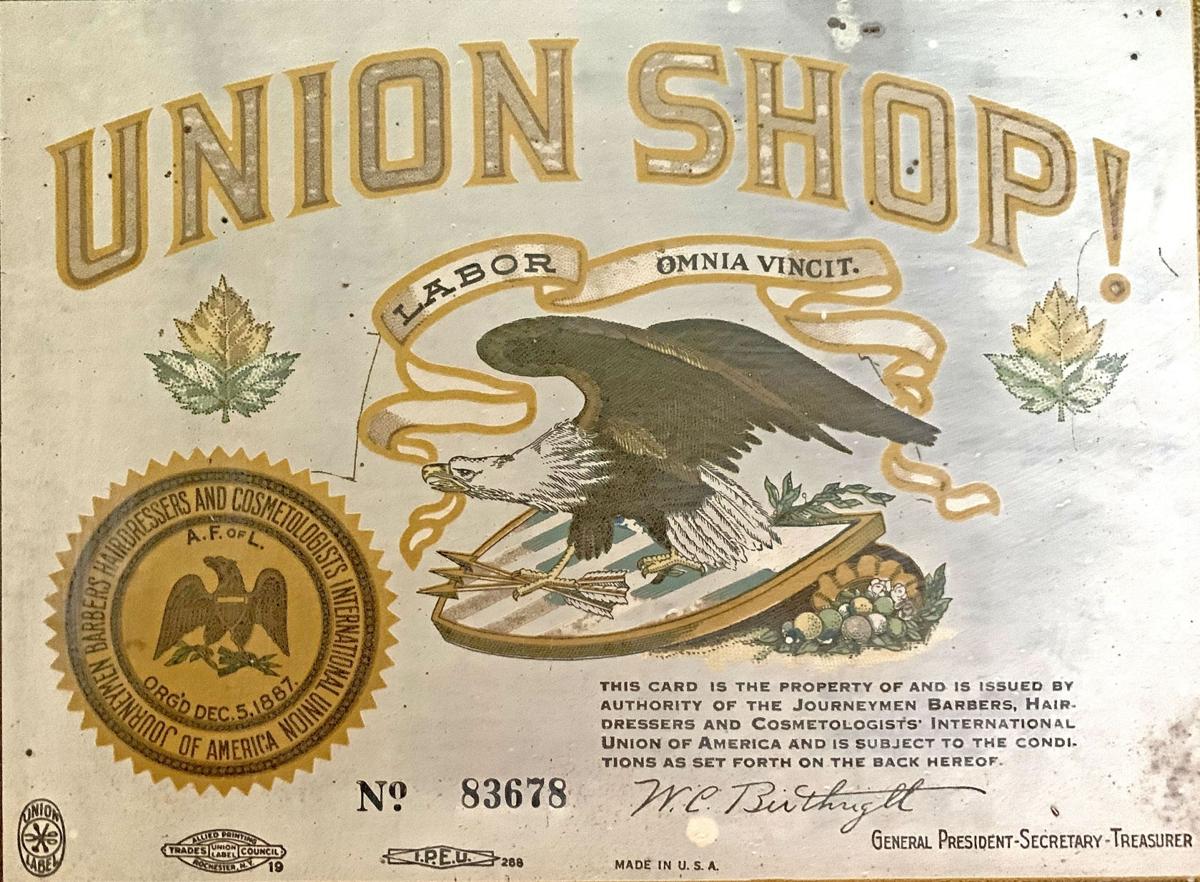 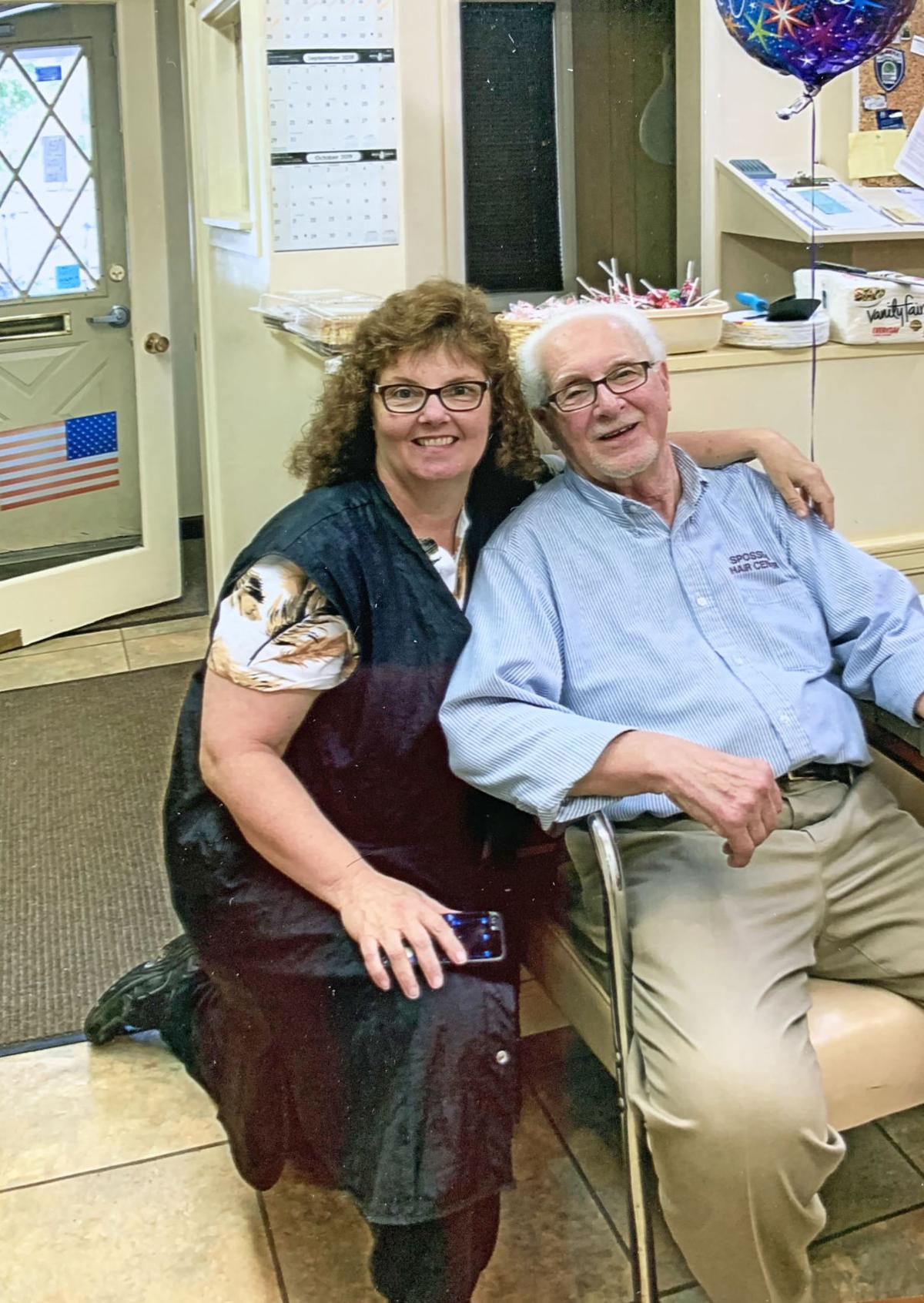 Sonny Spossey and his daughter, Lisa Spossey-Gorby, are both barbers. 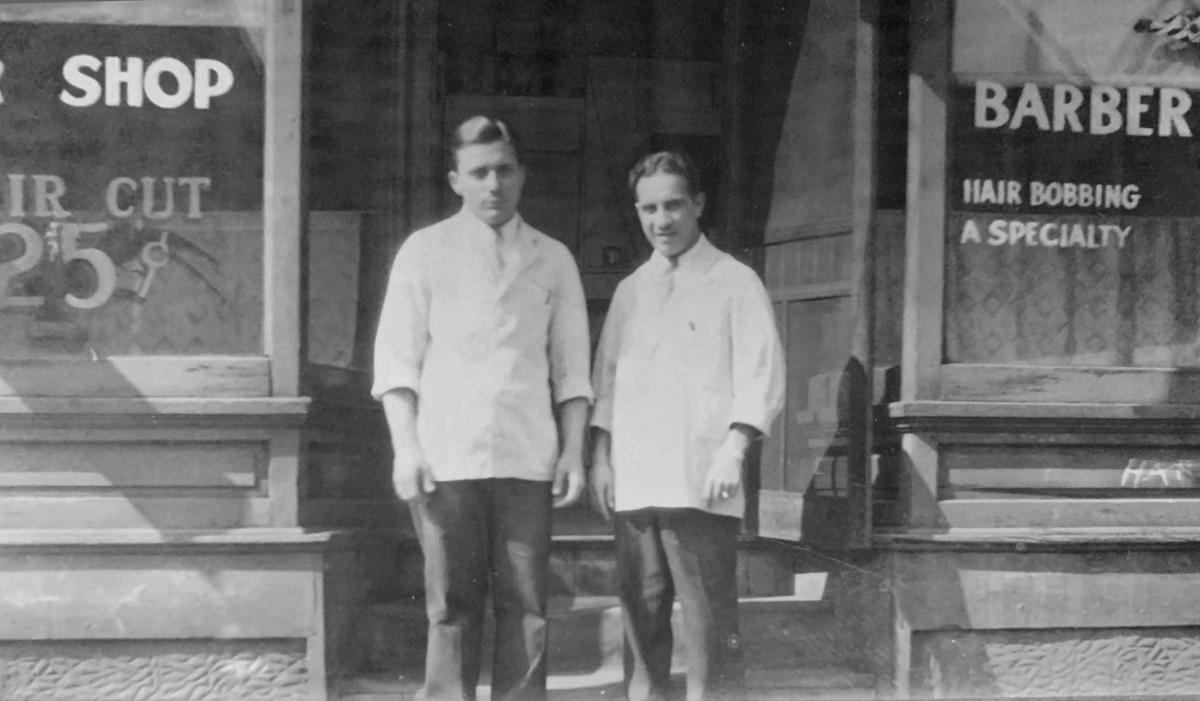 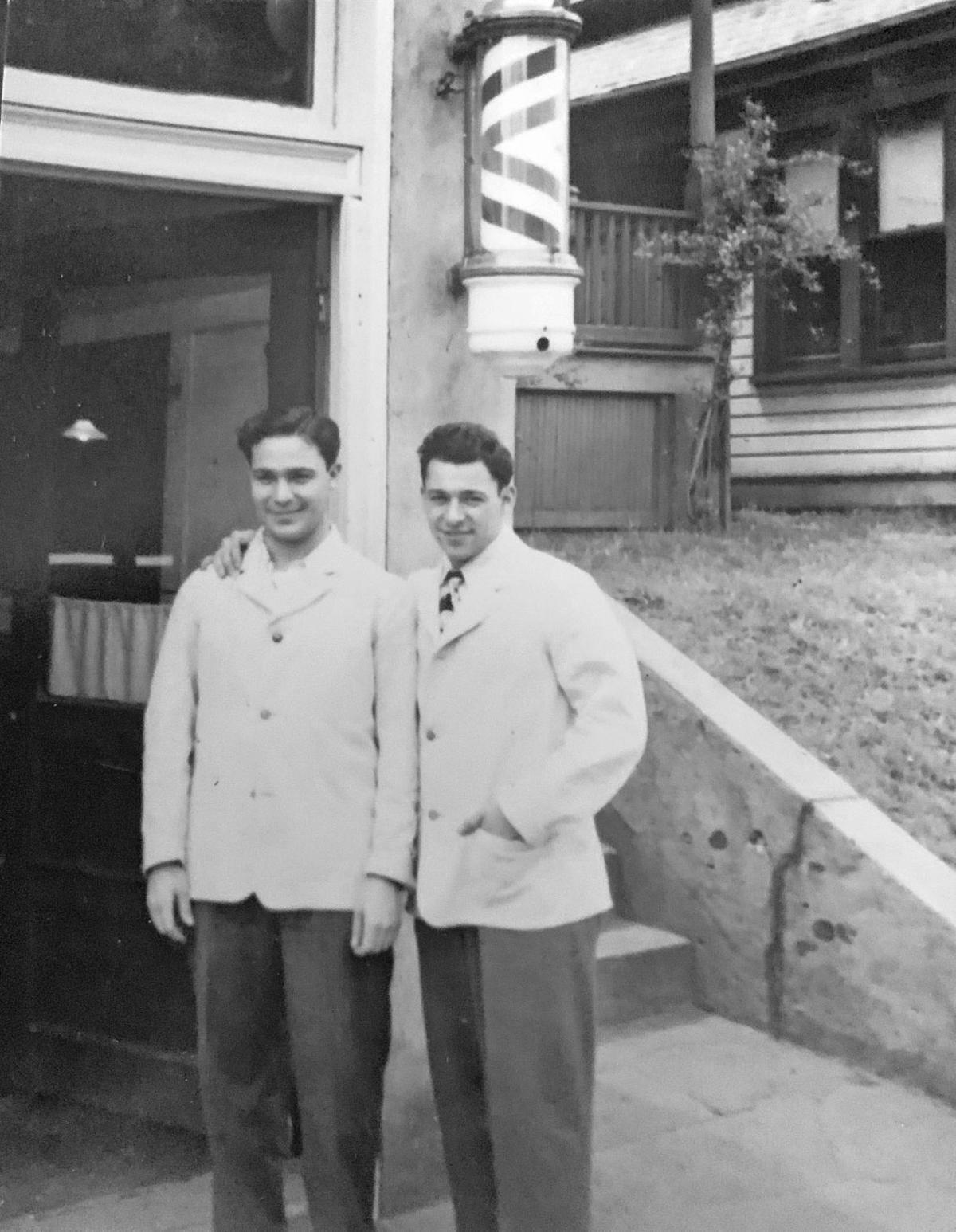 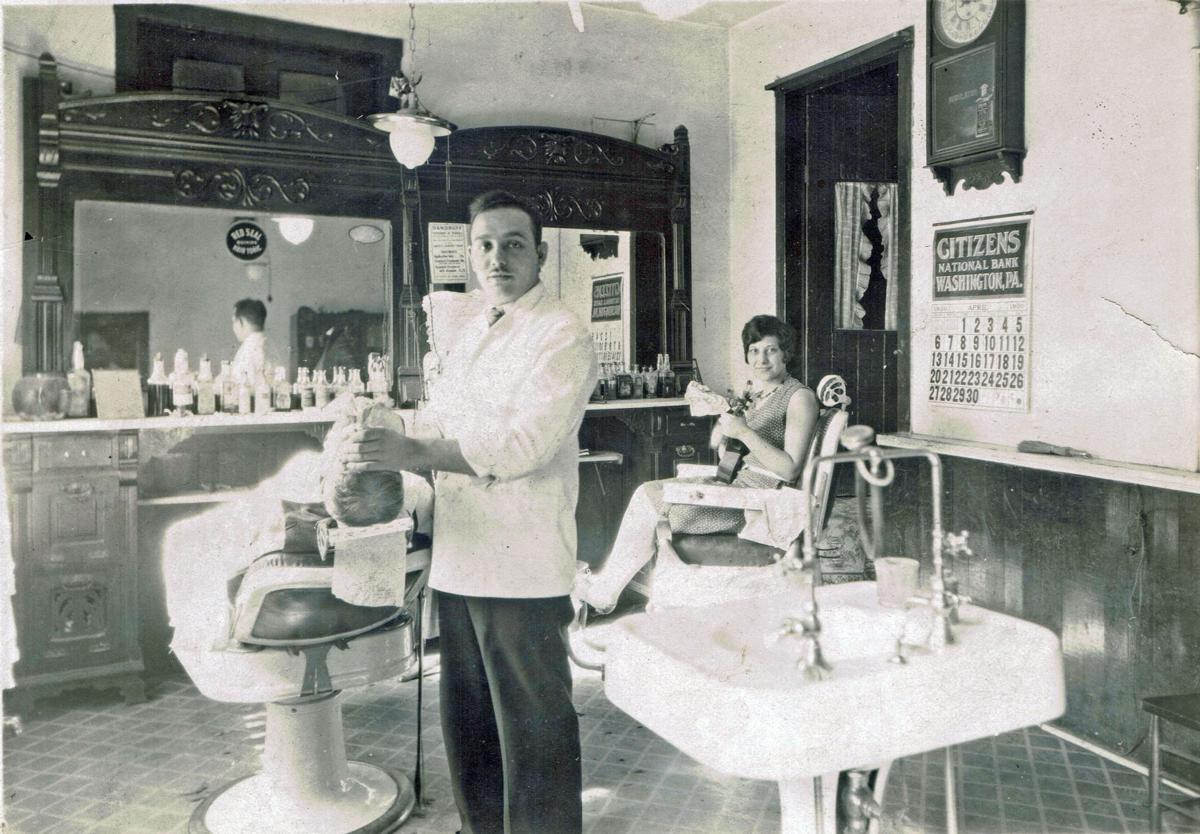 Domenic “Dee” Lucatorto works in his shop on East Walnut Street in 1930. The woman holding a ukulele is a relative of Lucatorto’s wife, Rose.

Sonny Spossey and his daughter, Lisa Spossey-Gorby, are both barbers.

Domenic “Dee” Lucatorto works in his shop on East Walnut Street in 1930. The woman holding a ukulele is a relative of Lucatorto’s wife, Rose.

Italian Americans are known for barbering – an occupation that combines artistry, precision and personal service. The career didn’t have much of a presence in the United States until Italian immigrants arrived here.

During the years of mass emigration from Italy – 1880 to 1930 – nearly four million Italians, mostly from southern Italy and Sicily, settled in the United States. Hundreds came to the city of Washington. They worked in a variety of industries, founded businesses and created a barbering culture where there once was none.

“There was a barbershop on every corner back then,” said 87-year-old barber Don Zenner. “Without exception, they were all Italians.”

By the middle of the century, the city had 35 union barbershops and 52 union barbers, said Rich Sonson, who at age 72 is Washington’s oldest working Italian barber.

Zenner, Sonson and many of their colleagues in the tonsorial arts will be honored during Saturday’s Washington Italian Festival.

Barbering has a long history.

The term “tonsorial,” meaning to groom hair and beards, comes from the Latin word for “shear.” Barbering tools dating back 7,000 years have been discovered in Egypt.

In Italy and Greece, the barbershop as a place for men to gather was popular more than 2,000 years ago.

In the middle ages, barbers not only cut hair and shaved customers, but also dressed wounds, extracted teeth and performed blood-letting and leeching. The red in the iconic red, white and blue barber pole symbolizes blood. By the fourteenth century, barber and surgeon became two separate career paths.

Don Zenner’s shop at 332 South Main St. evokes the era when he cut hair next to his late father Frank Zenner, whose original family name was Zenone.

Although Zenner, 84, is retired, the 1940s-era shop remains intact, complete with a vintage barber pole. Washington & Jefferson College students often peer into the windows and inquire if it is still open, he said.

Zenner is one of only six living barbers who are the sons of Italian barbers. The others are Lou Dagostino, 89, son of the late Tony Dagostino; Floyd Marasco, 96, son of the late Salvatore Marasco; Rich Sonson, 72, and his son Rich Jr., 49, who are son and grandson, respectively, of the late Vincent Sonson; and Sonny Spossey, 82, son of the late Louis Spossey.

Daughters also followed their fathers into the profession.

Alma Zenner DonGiovanni, 89, also worked in the Zenner family shop. Lisa Spossey-Gorby, 58, has worked alongside her father, Sonny, for 39 years.

Vincent Sonson, born in 1919, opened a barbershop on the enclosed porch of the family’s Addison St. home in 1960. Vincent influenced his son to go into barbering. He, in turn, influenced his own son to do so. Father and son now operate Rich’s Barber Shop at 33 W. Chestnut St. Their extended family has a total of nine barbers.

Barbering brothers were also common. Floyd Marasco, 96, fondly remembers barbering with his father Salvatore and brother Gene in his 2010 memoir “Tylerdale.” Other local barbering brothers include the Luppinos, Miscios and Ciminos.

In addition to family bonds, strong relationships among barbers developed.

Throughout Rich Sonson Sr.’s career as an earth science teacher and coach in Carlynton Schools District, he barbered part-time with Steve Kouklakis, with whom he apprenticed as a teenager in the 1960s. In 2009, he bought Kouklakis’ shop.

The Zenner shop on South Main St. was preceded by a shop a few doors away that Frank Zenner bought from Battista D’Alessandro, an immigrant from Foggia in southern Italy.

Battista’s son, Jim, who died in 1998 apprenticed with his father before branching out to open shops with partner Tony Luppino in the Washington Trust building and George Washington Hotel. In 1959, Jim was elected city magistrate, an office he held for 25 years.

“My dad moved a barber chair into the back room of the magistrate office,” said Jim D’Alessandro Jr., 70, a retired county sheriff who still lives in the building where his grandfather Battista groomed customers more than 100 years ago. “If a friend needed a haircut, my dad did it.”

D’Alessandro said his grandfather, Battista, had a scar on his face from an encounter with members of the Black Hand who demanded protection money. Battista warded off the extortionists with his straight razor. His grandson proudly owns that razor today.

Shaving was an important part of the business, D’Alessandro noted.

“They sharpened the razor on the leather ‘strope’ that hung down side of the chair,” he said.

Sonny Spossey – former four-term Washington mayor – is the son of an Italian barber who opened his first shop in Washington around 1940 on West Chestnut St., not far from the shop that Sonny retired from this summer after 64 years of service.

Louis Spossey’s original surname was Esposito. A schoolteacher in his hometown of Brownsville changed it, Sonny Esposito said.

“The teacher decided that’s what they were going to call him,” Sonny Esposito. “’You’re going to be Spossey from now on.’”

Sonny Spossey was a longtime officer of Barbers Local 285, a group that thrived in spite of an inauspicious beginning.

Barber Lou Dagostino said a union organizer from Chicago came to town in the 1940s to recruit members and collect dues. He then took off with the money. Despite the setback, local barbers stayed together and formed a union of their own that still exists today.

Dagostino worked in his late father’s shop at 242 South Main St. for 20 years. Tony Dagostino and his friend, Tony Musto, left jobs at Hazel Atlas No. 1 to pursue careers as barbers in order to gain more autonomy over their careers.

Barber Dominic “Dee” Lucatorto, born in 1908, got his start in Canonsburg with America’s most famous singing barber, Perry Como.

In 1940, Lucatorto founded his own shop on Washington’s East Walnut St. When Dee had a fatal heart attack in 1952, his 17-year-old son, Bob “Lucky” Lucatorto, dropped out of school and took over the business to support his mother and himself. Fifty-six years later, he retired from the shop, but continued to cut hair part-time until weeks before his death in 2017, said his son Bob Jr.

Scott Luppino, 77, a retired state trooper, has vivid memories of his barbering uncles Joe and Tony Luppino, born in 1906 and 1912, respectively. As a teenager in the 1950s when longer hair like Elvis Presley’s was coming into style, Scott Luppino could not join the trend.

“I would never have had that kind of haircut, because Uncle Joe cut my hair. He was old school. When I went into the Navy, they didn’t have to cut off much,” Luppino said.

So, what makes Italian barbers so special?

“They’re artists,” said Don Zenner, noting the old Italian barbers could produce the kinds of haircuts that actors wore in classic movies. “Italians are always the best at what they do.”

The barber’s temperament is equally important, said Sonny Spossey. Being a good listener and having an interest in people.

“They had their fingers on the pulse of the community,” said Scott Luppino.

Then as now, the barbershop was a place to share news and opinions.

As time moved on, barbering evolved. Aspiring barbers went to school instead of seeking apprenticeships. Some went into hairdressing. In addition to barbers, the city’s notable Italian hairdressers, educators and suppliers will also be recognized at the festival.

In the 1970s, Don Zenner and his father Frank took a step into fashion-forward hairstyling for men with a shop called Private World. Located at 150 West Beau St. for 10 years, the men’s only shop was the only one of its kind in the tri-state area.

Hairdresser Tony Zenner, 84, became a specialist in hair chemistry, formulating permanent wave solutions that could be customized to every client. He operated Town House Salon at the corner of Spruce and North Main for 40 years.

Carmen Alberta, 84, owner of Carmen’s Hairdressers on Oak Spring Road, has been a hairdresser for 61 years. His older brother, Joe, was a barber who influenced his choice of profession. Carmen’s son, Larry, and daughters, Debi and Denise, carry on the family tradition.

The late Irene Patrene founded Irene’s Beauty Academy, which operated in Washington and Houston from 1957 to 1978. Although not Italian, the pioneering hairdresser and entrepreneur was married to an Italian American, Robert Patrene, who was also a hairdresser. The school trained thousands of students, many of them women who opened businesses in their homes, said son Robert Patrene, 76.

He and his siblings, Barbara and Irene, also went into hairdressing. Over 60 Patrene relatives have barber or hairdressing licenses, he said.

Washington Barber & Beauty Supply Co. started when barber Jim Morosco began bottling “Fertile Hair Tonic” in 1929. Jim’s father Saverio and brother Sam, both barbers, joined him to establish the business on the corner of Jefferson and Wylie avenues. It grew into one of the nation’s largest manufacturers and distributors of hair products.

Tina Calabro is volunteer project manager of the Italian Heritage Collection at Citizens Library. She can be reached at tina.calabro@verizon.net.