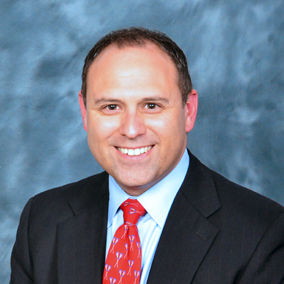 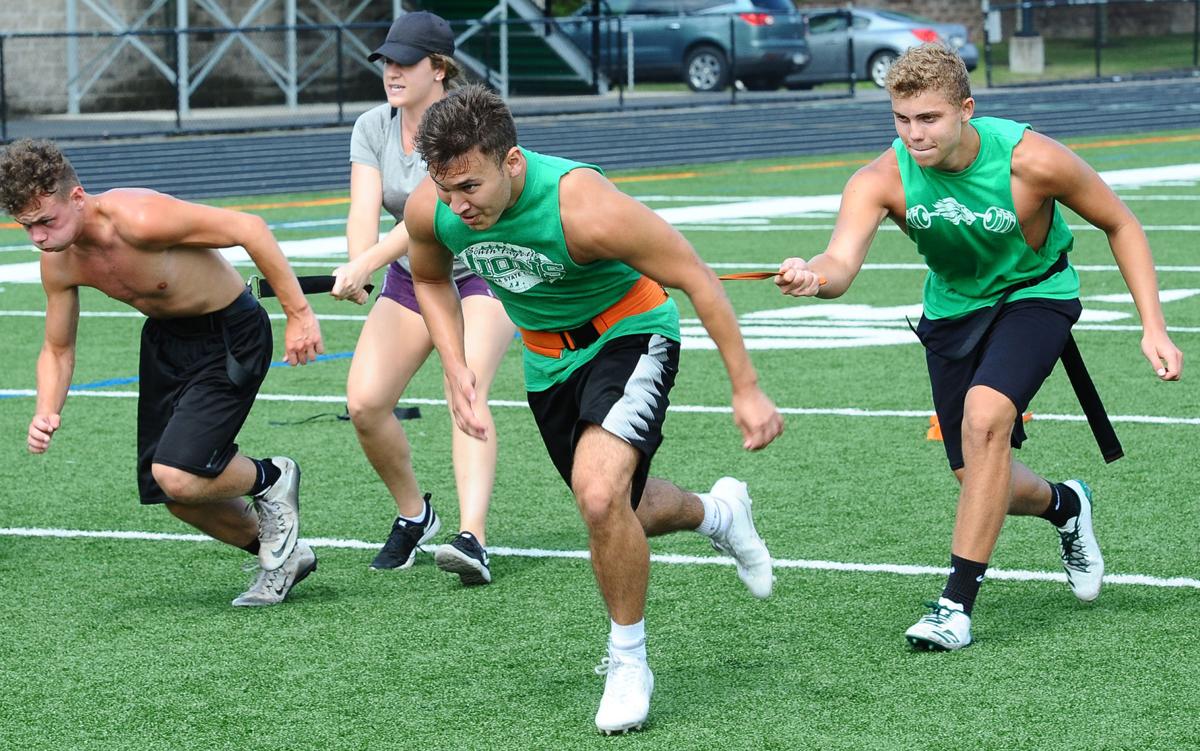 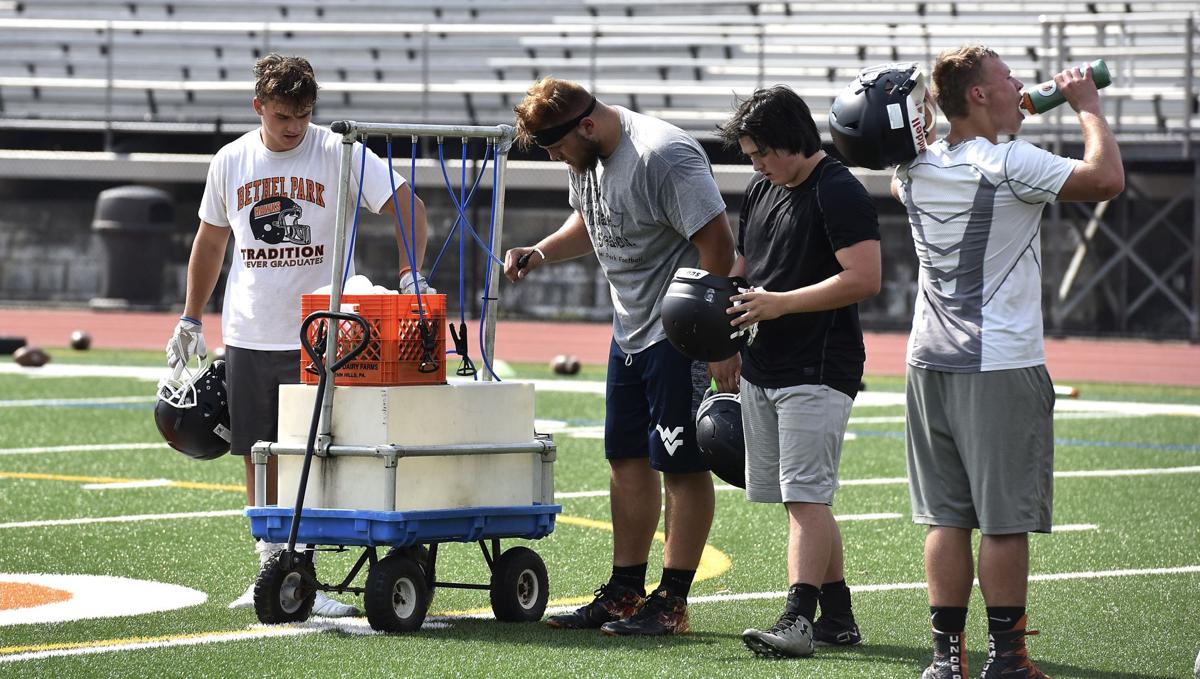 Bethel Park players hydrate during a break in practice. 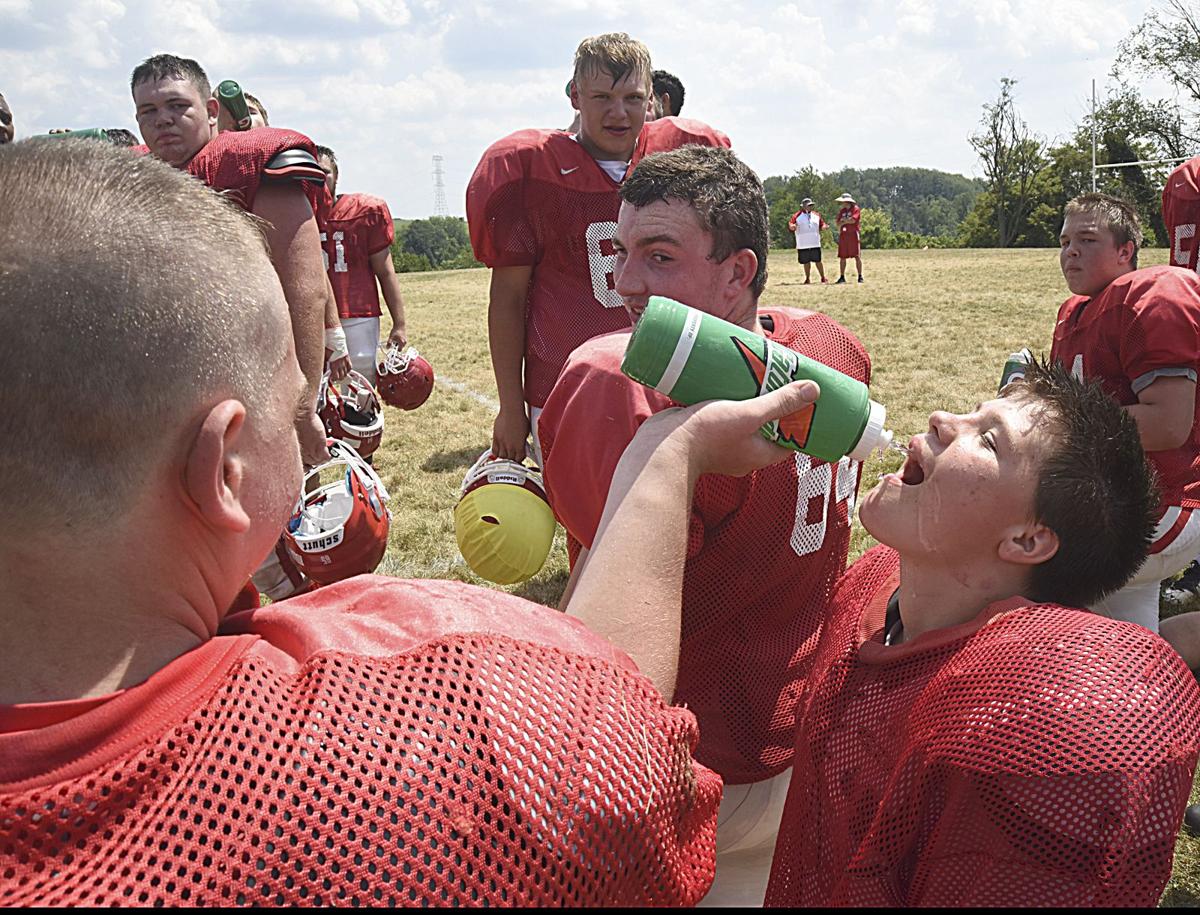 Former Fort Cherry football player Mason Sweetie, right, cools off with a drink with help from Alex Orenbaun during a break in the Rangers’ preseason camp.

Bethel Park players hydrate during a break in practice.

Former Fort Cherry football player Mason Sweetie, right, cools off with a drink with help from Alex Orenbaun during a break in the Rangers’ preseason camp.

It also marks the start of two-a-day practices for area high school football teams and the most stressful time on athletes’ bodies. Now, a new study shows this high intensity conditioning during the hottest part of the year may sometimes lead to health problems.

A new study presented at American Orthopedic Society for Sports Medicine’s annual meeting shows most nontraumatic fatalities among high school and college football athletes do not occur during football games, but rather during conditioning sessions. The study shows these practices are often associated with overexertion or punishment drills required by coaches or staff.

The research was presented by Dr. Barry P. Boden of The Orthopaedic Center, Rockville, Md.

Football is associated with the highest number of fatalities of any high school or collegiate sport, but the good news is the number of traumatic injuries incurred while playing football has declined significantly since the 1960s.

While so much attention is now being focused on concussion protocol, this study shows there are other steps coaches, staff and physicians can take to prevent football fatalities. In the study, researchers reviewed 187 nontraumatic football fatalities that happened between 1998 and 2018. The findings show 52% of them were because of cardiac issues, 24% were caused by heat and 5% from asthma.

What’s even more notable is the majority of these deaths occurred in August rather than during the regular football playing season.

Boden said many of the fatalities had three issues in common: conditioning sessions supervised by a coach or staff, irrationally intense workouts and inadequate medical response.

Dr. Todd Franco, Sport Medicine Physician with Allegheny Health Network, said the bottom line with this study is the importance of so-called “routine” physicals that athletes must complete to play.

“It’s really about nontraumatic injuries,” Franco said. “Obviously, that’s a challenge associated with sudden cardiac death which has a very high rate in both football and basketball. But I think the takeaway is really about the importance of pre-participation physicals, knowledge about your athletes and understanding their medical history and their family history.”

Franco is the team physician for Chartiers Valley High School and also works with Peters Township, Bethel Park, Upper St. Clair and other school districts in sports medicine. He said this study looks at a different aspect of football injury as compared to those caused by contact.

“Definitely very different than what we’re used to being exposed to in the media as far as concussion and spinal cord injuries,” he said. “Those are all clearly traumatic. This is stuff that happens without contact, without an event. It’s just some type of cardiac issue or other medical problem that obviously turns into something very scary.”

The study emphasizes the risk of these fatalities can be lowered significantly with some simple steps.

“A lot of it has to do with the intensity of the workout and the time of year of the workout,” Franco said. “But more importantly, I think what a lot of this article tried to emphasize was it’s important for coaches’ strength and conditioning staff to be aware of the heat and then to pay attention to their athletes and train these people and such.”

August is a hot, humid time of year when football practice commences.

Franco noted every athlete has a different starting point as far as their conditioning and that it’s important not to overly push or train at the start of the year in the hottest weather.

Another key component is the physical exam and looking for signs of trouble.

Franco said it’s very important from a primary care or sports medicine doctor’s perspective to understand what to look for when conducting a physical for participation clearance.

“These cardiac fatalities that occur in young folks are very different than the older populations,” Franco said. “Older athletes have issues with cardiac disease, high cholesterol and plaque formation. These athletes don’t have any of that.”

He said cardiac events in young athletes typically stem from some type of structural abnormality of the heart.

“So something called hypertrophic cardiomyopathy where the heart swells in a certain location... that’s the leading cause of sudden cardiac death,” Franco said. “Or a problem with abnormal heart rhythm that is stimulated by exercise.”

That’s why he stresses the most important part of the sports physical is taking a family medical history.

“Most of these things have some genetic link to them,” he said, “so if you can identify if anybody else in your family ever died from a cardiac related injury before the age of 30 then that could trigger you to start to dig a little deeper into these issues.”

He adds most of these athletes may have no symptoms, but it’s crucial to ask if they ever get lightheaded or dizzy with activity or pass out because those can be clues as well.

The physical exam is also key for finding clues.

“When you take the stethoscope back and listen to their heart,” Franco said, “you can find some things subtly that can stimulate an interest to say will this person need a further cardiac workup before we clear them.”

Franco said the issue has stirred debate in the sports and medical communities about whether further testing should be done including EKGs to check athletes’ heart rhythms. That gets expensive and many argue the benefits are not worth the enormous outlay of time and money.

“But I think ultimately, if this continues to happen, I think you’re going to see a bigger and bigger push,” Franco said, “and that’s why studies like this exist.”

The bottom line for athletes and parents, he said, is to take those pre-participation exams seriously.

“They think that they’re not important but the reality is those can provide significant clues to prevent some types of catastrophic events like this,” Franco said.

He added parents need to play an active role in providing detailed family medical history during the exam.

“Because then we can do what we need to do to further evaluate places where we think there may be a concern,” Franco said. “Everybody wants to go through these physicals quickly and not be held out of athletics, but in some instances I think it’s better to be safe than sorry.”