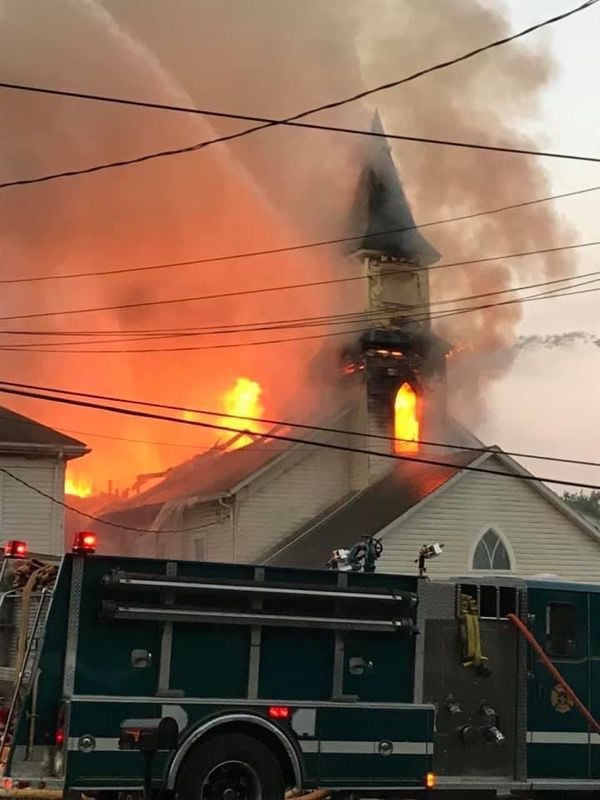 Mapletown United Methodist Church and an adjacent house were gutted by a fire on July 4, but the Rev. Lanfer Simpson, the church’s pastor, said the generosity and kindness of community members and the dedication of volunteer firefighters sent a strong message of hope. 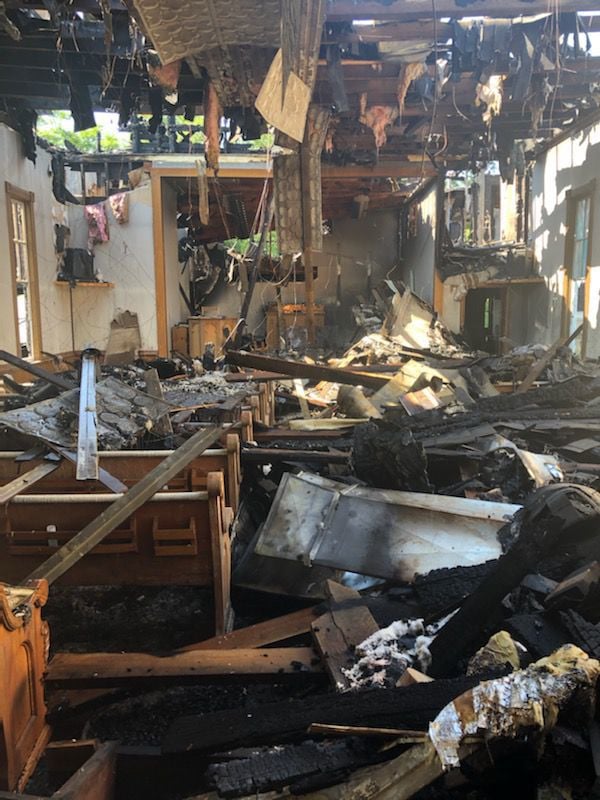 Despite the inside of the Mapletown United Methodist Church being destroyed by a July 4 fire, the Rev. Lanfer Simpson said the “church” – meaning the group of people who worship there – is still intact.

Mapletown United Methodist Church and an adjacent house were gutted by a fire on July 4, but the Rev. Lanfer Simpson, the church’s pastor, said the generosity and kindness of community members and the dedication of volunteer firefighters sent a strong message of hope.

Despite the inside of the Mapletown United Methodist Church being destroyed by a July 4 fire, the Rev. Lanfer Simpson said the “church” – meaning the group of people who worship there – is still intact.

Days after Mapletown United Methodist Church and an adjacent house were gutted by a devastating fire, the church’s pastor said what he will remember most about the fire will not be the destruction of structures and the material losses.

Indeed, what the Rev. Lanfer Simpson will remember is the strong demonstration of God’s work, of community spirit and pride, and of great hope.

The fire was first reported around 5 a.m., and three children – an infant, a 5-year-old girl and a 7-year-old boy – and their parents living in the house adjacent to the church were able to escape.

The fire is believed to have started in the laundry room of the two-story house, located at 1000 Mapletown Road, and quickly spread to the church. The cause of the fire is still being investigated by the state fire marshal.

Simpson said the family members were taken to Ruby Memorial Hospital in Morgantown, W.Va., for treatment, but no serious injuries were reported, and they were all released from the hospital the same day.

The family did lose everything in the fire, prompting Simpson to encourage community members on social media to donate clothing and shoes. In the span of three days, he said the family received an overwhelming amount of help.

“Over the last 72 hours, we have truly witnessed the work of God,” he continued. “The community rallied and united for this family because they care.”

“There were 90-plus firefighters on-site from the first report all through early afternoon,” he said. “The fire was mostly contained by mid-morning, but many selfless volunteer firefighters stayed to make sure it was completely extinguished.”

Simpson said he received a call from a parishioner who lived near the church shortly after the fire started, and when he arrived he immediately talked to the family members to make sure they were OK.

“They were being treated and cared for at the ambulance, and all they could do was apologize, which I told them wasn’t necessary,” he recalled. “I just wanted to make sure they were being comforted and that they were safe, and I was very thankful that by God’s good grace, their lives were spared.”

As he posted on Facebook, Simpson said that despite the church building’s structural damage, he takes comfort in that the “church” is still intact.

“It is the group of people, those who have called upon the name of Jesus, who make up the church,” he said. “The building itself is a visual symbol, a structure that allows worshipers to congregate and find closeness. But that closeness is only valuable if we take it outside of the church.”

Simpson, who on July 1 celebrated the fifth anniversary of being appointed as the church’s pastor, held an online Facebook live church service on July 5, something that he had been doing from his home since COVID-19 started.

The church did reopen on the two Sundays prior to the fire while adhering to Centers for Disease Control guidelines, but Simpson said the Facebook live services will continue.

He added that the church’s goal is to “move forward” – using another physical structure that will be determined later for services, while still continuing to offer church services online as an option for parishioners.

Simpson said plans are also being discussed to hold a public gathering in the near future so people can share photos, stories, letters, newspaper clippings, historical artifacts and other special memories of the church.

In the meantime, Simpson said he simply cannot stop expressing his amazement and gratitude toward those who have selflessly and generously donated clothing, money, food and time to help the family who lost everything in the fire.

“The incredible outpouring of love and support was, and continues to be, a blessing beyond measure,” he said. “The way the community at large responded to this tragedy, it certainly sends a powerful message of hope, which is something desperately needed in our troubled times.”

Currently, the family is staying with relatives, and they intend to eventually build a house sometime over the next few months. Simpson said donations of household items would be greatly appreciated when the time is right, and anyone interested in donating may contact him at 412-496-2868.

Updated information will also be posted on the church’s Facebook page, he added.

“Whatever people feel are called to share would be much appreciated,” he said. “In the meantime, the family can never have enough prayers and well-wishes to help them get through this ordeal.”

Simpson commended the firefighters who not only worked diligently to save lives and prevent the fire from spreading, they also helped make the day a little better for the 5-year-old girl.

“The day the fire happened was also the girl’s birthday, so when they returned from the hospital the Greensboro fire company stopped by and gave her birthday presents,” he said. “It was important to them that that little girl had something special, something positive happen for her birthday. That’s just another example of how hope can be found in even the bleakest of times.”

Simpson said it is that hope, that positivity, that sense of community spirit that will prevail.

“What everyone did to help that family will hopefully be talked about for generations to come,” he said. “Years from now, people who remember this fire will remember when the community came together, in a time when our world was so divided. It would be a great injustice to the fire companies if the story isn’t continued to be told.”