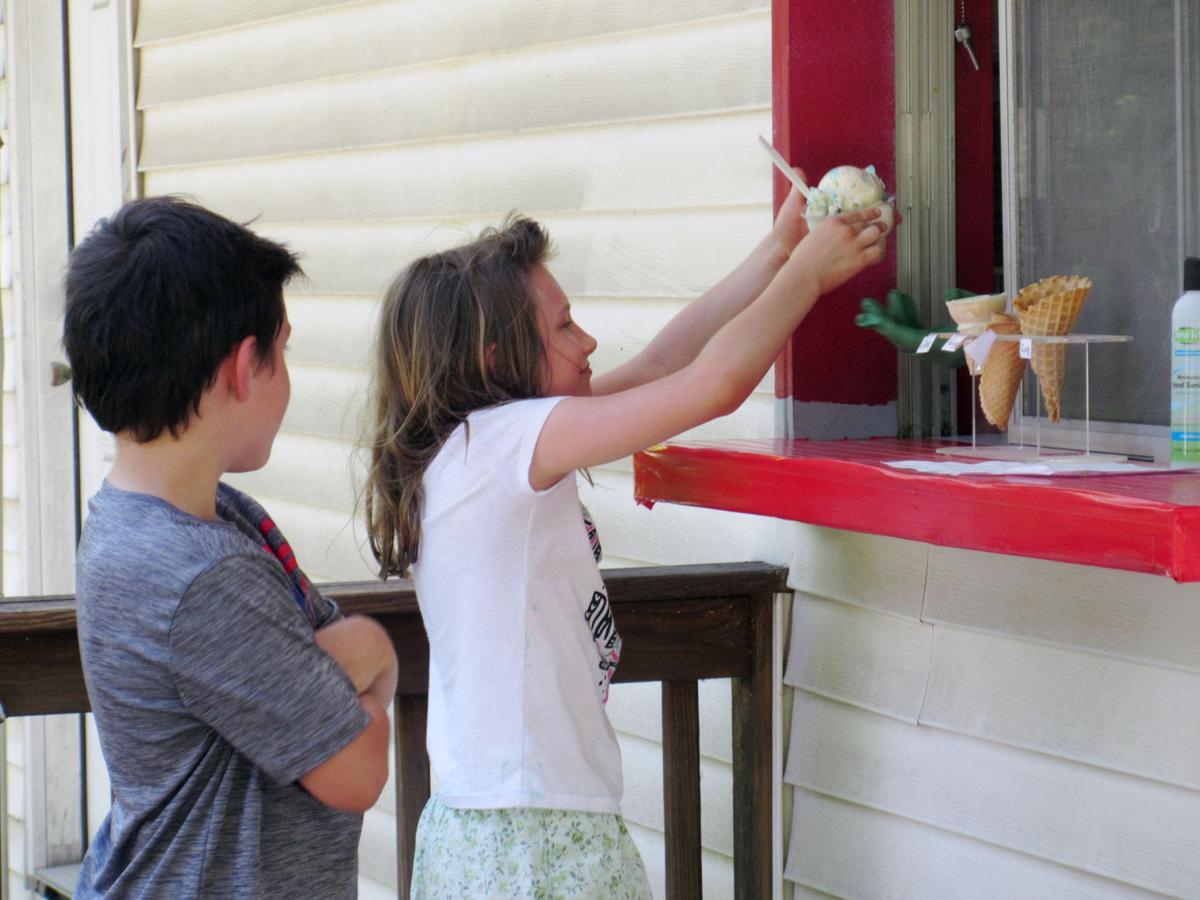 From left, 8-year-old twins Quintin Fordeley and Sawyer Fordeley, get ice cream at The Tandem Connection, in Cecil Township, after a Tuesday afternoon bike ride on the Montour Trail. 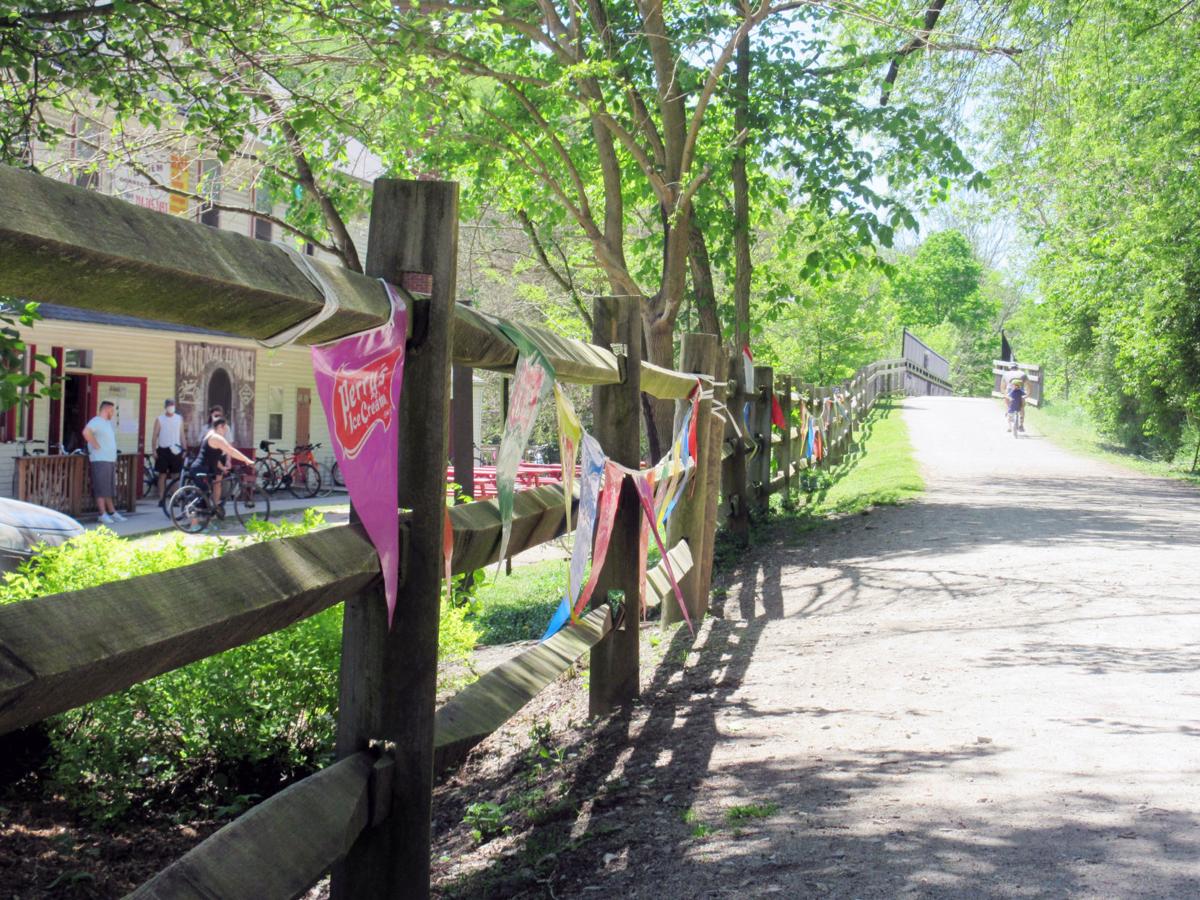 Bicyclists took to the Montour Trail Tuesday at The Tandem Connection, a bike and ice cream shop located just off the trail in Cecil Township. 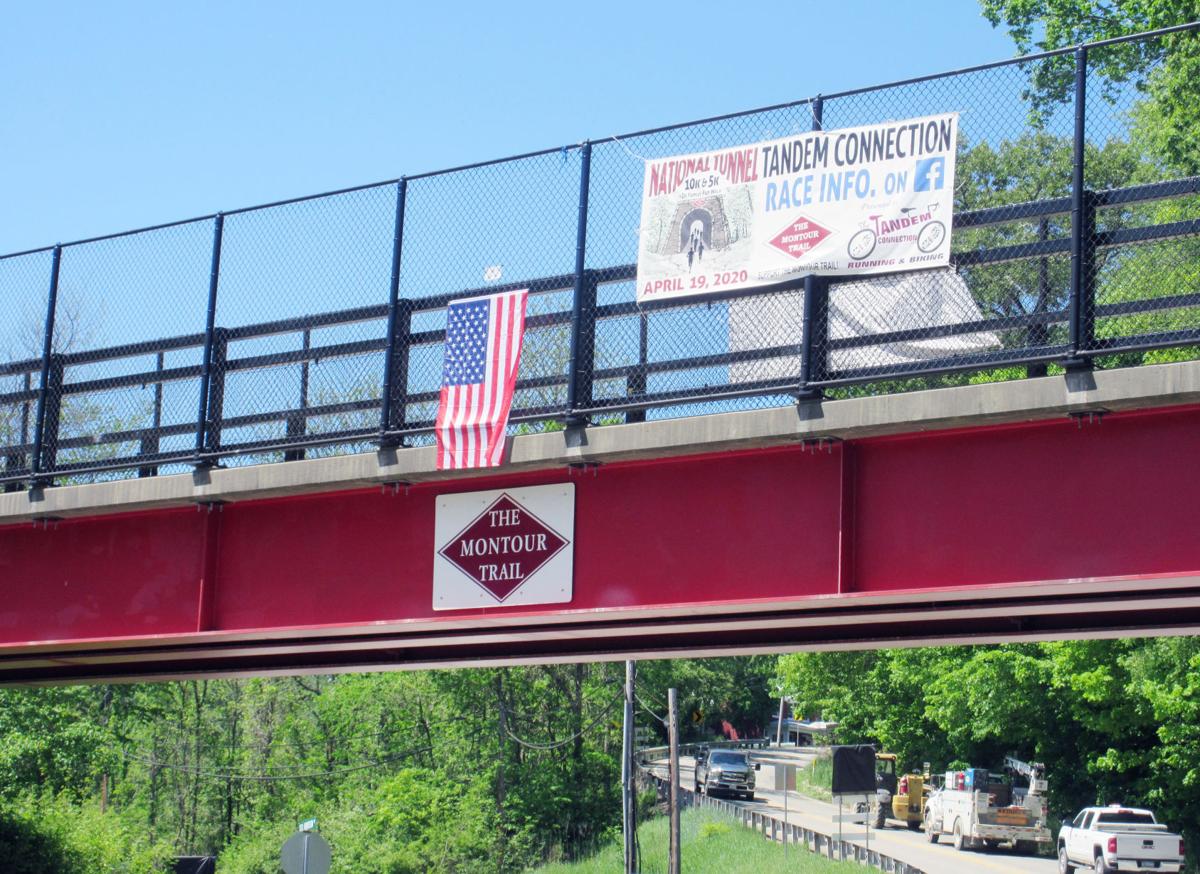 The Montour Trail, which stretches 46 miles across Washington and Allegheny counties in Pennsylvania, saw a lot of bicycle traffic over Memorial Day weekend. 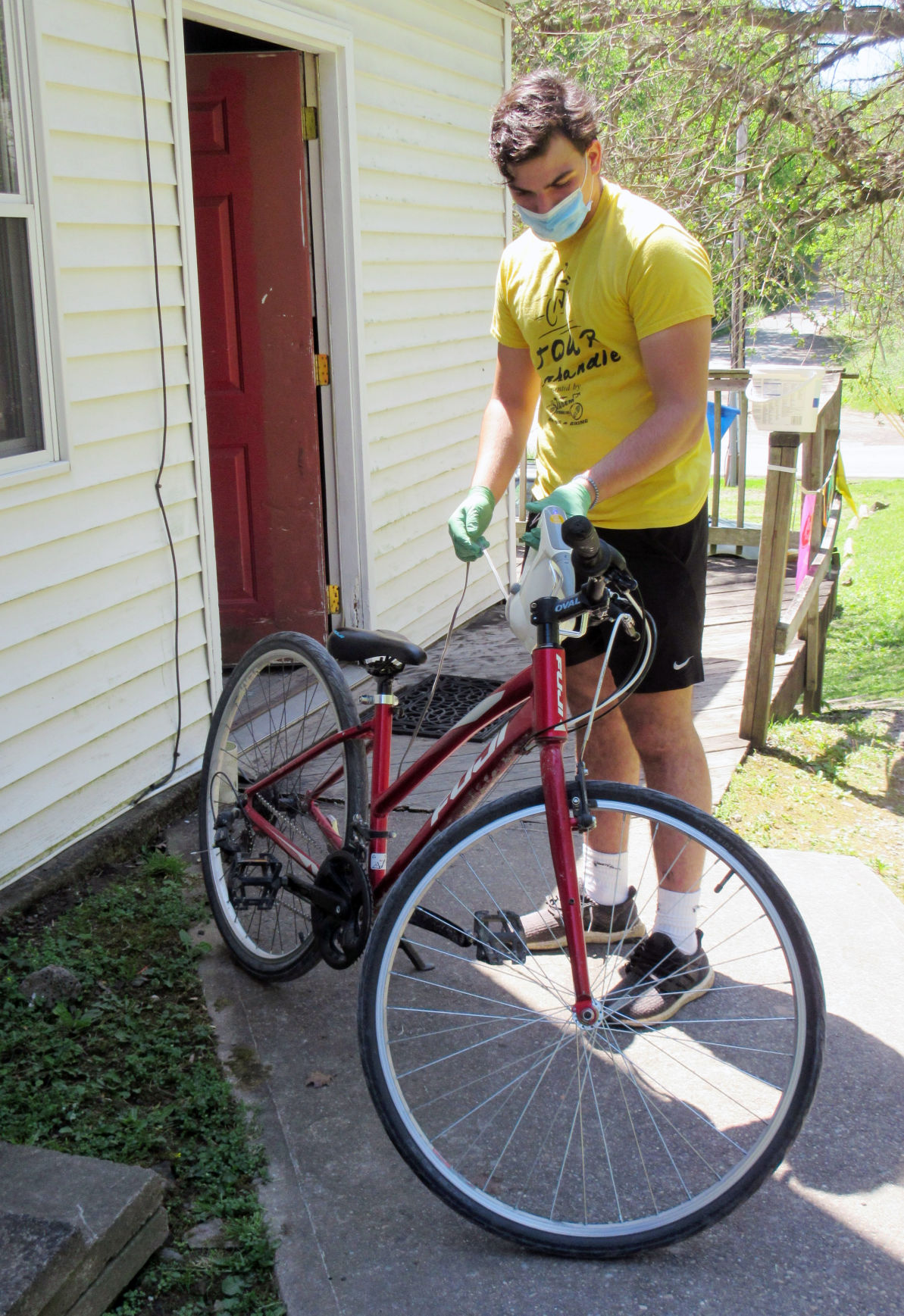 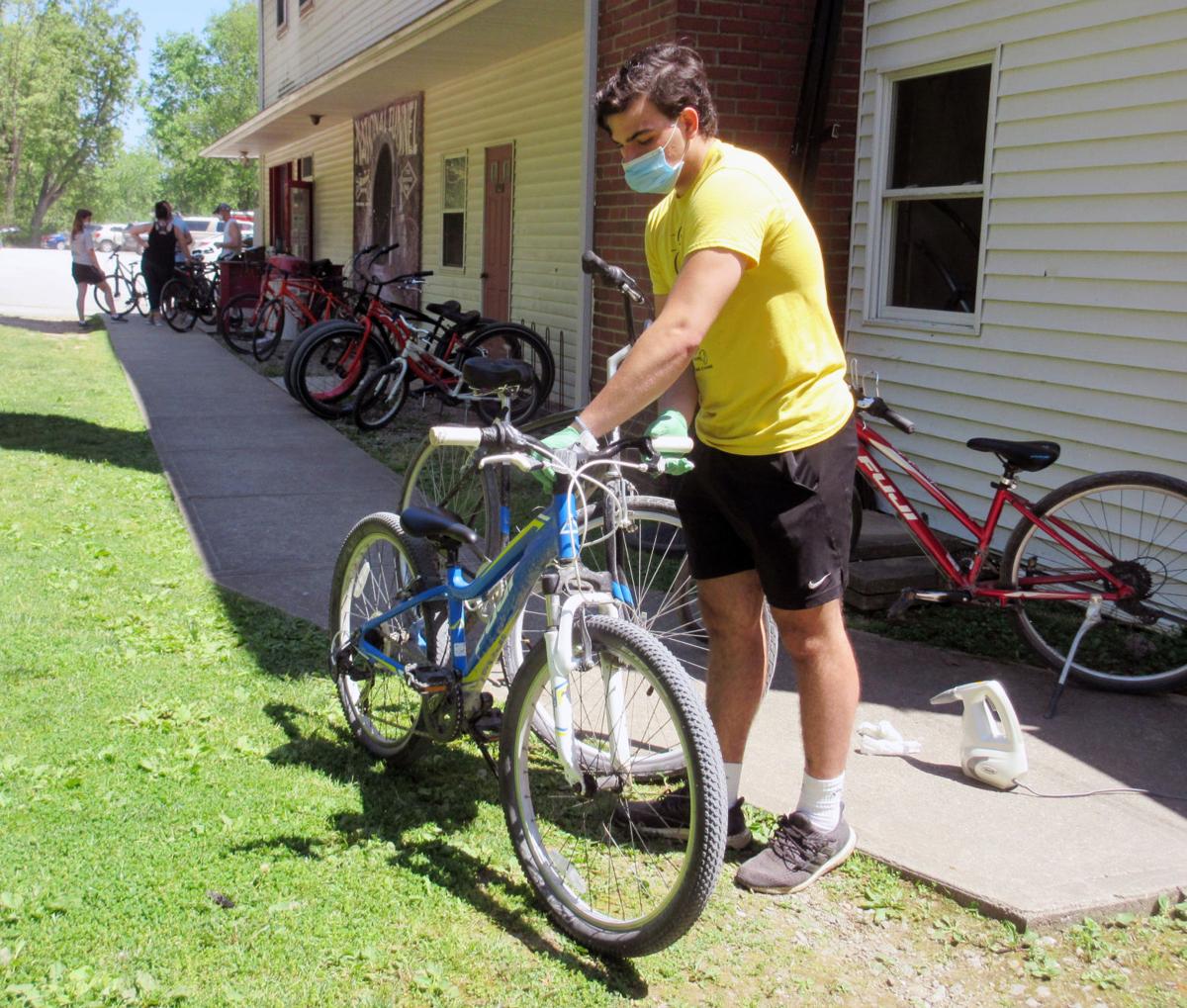 From left, 8-year-old twins Quintin Fordeley and Sawyer Fordeley, get ice cream at The Tandem Connection, in Cecil Township, after a Tuesday afternoon bike ride on the Montour Trail.

Bicyclists took to the Montour Trail Tuesday at The Tandem Connection, a bike and ice cream shop located just off the trail in Cecil Township.

The Montour Trail, which stretches 46 miles across Washington and Allegheny counties in Pennsylvania, saw a lot of bicycle traffic over Memorial Day weekend.

There’s nothing like catching one’s breath on a downhill, cool breeze after a lengthy uphill stretch of trail in direct sunlight.

On the Montour Trail, which stretches 46 miles across Washington and Allegheny counties, many residents have rediscovered bicycling in the fresh air, since fitness centers remain closed and “spin class” isn’t an option. The weather this past Memorial Day weekend was perfect for biking, and after being cooped up in the house for two months, people were itching to get outside.

David Poe, owner of The Tandem Connection, a bike shop that sits along the Montour Trail in Hendersonville, said they saw more traffic on the trail this Memorial Day weekend compared to previous years.

“The traffic definitely has been up on the trail with people being home,” he said. “We’re seeing a lot of new faces and people who have never been here before. Bike shops are busy in the spring anyway, but now, people are staying home and the only thing for them to do is get out and walk or bike.”

Along with their bicycle sales and repairs, the shop also rents bicycles to folks who want to experience the trail before making an investment. They are one day rentals, and once returned, each bike must be cleaned and sanitized.

“The traffic for the rental has spiked,” Poe said. “It’s nice to see people get out and discover the trail and see how beautiful it is. I think there will be a resurgence with biking in the next few years because people are rediscovering bicycling.”

The Tandem Connection also sells food, drinks, snacks and ice cream, a refreshing reward after a long ride. This aspect of the business did well in the past week, but according to Poe, “you’re not going to pay your mortgage selling ice cream.”

More people on the trail and riding bicycles, hasn’t necessarily meant more business or profit for the local bike shop – a main reason being there are no more entry-level bikes to sell. Countries and states where bikes are manufactured were in lockdown for months, meaning no bikes were being made or assembled, Poe said.

“When the pandemic started, I thought, well people are getting laid off, who’s going to buy a bike?” Poe said. “Within three or four weeks of being shut down and the weather started to get nice, that’s when you saw traffic pick up.”

The demand for bikes increased and the supply was quickly depleted, across the nation. Poe said he’s got bicycle parts on back order through August and has had customers cancel orders because they got tired of waiting.

“We are selling some bikes, but the bike industry is in a shortage,” he said. “It’s kind of a roller coaster ride – there’s been good news, but there’s been bad news, too.”

Poe can’t sell bikes he doesn’t have or can’t even order, and he’s not alone. Erik Jensen, manager of Bluestone Bike and Run in Harrisonburg, Va., said “most bike shops are completely out of bikes in the entry level price range.”

“A lot of the bikes come from places with lockdowns that weren’t able to assemble bikes with only 10 people in the building at once,” Jensen said. “It’s kind of been the perfect storm for bikes being hard to come by.”

Jensen’s store sold out of children’s bikes first, he said, followed by bikes costing $700 or less. They’ve also done well in service sales, working on bikes that hadn’t been ridden in years.

People are typically looking for used bicycles or less expensive new ones, typically less than $600, which aren’t the money-makers for shops like Poe’s. With races, trips and triathlons canceled this year, the “higher profit margin” bicycles and bike accessories are not doing as well in sales, Poe said.

“Now we’re concerned about how the rest of the summer looks,” he said. “We’re making the best of it.”

That’s what other shops plan to do as well – ride the “bike boom” as long as possible. Steve Sachetti, owner of The Bike Gallery in Lock Haven has stayed very busy since reopening May 1, selling and repairing bikes in a town near multiple state forests and bike trails.

“It’s been just crazy here the last month,” he said. “We’ve pretty much blown through our inventory and can’t even reorder because there’s nothing to reorder.”

Sachetti’s shop is located near the popular Pine Creek Rail Trail, and they also have multiple mountain biking trails in the area, he said.

“People are buying everything across the board, from kids bikes to road race bikes and everything in between,” he said. “It’s been a bike boom.”

He’s owned the shop for 29 years, but hasn’t seen this many customers, especially those new to cycling, in the last 15 years, he said.

“With everything shut down, there’s only so many things people can do,” Sachetti said.

He said it’s tough to tell right now, if these new bicyclists will stay interested once fitness centers open back up and things go back to a relative normal.

“If we retain half of the new customers we’re seeing now, that would be incredible,” Sachetti said.