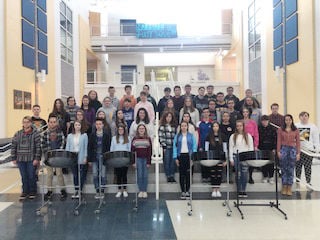 The sounds of the islands will be heard at Washington High School at 7 p.m. Thursday.

The Washington High School Steel Drum Band will perform, as well as the Canon-McMillan Pan and Drum Ensemble. There is no charge to attend the presentation.

The first Steel Drum Band Festival at Wash High will feel like one big family reunion.

Retired Steel Drum Band founder J. Marc Svaline will be in attendance as three of his former students, now music teachers themselves, are steel band conductors.

During that time, the marching band played at Disney World in 1974 and 1976, becoming the first high school band to march there. While in Disney World, Svaline saw a performance of a legendary steel band from Trinidad play at the “Pirates of the Caribbean” ride, and he said he became “hooked” on the sound.

Working with the school’s band parents group, Svaline began to look where they could purchase the instruments for a steel band. His steel band was recognized internationally as being one of the finest ensembles of its kind in the United States. They performed several years at national and state music education competitions throughout the late 1980s until 2004.

Washington’s Steel Band was the first steel band to be chosen to perform at the Mid-West International Band and Orchestra Clinic in 1992 and gave a clinic concert at the Percussive Arts Society International Convention in 1993. They represented the State of Pennsylvania at the 50th Anniversary Celebration of VE Day. The band was on tour for 10 days in May 1995, playing concerts in Paris, London, Normandy and Dover. The Steel Band has played an unprecedented eight times at the Chautauqua Institution.

While still teaching, Svaline joined with James Leyden to form Hillbridge Music, a publishing company created to provide quality steel band musical arrangements. It is now considered one of the top steel band publishers in the country.

Canon-McMillan has two Wash High alumni co-directing its band department. Mark Falvo a 1990 alumnus has been at Canon McMillan since 2003. Eric Schrader graduated from Washington in 1989 and had been with several other schools out of the area until returning to teach at Canon-McMillan in 2013.