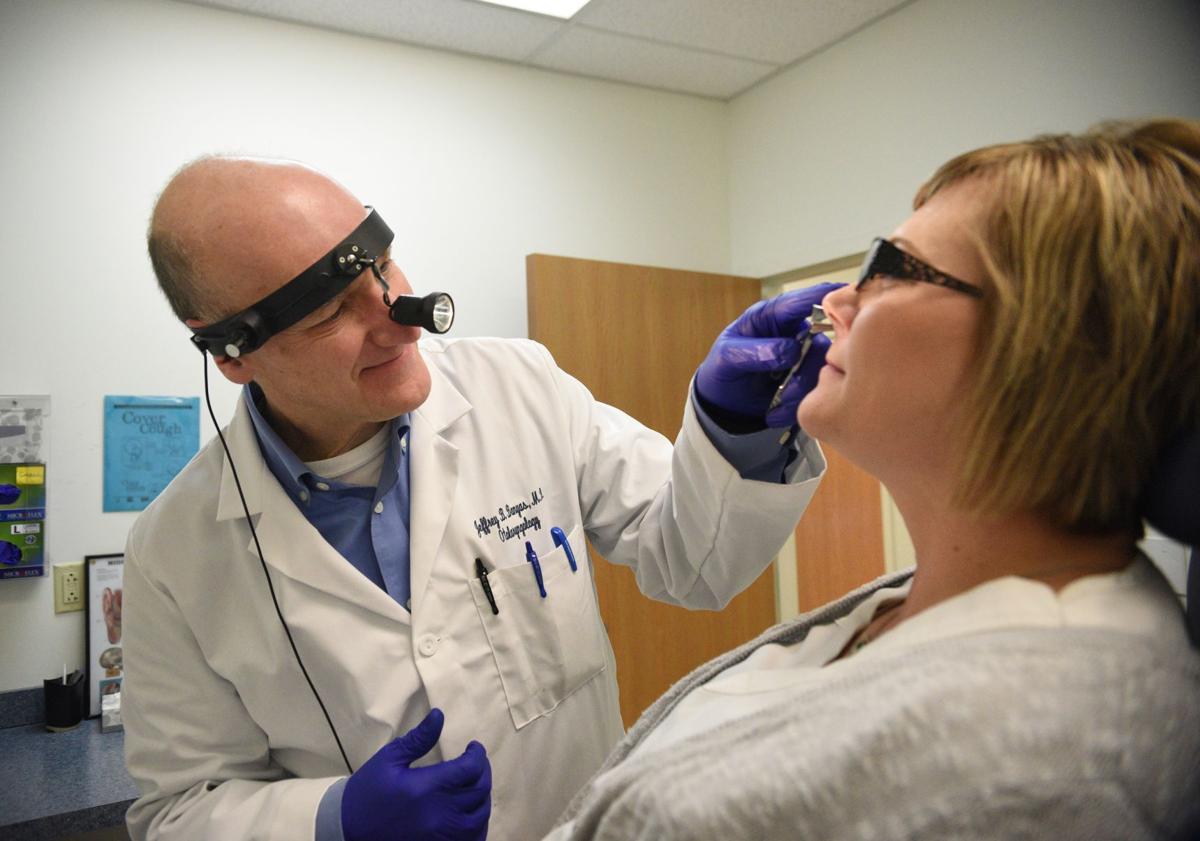 Dr. Jeffrey Banyas examines the nose of Debbie McMaster of Washington at his Washington office. 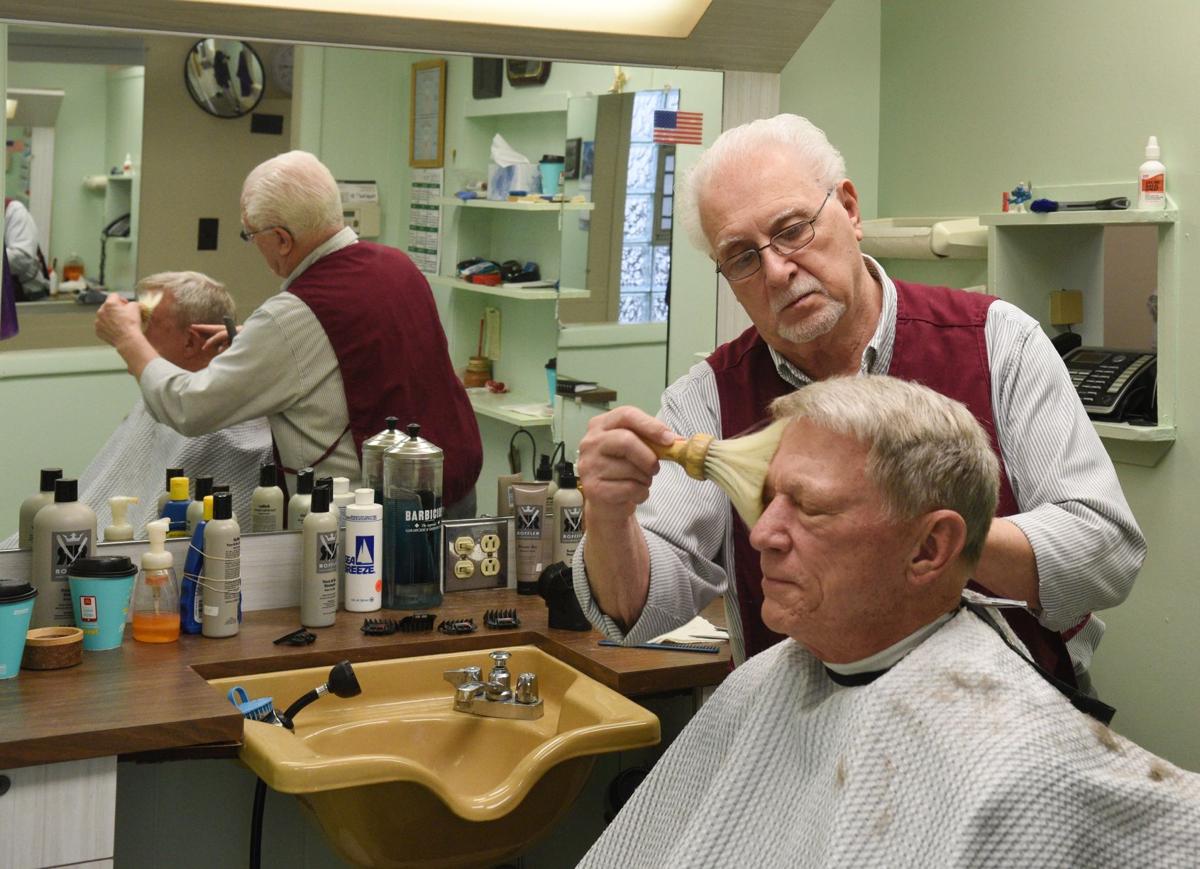 Sonny Spossey, who suffers from nosebleeds due to a dry nose, brushes off the hair from Tom Knight of Washington after he gives him a trim at his hair salon in Washington. 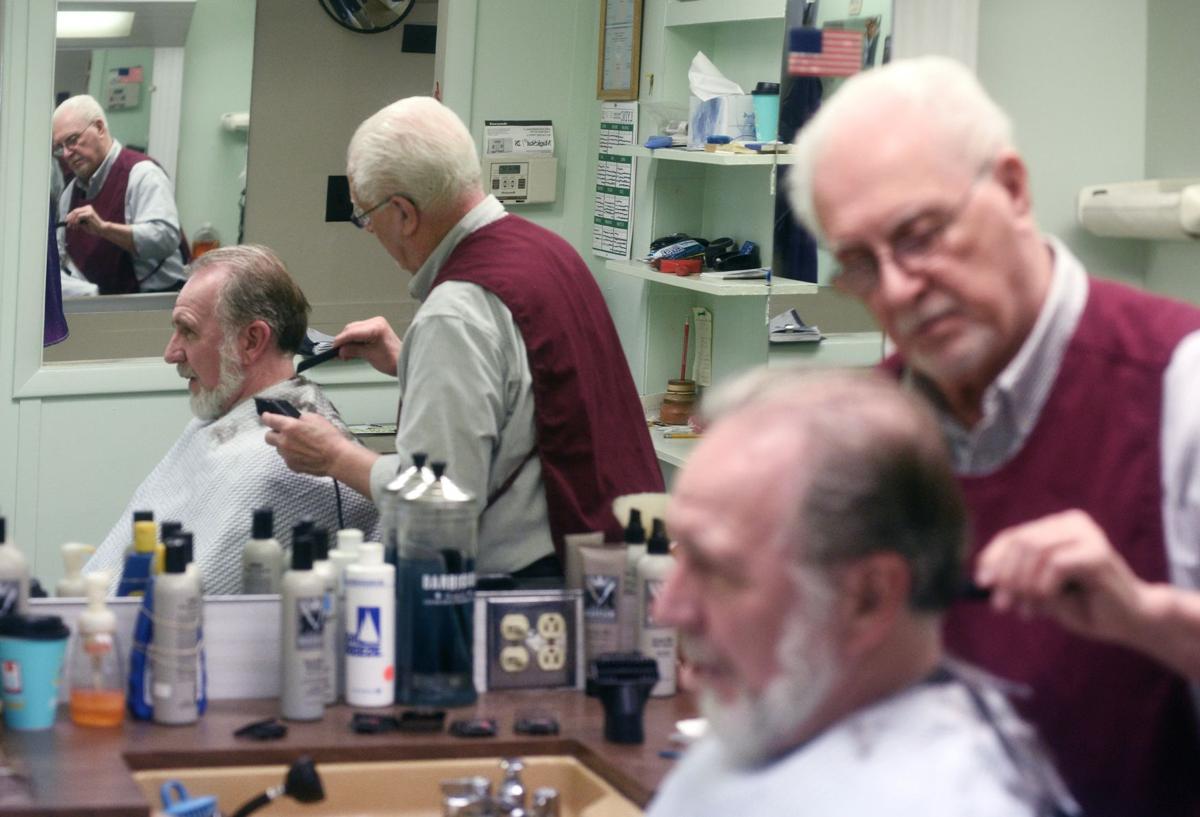 Sonny Spossey cuts the hair of Denny Malone of Washington at Spossey’s Hair Center in Washington. 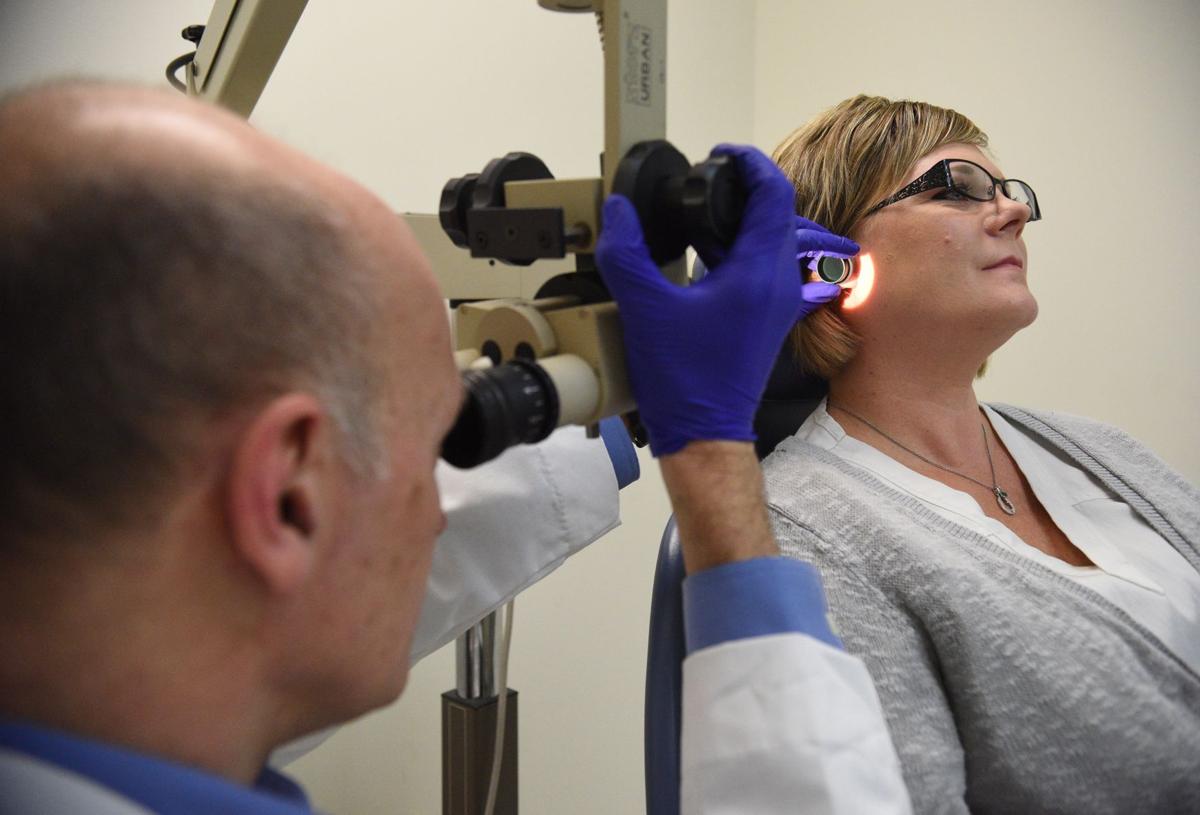 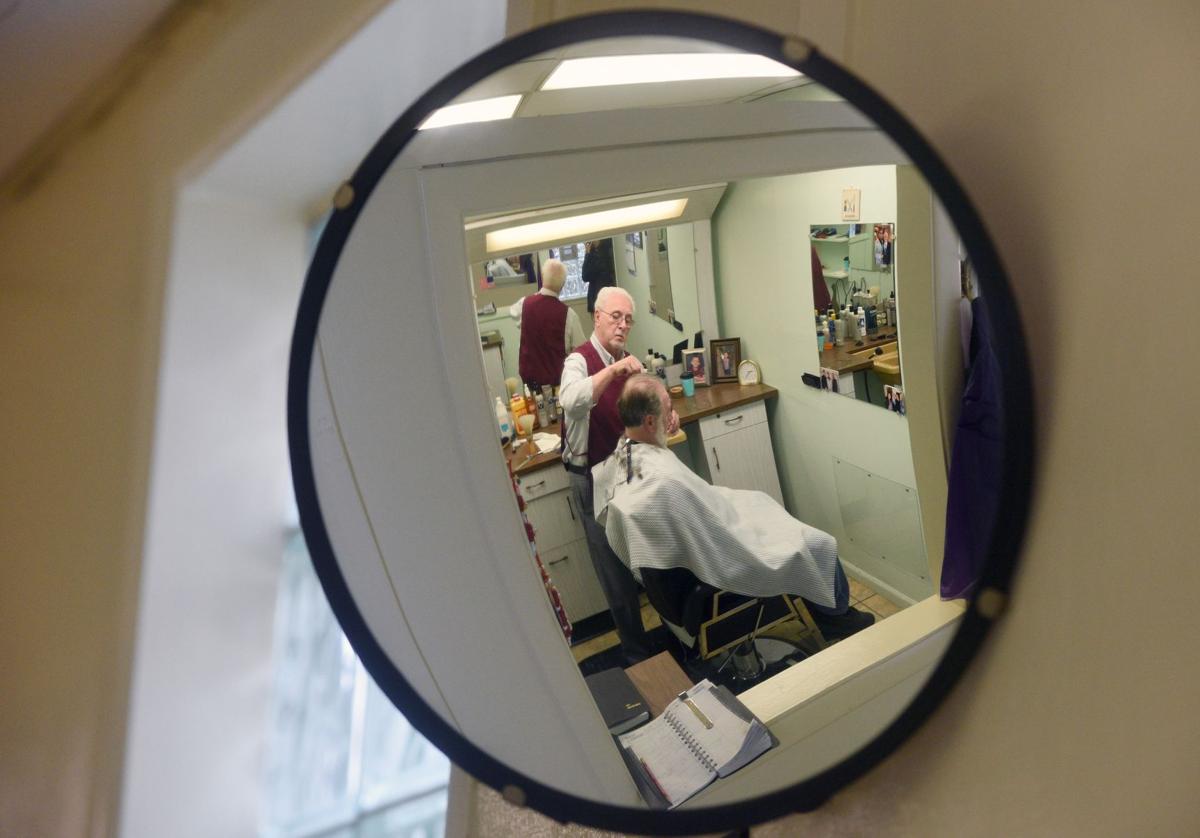 Sonny Spossey, who operates a hair salon, has long suffered from the effects of a dry nose, including nosebleeds, and has tried many remedies. 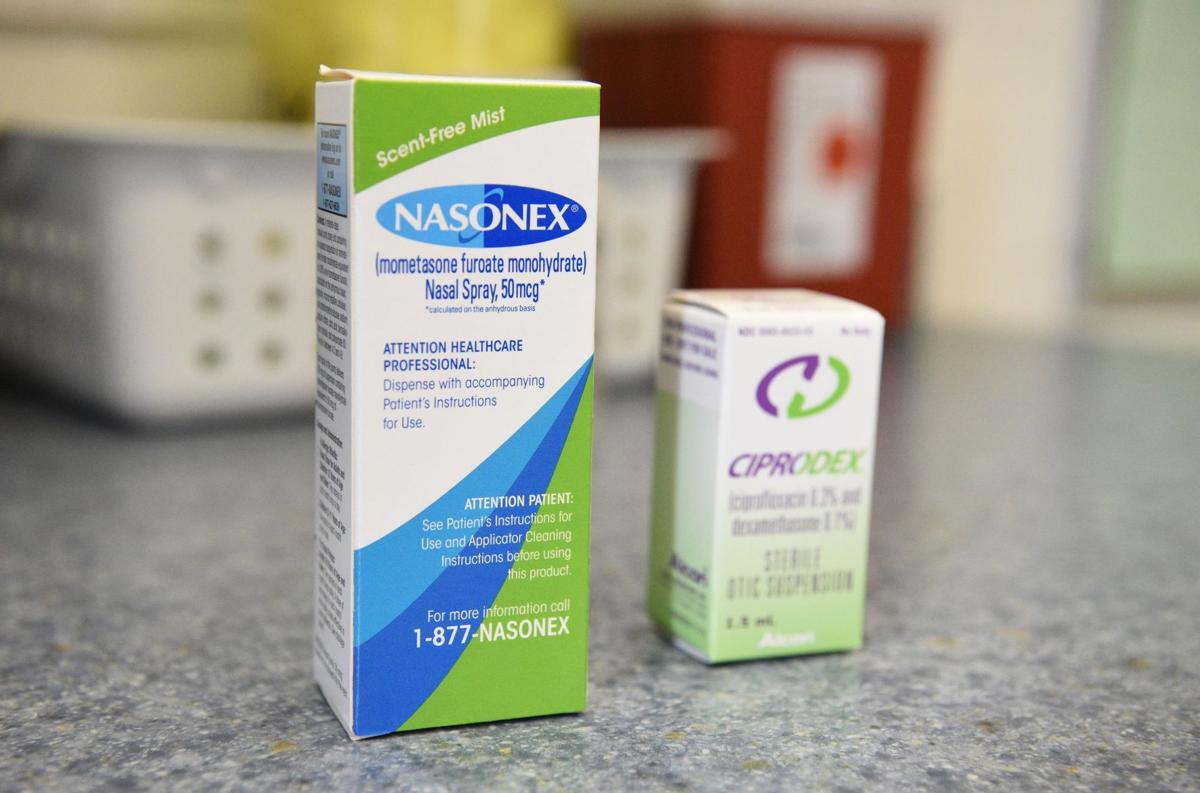 Dr. Jeffrey Banyas examines the nose of Debbie McMaster of Washington at his Washington office.

Sonny Spossey, who suffers from nosebleeds due to a dry nose, brushes off the hair from Tom Knight of Washington after he gives him a trim at his hair salon in Washington.

Sonny Spossey cuts the hair of Denny Malone of Washington at Spossey’s Hair Center in Washington.

Sonny Spossey, who operates a hair salon, has long suffered from the effects of a dry nose, including nosebleeds, and has tried many remedies.

It’s a rite of winter: When temperatures drop, we flip on the furnaces and fireplaces. They heat our homes but also cause dry indoor air that can lead to dehydrated, itchy skin, static electricity, dry noses and even nosebleeds.

These conditions are not only uncomfortable, they can be unhealthy since our noses act as barriers to bacteria and viruses. We’ve always been told that healthy dogs should have a wet nose, but did you know that humans also benefit from having moist noses?

Our noses are actually built to fend off germs trying to invade our bodies. Ear, nose and throat surgeon Dr. Jeffrey Banyas has practices in Washington and McMurray and says keeping your nose moist is definitely a plus for preventing sickness.

“The nose and sinuses are lined with a mucous membrane that has within it small hairs called cilia,” Banyas explained. “These cilia beat rhythmically to sweep the sinuses clean.” Banyas said when the mucus is thin, the cilia work much more efficiently. However, dryness throws a wrench into the works.

“When the membranes dry out, not only do the cilia not work as well, but any trapped infectious mucus, pus, or debris is thicker and harder for the cilia to remove,” he said. It’s a pretty well-oiled machine when it functions properly, but some conditions cause the cilia to stop working. Medications, cigarette smoke, cold temperatures and excess dryness all inhibit how well cilia can function. When they don’t do their job, we wind up with nasal crusting and sinus infections.

Washington resident L. Anthony “Sonny” Spossey knows the discomfort a dry nose can cause. He’s suffered from dry nasal passages most of his life.

“You get that stuffiness and the dryness so you just keep doing different things to make sure something works,” said Spossey, owner of Spossey’s Hair Center. “It seems like in the morning especially when I get up I get blood out of my nose,” Spossey lamented. “I’ve had some pretty serious nosebleeds and ended up going to the hospital. The last time it was cauterized, and I haven’t had that problem for a while.”

Though he hasn’t suffered recent nosebleeds, he still experiences dry nasal passages and the stuffiness and congestion they can bring and has tried every possible solution from nasal saline irrigation to humidifiers.

“The Neti pot is too intrusive,” he said. “I just didn’t like fooling with that all of the time the way you have to make it work, pouring it up one side of your nostril and tilt over so it comes out the other side. I have a humidifier on the furnace set on a certain percentage of moisture it’s supposed to put in the air. Then I have a humidifier in my room.”

Banyas says keeping the humidity level in your house in a proper range is one key to a moist nose in winter months. “Around 40 percent is ideal for nasal and sinus health,” recommended Banyas. “Too dry, and mucociliary clearance (the mechanism by which one’s sinuses clear themselves) begins to fail. Too moist, and one risks increased exposure to dust mites and mold.”

If you don’t have a whole-house humidifier installed with your furnace, you can try a vaporizer or humidifier for your bedroom. These small appliances raise humidity by spraying a cool mist or by boiling water and releasing the steam through a vent or a hole at the top. Be sure to clean humidifiers on a regular basis as the moist environment can promote the growth of mold and bacteria inside the machine.

Besides using humidifiers, doctors also recommend you try to stay hydrated by increasing your water and liquid intake to promote increased mucus production. Using nasal saline sprays and gels can also help keep your nasal passages moist. Banyas recommends them to his patients and says they are safe.

One remedy Spossey has found success with is a nasal saline gel. There are many over-the-counter brands available, and Spossey said the Ayr brand gel containing aloe has helped him immensely.

“I think the nasal gel has made me more comfortable,” said Spossey. “When I wake up in the morning, I don’t feel like I have that crusty feeling in my nose.”

As for nasal irrigation systems (such as the Neti pot), Banyas said the chief risk in using them is contaminated water. “Rare infections have been reported from doing so,” he said. “I have also seen a few patients who have had some of the saline from the Neti pot get into the ears through the Eustachian tube, though this is also quite rare.”

He also added some of his patients have found relief from dry and crusty nasal passages by rinsing their nostrils using a bulb syringe and saline solution. Some doctors caution against using petroleum jelly or other lotion moisturizers inside the nose, citing studies that show those substances can drain into the lungs.

Banyas also warns against using decongestant sprays too frequently. “The chief danger in nasal decongestant sprays is that your nose rapidly develops tolerance to them, requiring ever greater quantities to accomplish the same result,” said Banyas. “They also can raise your blood pressure and heart rate and actually decrease function of the cilia by weakening their blood supply.”

With a little effort, you can keep your nose moist and working hard to fight off germs this winter. However, Banyas also cites another interesting factor when it comes to how our noses fight off invaders, and it has nothing to do with dehydration or cold weather.

“I have read a few papers that suggest that exposure to electromagnetic fields can interfere with ciliary function, particularly those frequencies associated with cellphones,” he said. “These studies were preliminary, though, and the full effects are not yet fully known.”