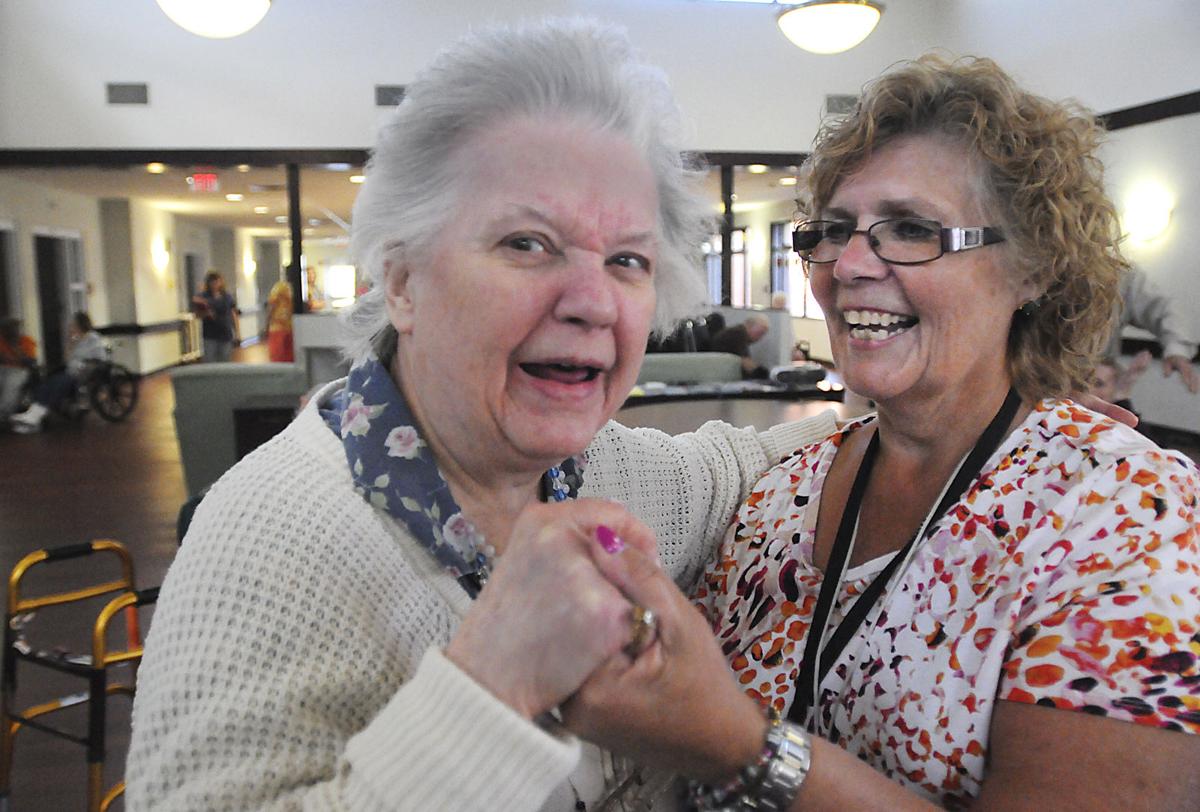 In this photo, from the 2014 O-R series on Alzheimer’s disease, “No Longer Me,” Catherine Oberman, left, dances with Marsha Dykins, an activity aide at Washington County Health Center. 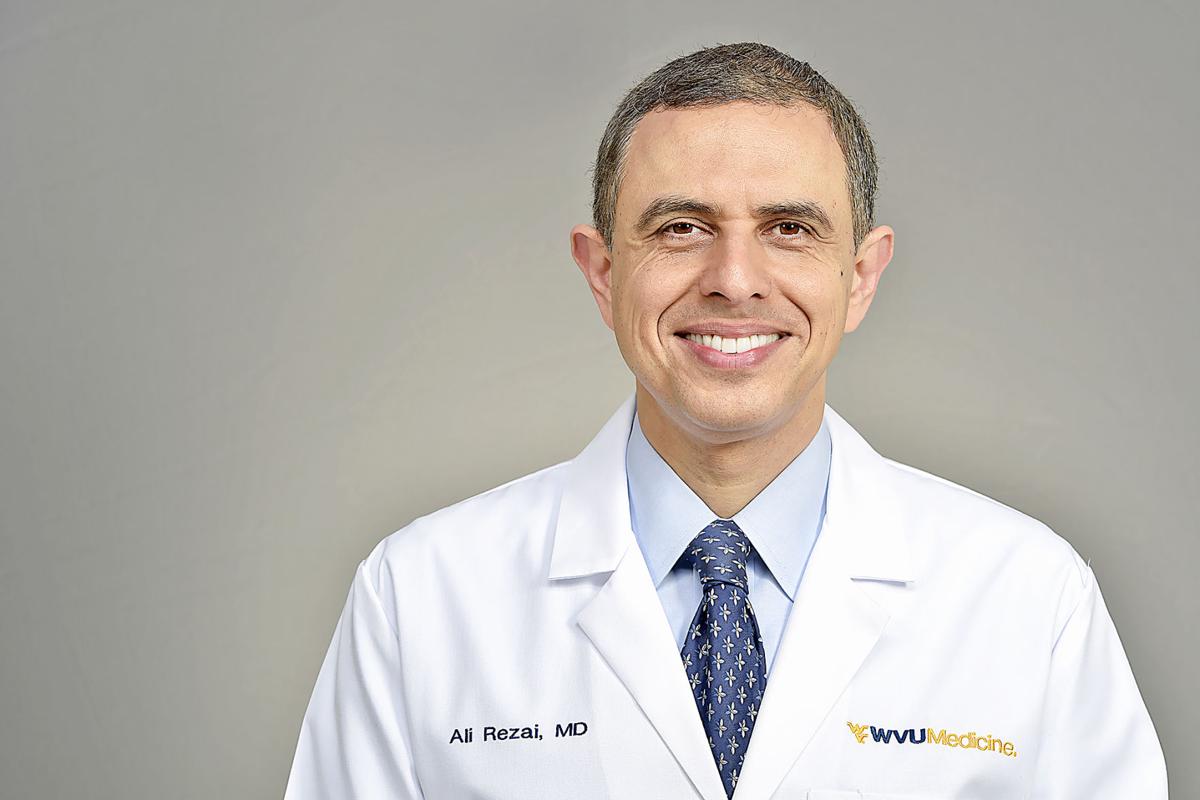 A groundbreaking medical study at West Virginia University (WVU) in Morgantown has researchers hopeful that a treatment for Alzheimer’s disease may finally be on the horizon.

WVU has been chosen as the first site in the world for a study on whether ultrasound waves can help reverse the effects of the debilitating disease, and allow doctors access to parts of the brain affected by it.

“Our trial has three objectives,” said Dr. Ali Rezai, director of the WVU Rockefeller Neuroscience Institute. “One, to continue to evaluate safety, number two, to see if there’s any improvements in cognitive function and reduction in cognitive decline that’s the hallmark of this disease, and number three, if it can reduce these debilitating plaques in the brain.”

The study will focus on patients who have symptoms of early Alzheimer’s disease and who have plaques showing up on brain imaging. Rezai described the plaques as, “clumps of sticky proteins in the brain that slow down transmission of nerve impulses and signals in the brain and cause so much of the problems associated with this disorder.”

The thought of using ultrasound waves to treat brain disorders has been around for a while. Rezai led research at Ohio State University using the same focused ultrasound technology to treat tremors.

Phase one of this study took place at the University of Toronto, where doctors tested whether the ultrasound waves could safely open what’s called the blood-brain barrier (BBB) – basically a shield that protects the brain from harmful substances, germs and other chemicals while allowing nutrients to enter.

“At the same time, it prevents larger molecules like chemotherapy or medications or antibodies or stem cells and other treatment modalities to get access into the brain from the bloodstream,” said Rezai. “And this has been a major impediment in science until this new innovation has come about with focused ultrasound that sends beams to very specific parts of the brain that we select and opens the BBB within minutes.”

Until now, breaching the BBB proved to be too dangerous. The first study showed focused ultrasound waves can safely open the BBB temporarily and then allow it to close again.

“That’s why we’re very excited because we think this is a potential game-changer in the treatment for Alzheimer’s,” said Rezai. “Imagine if you can have a reduction of plaques over time if this study is successful. But also in the future, to be able to deliver targeted antibodies or chemotherapy or stem cells into every part of the brain that needs it. Up until now, we couldn’t do that.”

Research in animals has shown that even opening the BBB has helped to remove some of the associated plaques, and improved behavior without any additional medicine or treatment.

Rezai said the goal is, “to open the BBB to allow access for the body’s immune system to be interacting more with each other with the hope of reducing the plaques.” Then there’s the possibility of being able to introduce medications into affected areas of the brain that were previously blocked by the BBB.

“Some think about this being a dialysis system for the brain that clears out the plaques,” said Rezai. “First, to open the BBB in the part of the brain that is involved in thinking and behavior – that’s the temporal lobe and the hippocampus. Essentially, here are areas involved in cognitive function. The advantage is that this treatment does not involve cutting the skin or any type of surgery. The ultrasound waves are administered by wearing a helmet while you lie in an MRI machine. The helmet has 1,000 ultrasound probes in it,” said Rezai. “Beams go to within a millimeter of where we aim it.”

WVU has recruited top researchers and Alzheimer’s experts to the Rockefeller Neuroscience Institute, which is why it was chosen by INSIGHTEC, an Israel-based medical technology company which produces the ultrasound system, to conduct the study. The FDA-approved trial will evaluate whether focused ultrasound reduces the plaques in the brain and also the associated cognitive decline that is a hallmark of Alzheimer’s disease.

While Rezai and his fellow researchers are cautiously optimistic, they realize this is still just the research phase.

“This is a trial, it may not work,” said Rezai. “That’s why it’s research. But we are very optimistic about it based on previous studies.”

There are currently 5.4 million Americans with Alzheimer’s disease and there are no effective treatments. Rezai believes this technology finally holds some promise in treating patients for a disease that – until now – they had no hope of beating.

“We’re hopeful based on the previous animal studies and what we know of the science, and I’m hopeful that this study will provide us with further key insights so that we can help find better ways to treat Alzheimer’s patients,” he said. “It’s really about having hope and pushing the boundaries of research frontiers. We are thrilled that in West Virginia and the region we can be among the first in the world to have a new innovation that can help hopefully treat one of the most dreaded of all diseases.”

The clinical trial is open to residents across the region and is expected to start at the end of October. For eligibility requirements and enrollment information, call 304-293-5150 or email WVURNI@hsc.wvu.edu.