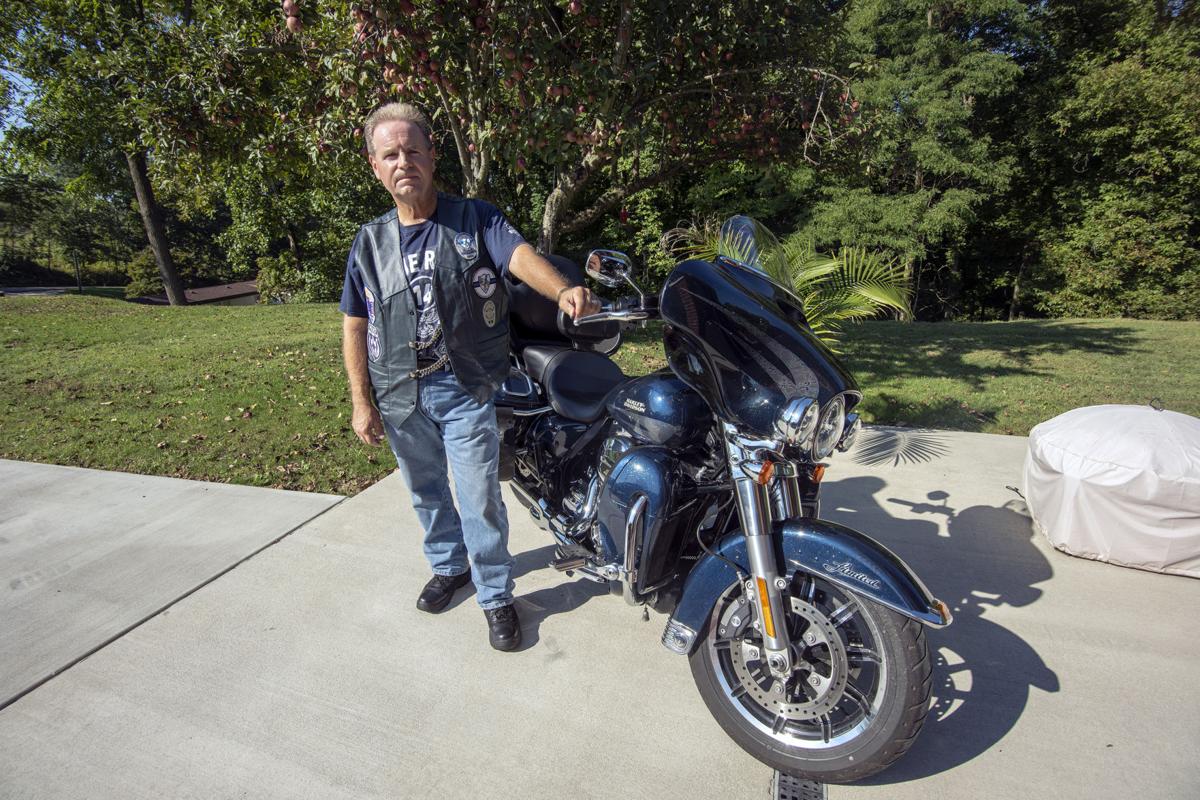 Dave Richards with his motorcycle 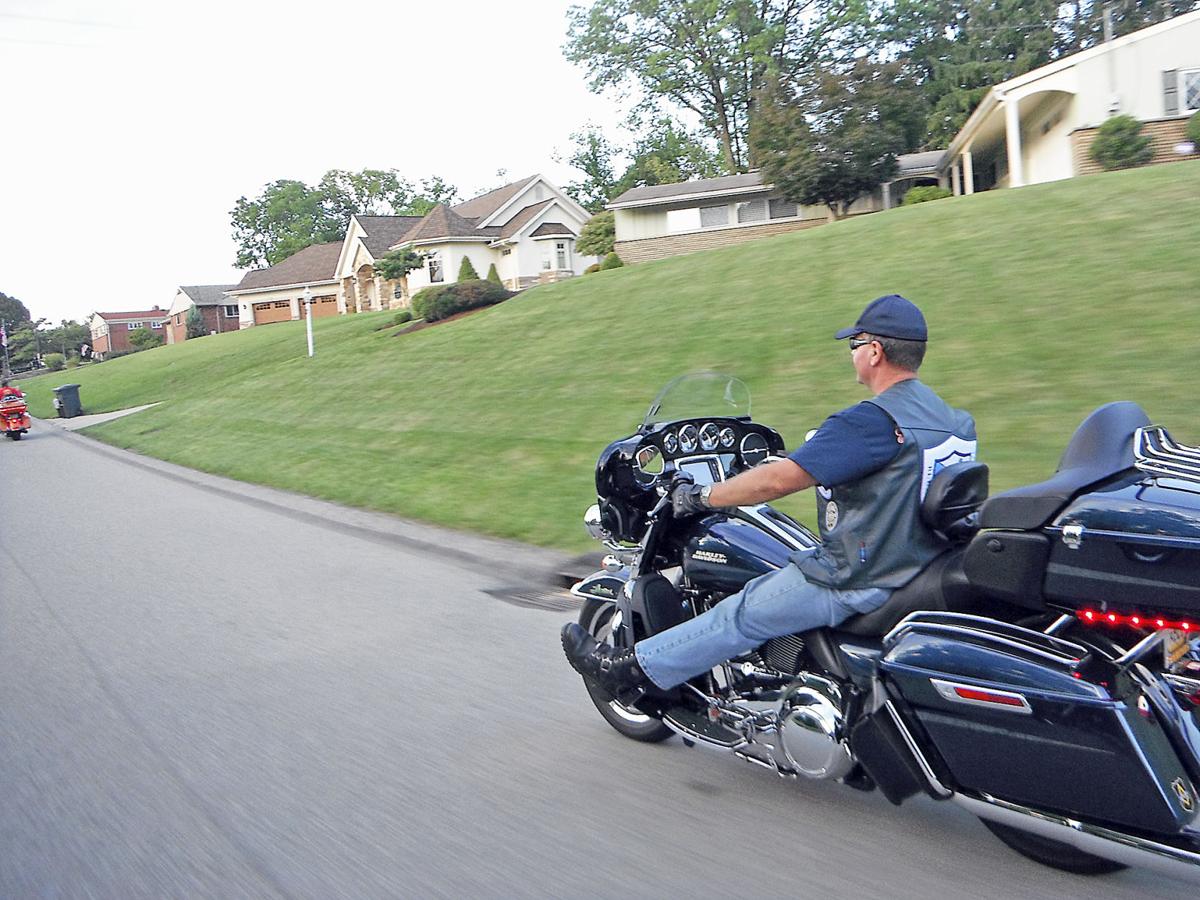 Motorcycle enthusiast Dave Richards has been organizing the Blue Ride charity event since 2004. 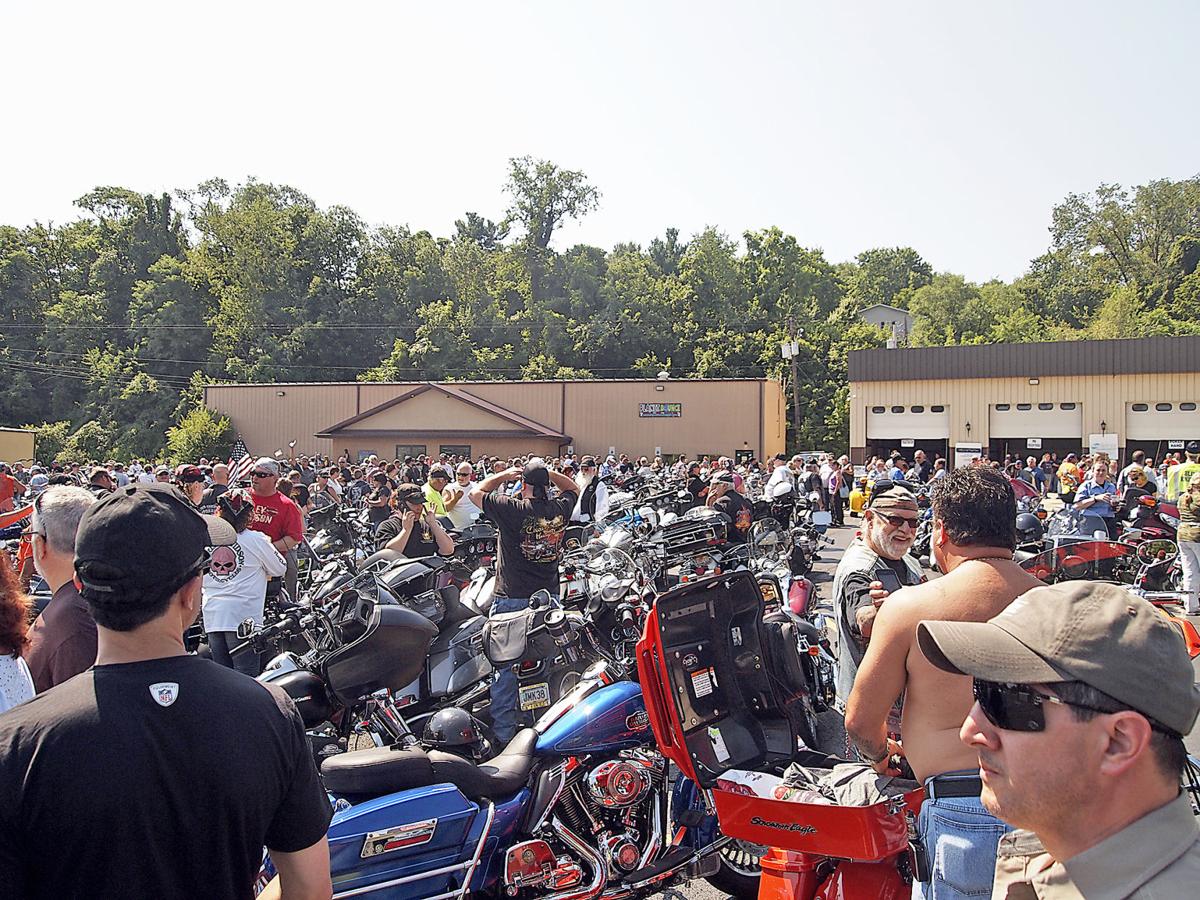 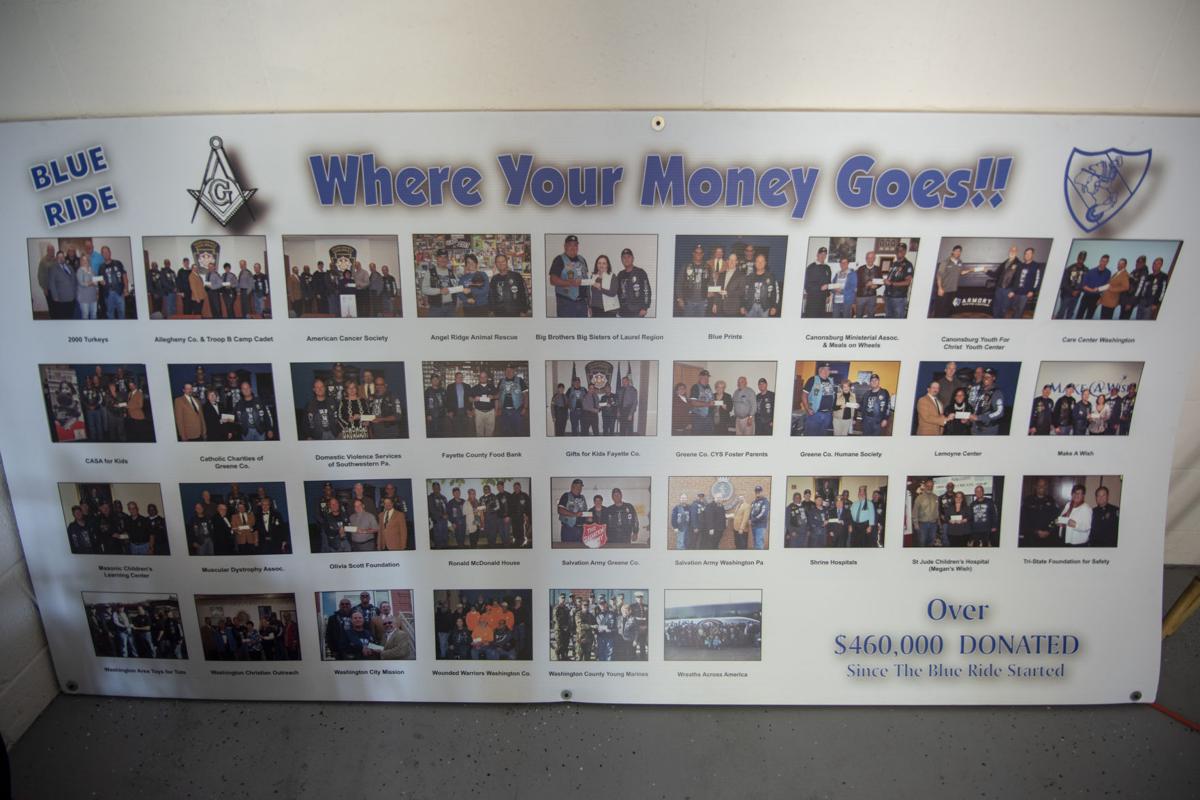 A sign from a previous Blue Ride event sits in Dave Richards’ garage. 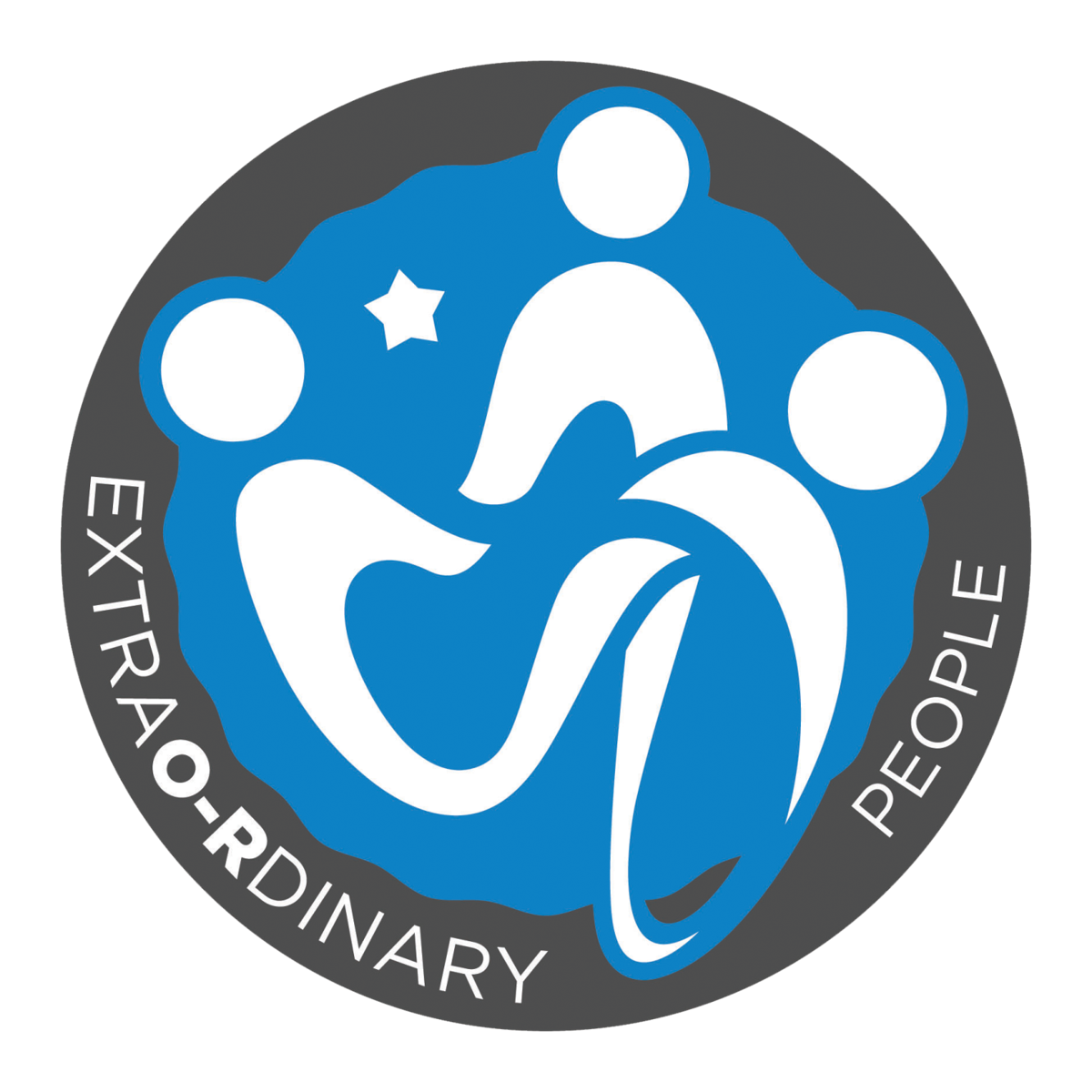 Dave Richards with his motorcycle

Back in the 1950s or 1960s, the conventional wisdom had it that when you saw a flock of motorcyclists coming your way, it was time to lock up the town and close the curtains tight.

Think of movies like “The Wild One” or “The Wild Angels,” or books like Hunter S. Thompson’s “Hell’s Angels.”

Times have, of course, changed. A half-century later, if you see a throng of motorcyclists in your rear view mirror, they may not be looking to stir mayhem but to raise money for worthy causes.

That’s the case with the Blue Ride, the annual charity ride that takes place the last Sunday of July in Washington County. Its organizer is Dave Richards, a sergeant in the North Strabane Police Department, and he is this month’s ExtraORdinary Person.

The first Blue Ride happened in 2004 when Richards and some other local law-enforcement officials decided to undertake a ride for charity. The ride was put together under the auspices of the Blue Knights, the international organization of law-enforcement officers who are also motorcycle enthusiasts, and the Washington Lodge No. 164 of the Free and Accepted Masons. For the first ride, about 185 cyclists showed up, and they raised between $7,000 and $8,000.

“Then things got really big and it became a huge event,” Richards recalled.

Fourteen years later, the Blue Ride has raised about $500,000 all told, with more than 30 local and regional charities reaping rewards from the hundreds of motorcyclists who participate every year. Charities in Washington and Greene counties that benefit include Community Action Southwest, the Greene County Humane Society, the LeMoyne Center in Washington, Washington City Mission and the Meals on Wheels program that operates out of Chartiers Hill United Presbyterian Church.

“The biggest thrill I have out of the whole thing is when we start to give the money away,” Richards explained one morning last month. “A lot of these groups depend on this program. I’m just glad when we’re able to help.”

In 2014, Richards was given the Louis W. Waller Humanitarian Award by the Washington County Community Foundation, and Betsie Trew, foundation’s president and CEO, said Richards’ work on the Blue Ride has been invaluable.

“The Blue Ride has provided hundreds of thousands of dollars of critical financial support to local charities,” she said. “Sustaining the type of fundraising activity takes extraordinary leadership, and Dave has provided that leadership for over a decade.”

Richards, 59, has been part of North Strabane’s police force since 1992. He has also worked in McDonald’s police department and the Washington County sheriff’s office. A native of the Scenery Hill area, he is a graduate of Bentworth High School. He is a longtime motorcycle enthusiast, and has traveled out to the massive Sturgis Motorcycle Rally in South Dakota, which is held during the first full week of August every year.

What does he enjoy about being on a motorcycle?

“Riding to me is my relaxation,” he said. “It gives me a chance to get out there and relax a little bit and forget about the world.”

The next Blue Ride is scheduled for Sunday, July 28, 2019, with registration happening at the North Strabane Township Volunteer Fire Department on Route 19 from 9 a.m. to 11 p.m., with departure set for 11:30 a.m. For information go online to www.pa16-blueknights.com.

As part of the ExtraORdinary People Award, Dave Richards has been awarded $500 to give to charity of his choice, underwritten by the Observer-Reporter and Range Resources. Richards has chosen Wreaths Across America, the group that honors U.S. veterans by coordinating wreath-laying ceremonies at cemeteries around the country each December. In Washington County, wreaths will be placed on the graves of veterans at the National Cemetery of the Alleghenies in Cecil Township on Dec. 15.