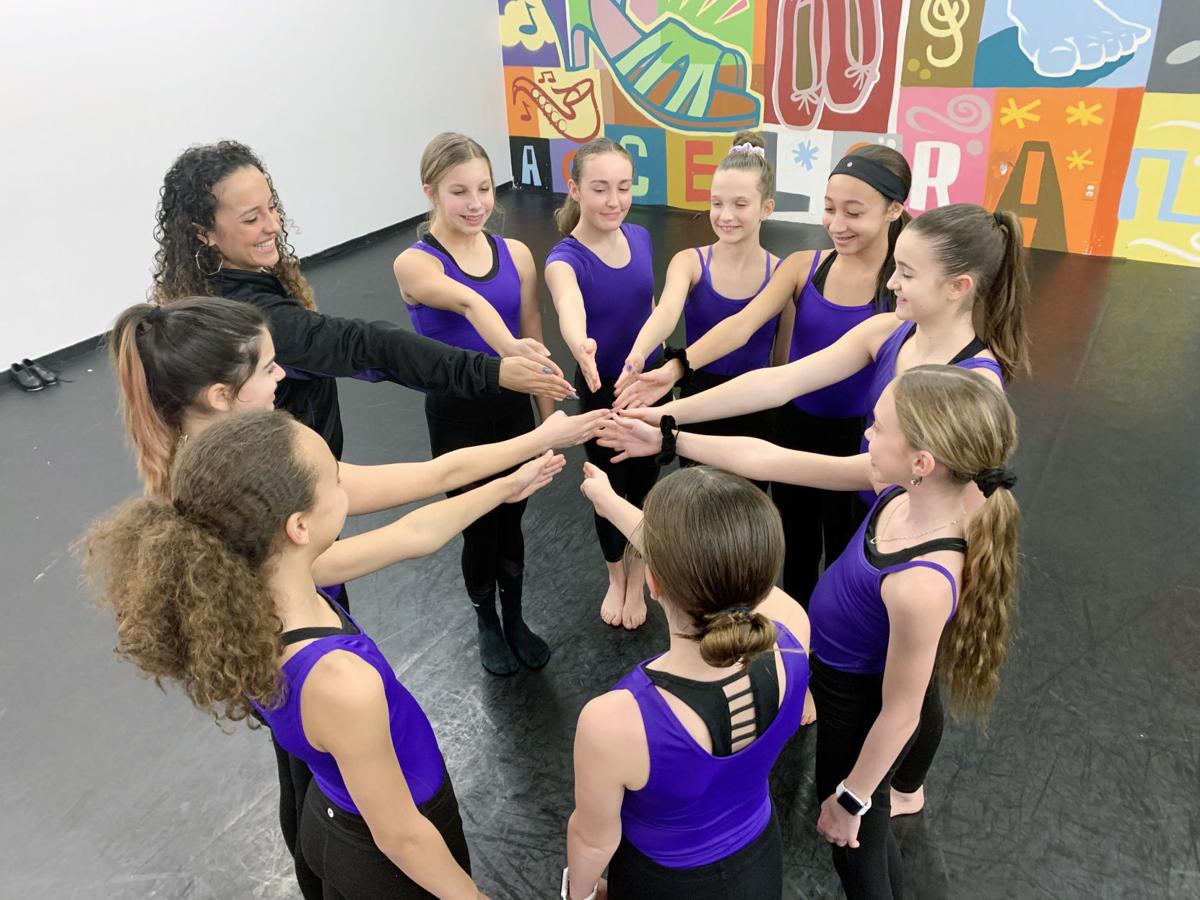 Rosalynn Miller with students in her junior jazz class 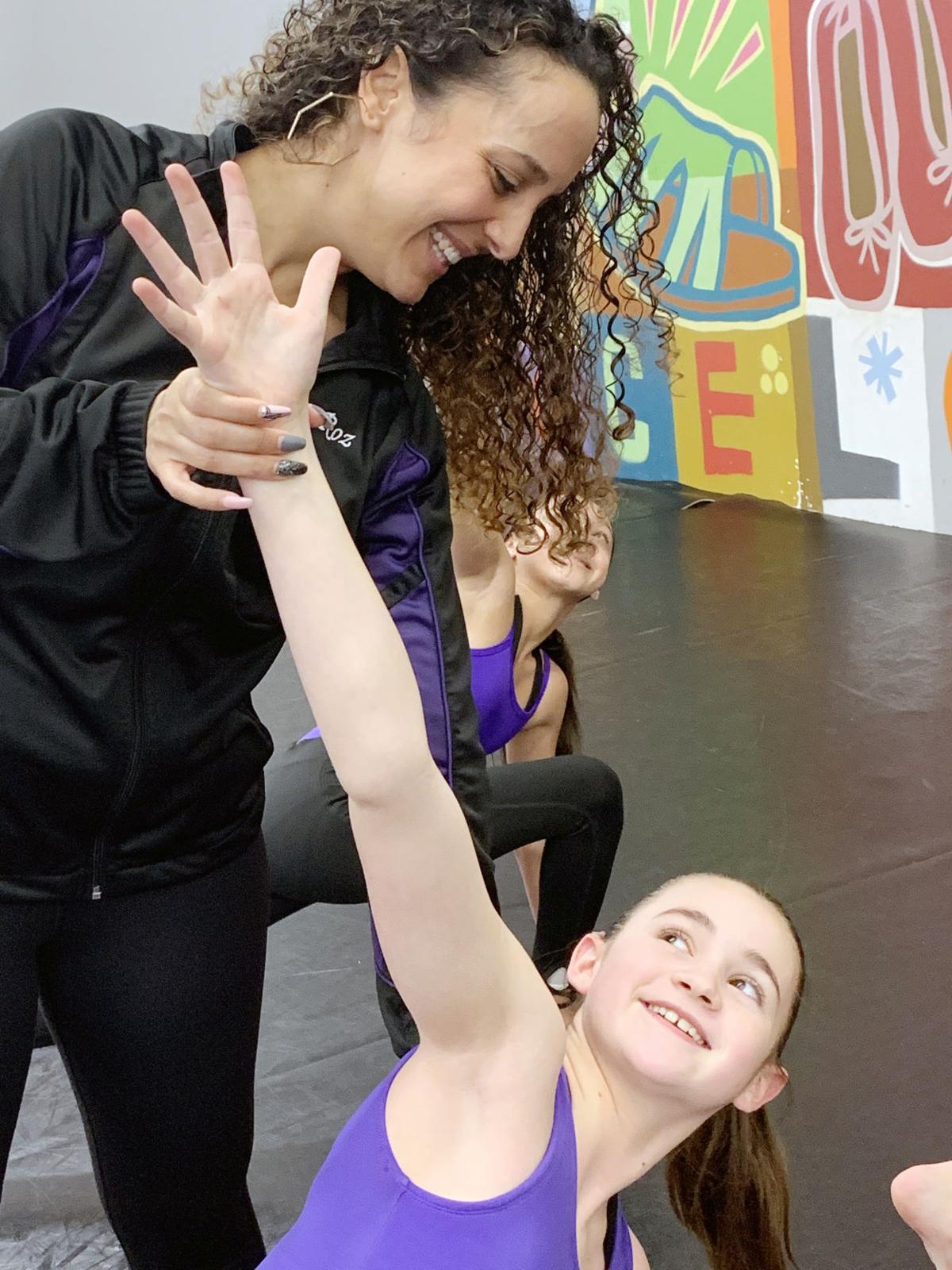 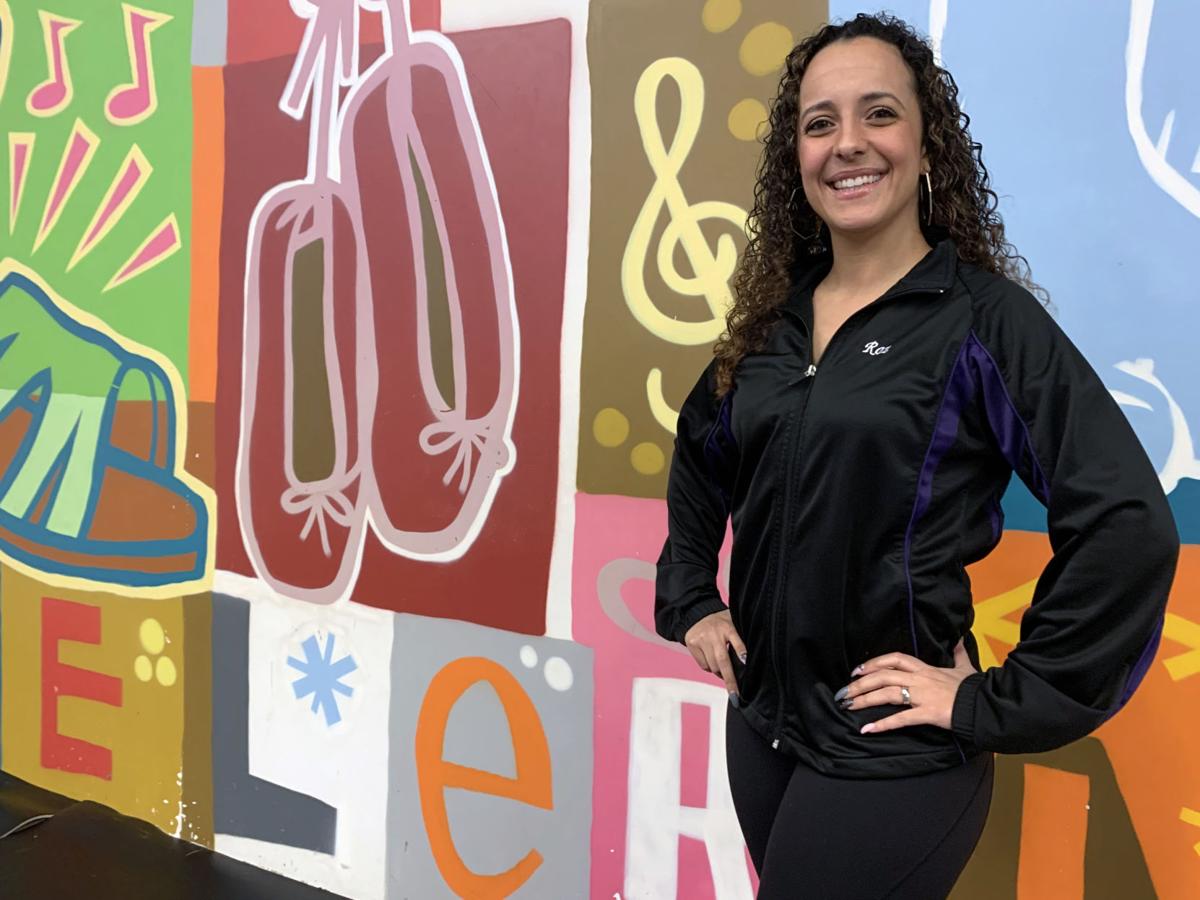 Rosalynn Miller’s goal is to provide an environment where kids feel safe and accepted, and free to express themselves through the arts. 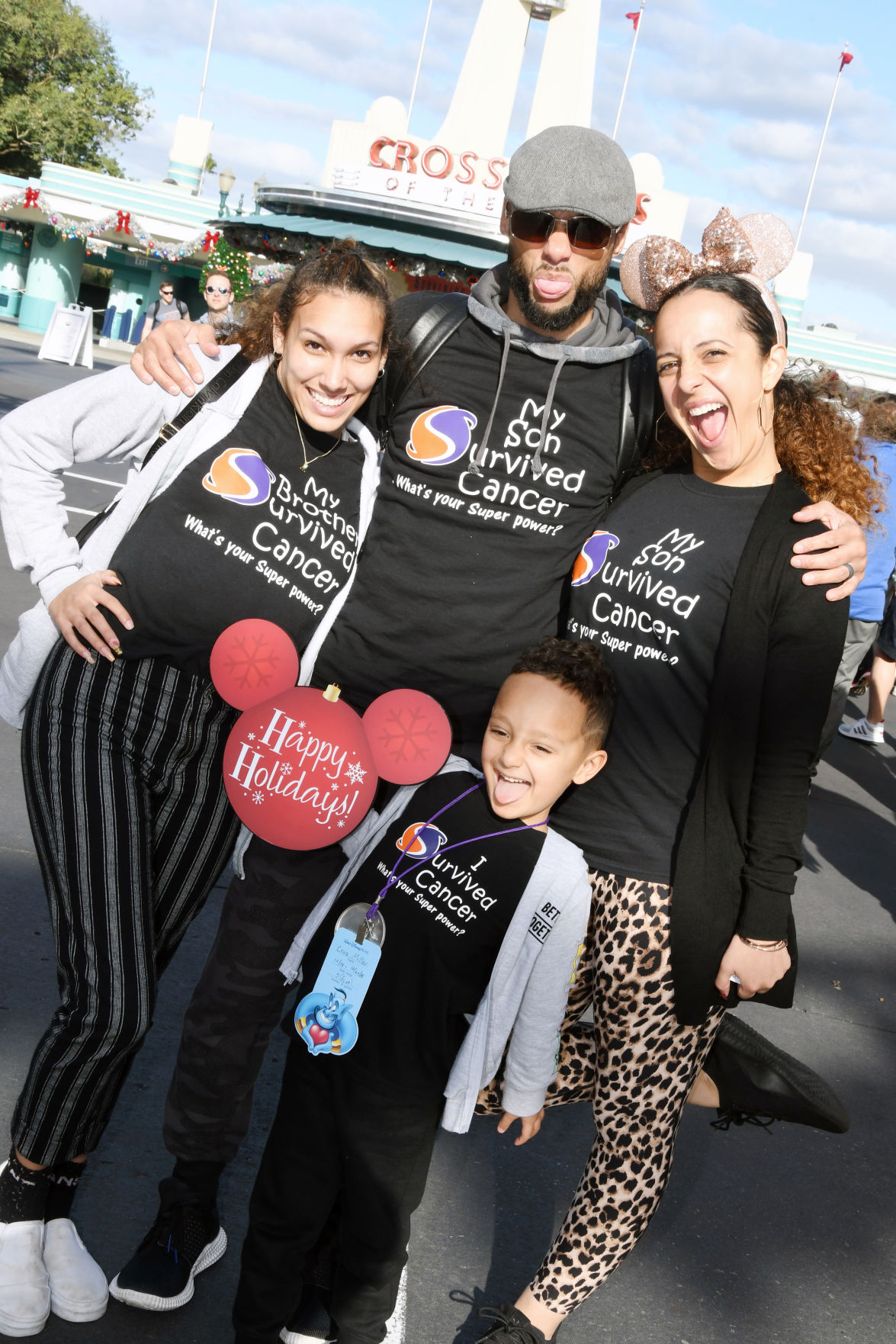 Rosalynn Miller, right, with her daughter Mylia Miller, husband Danny Miller, and son Cruz Miller at Disney World during their Make-A-Wish trip given to Cruz, who completed treatment for leukemia in May.

Rosalynn Miller with students in her junior jazz class

Rosalynn Miller’s goal is to provide an environment where kids feel safe and accepted, and free to express themselves through the arts.

Rosalynn Miller, right, with her daughter Mylia Miller, husband Danny Miller, and son Cruz Miller at Disney World during their Make-A-Wish trip given to Cruz, who completed treatment for leukemia in May.

From the time she was in second grade, Rosalynn “Roz” Miller dreamed of becoming a professional dancer.

But when she was in high school, Miller’s guidance counselor told her she should consider being a social worker. Dancing, she said, wasn’t a sensible career path.

A distraught Miller went home from school and told Grandma Becky Dunn – a family friend who, along with Becky’s mother, Jean Baker, raised Miller – about the meeting.

“She said, ‘You go back to school tomorrow and you tell her that you talked with me and we decided you are going to pursue this, and there is no backup plan. You are going to do dance,’” recalled Miller. “And I remember feeling, ‘Oh! Someone’s on my side. Someone believes I can do this.”

Miller, 34, of Bridgeville, graduated from Point Park University with a degree in dance with a dual concentration in jazz and pedagogy.

Miller’s mission, though, isn’t to produce great dancers, which she does.

It’s to provide an environment where kids feel safe and accepted, and free to express themselves through the arts.

“We accept all students who walk through our doors, and we love on everybody here,” said Miller. “Boys and girls do not have to be the best dancers to be a part of our family. If you want to be a great dancer, we’ll make you a great dancer. But if you just want to be a cool human being and dance, too, you’re in the right place.”

Miller’s unwavering and enthusiastic love for her dancers, and her commitment to give back to the community, have made her beloved by the studio’s students and their families.

“From the minute we walked through the door, the Synergy family culture that Roz has created embraced us with open arms,” said Hayley Martin, whose daughter, Arabella, 11, is a student at the studio. “She teaches so much more than dancing. Her students are a product of the amazing leadership she shows them.”

For her commitment to Synergy students and the community, Miller has been selected as the Observer-Reporter’s ExtraOrdinary Person for January. The award is underwritten by the newspaper and Washington Auto Mall, which will donate $500 to a charity of Miller’s choice. Miller selected Invisible Blind Sports.

Each season, Synergy donates to a nonprofit organization – among them, the American Cancer Society and Alex’s Lemonade Stand. The students have sent Christmas stockings to soldiers, participated in autism awareness events, and Relay for Life.

In 2020, Synergy is both looking forward and celebrating the past with a recital called Reflections (since 20/20 represents perfect vision), and the annual fundraiser will benefit Invisible Blind Sports.

The brother of two Synergy dancers is blind, which led Miller to settle on the nonprofit.

Cancer, though, has been Miller’s biggest nemesis.

In 2010, while Miller was teaching hip hop at a Pittsburgh charter school, she received a phone call that Grandma Becky had been diagnosed with stage 4 cancer and had weeks to live.

Miller took a leave from work and returned home to Middletown, near Hershey, to care for Becky in her last days.

Becky and Jean, who died when Miller was a sophomore in high school, took in Miller, whose parents had her when they were teenagers. Miller’s father, who was born and raised in the Bronx, spent time with Becky and Jean during the summers as part of a program to get inner city kids out of the city.

“When they got pregnant, Jean and Betty said they’d raise me. They took me in, and they loved me,” said Miller.

When Becky died, “It was a heavy blow,” Miller said. “It was an awakening for me. I told my husband, ‘I think I’m ready to live life a little bit harder, do the things I want to do.’”

She sought advice from Joyce Ellis, director of LeMoyne Community Center, who was closing the dance studio she operated for decades in order to focus on the center.

Ellis encouraged her to start the studio.

“I was young, I had no money and no place; I was working my butt off at a lot of part-time jobs trying to make ends meet, but I did it,” said Miller.

She set about building an atmosphere where kids felt like Grandma Becky and Jean made her feel.

“When we did Synergy, it was important that I honor (Becky and Jean) for that, and that kids who walk through that door have the feeling that someone is on their side,” said Miller. “I’ll support you. Everyone in the world can tell you you can’t. Come talk to me and I’ll tell you you can. I think we need more people like that.”

The company has grown from 30 students to more than 200, and Miller employs more than a dozen instructors. She was honored as Teacher of the Year at a recent Myrtle Beach National Dance Competition, and she and her teams have won numerous awards.

Synergy is a founding member of More Than Just Great Dancing, a nationwide organization that is rooted in charitable giving and the idea that “We don’t teach kids to make great dancers, we teach dance to make great kids.”

Miller said her goal is to touch as many lives as she can, an approach to life she learned from her grandmothers.

“When you get loved on, I hope it inspires you to go forth and pass it on to the next generation. I feel like I’m obligated to take this information, this knowledge I’ve gotten from my elders and mentors and spouse and community, and wrap it up and give it as a gift to the next person in line,” said Miller.

Cancer interrupted Miller’s life again in 2015 when her now 5-year-old son, Cruz, was diagnosed with leukemia.

He underwent 3½ years of treatment at Children’s Hospital, and in May he rang the bell, signaling the completion of his treatment.

Miller’s students and the Synergy families rallied around her throughout the ordeal, organizing meal trains and fundraisers, and dancers from other studios volunteered to run classes when Miller couldn’t make it.

“Whatever life throws at her, she rises above all, and we are so thankful that she is someone important in the lives of our children,” said Martin.

“If a costume didn’t come in right, or makeup isn’t right, or they can’t find a shoe, I’m able to look at them and say, ‘That’s OK,’ because it really is. Things that I can’t control are not worth the stress, and I pass that message on,” said Miller.

More importantly, it taught Miller the power of love.

“I preach love. Love will conquer most anything,” said Miller. “I was sitting in that hospital, and there was nothing I could do to fix him. But the one thing I could give him was unconditional love. So, moving forward, what I’ve learned and what I preach to people all the time is to go in and love, and love hard. It costs nothing. But it’s worth everything.”