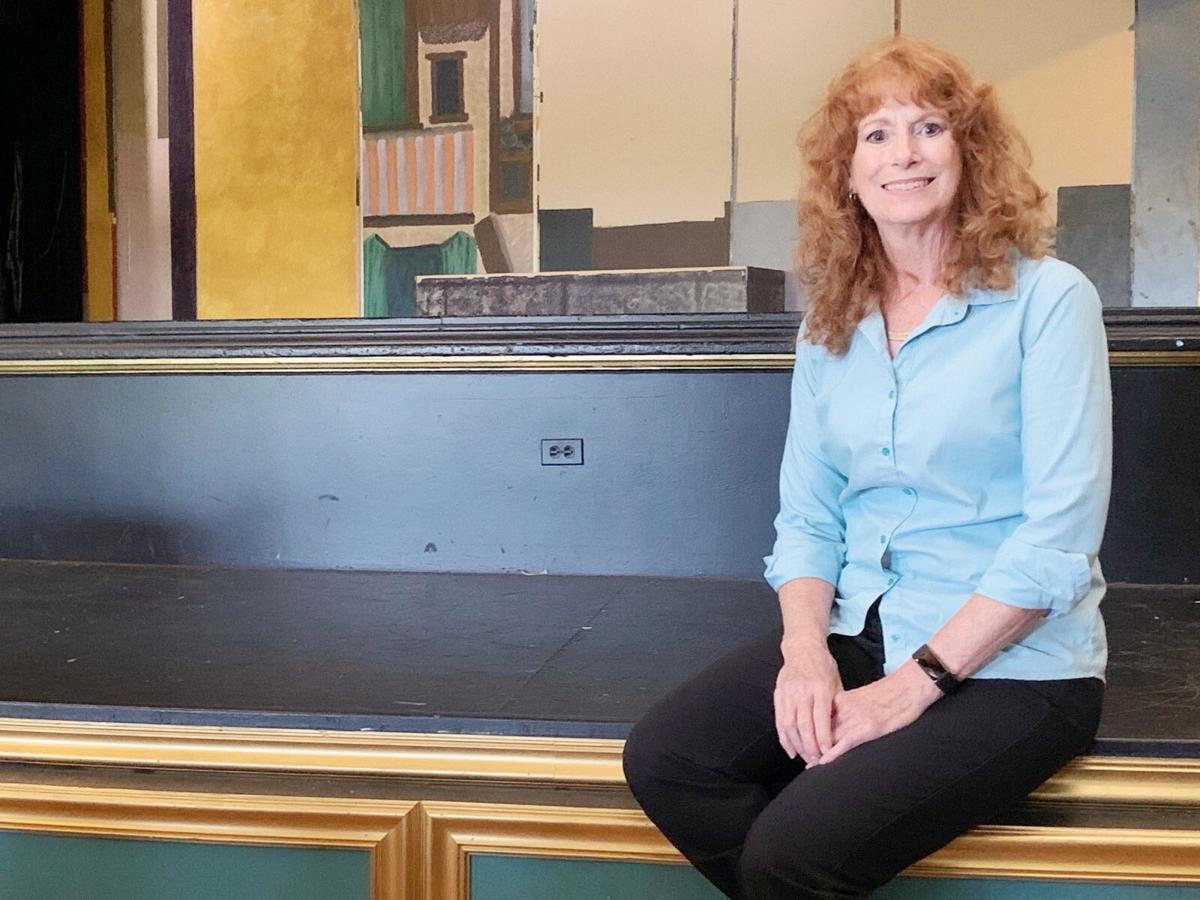 Cindy Berg is the artistic director at Old Schoolhouse Players. 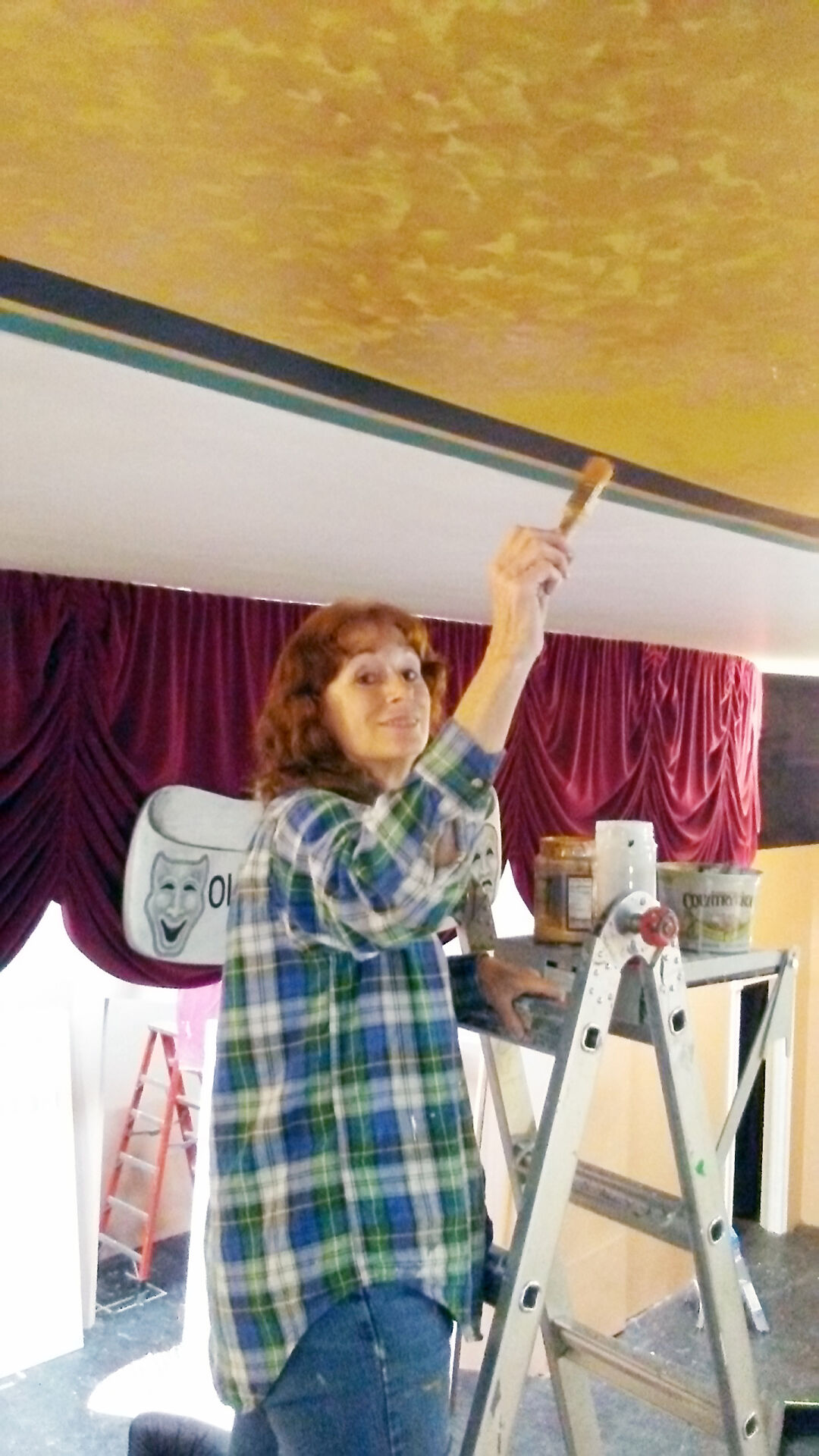 Cindy Berg, artistic director at Old Schoolhouse Players, paints during renovation of the 110-year-old building that houses the theater in Hickory. 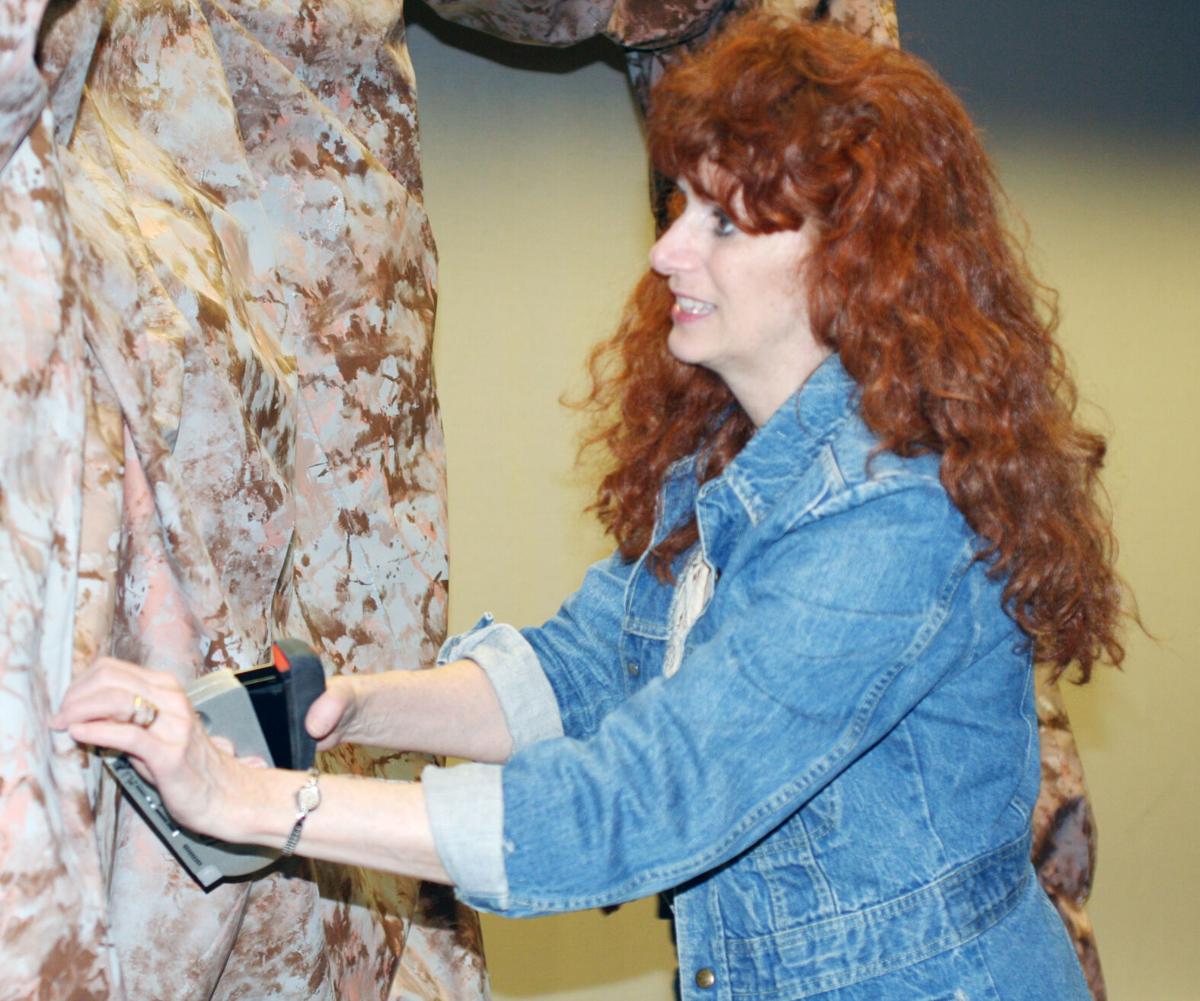 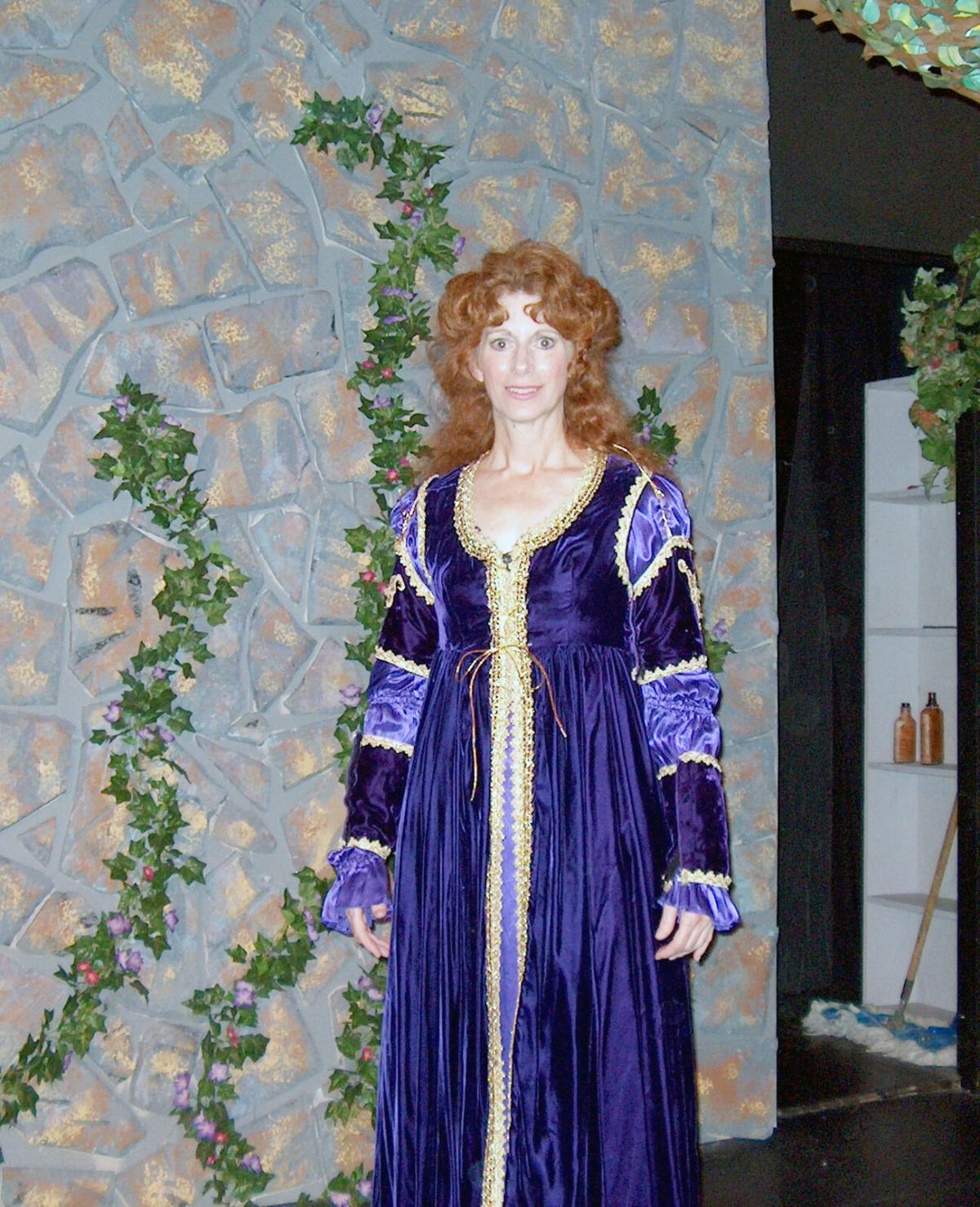 Cindy Berg playing the role of Katherine in Taming of the Shrew. The retired theater teacher at Canon-McMillan serves as artistic director for Old Schoolhouse Players.

Cindy Berg is the artistic director at Old Schoolhouse Players.

Cindy Berg, artistic director at Old Schoolhouse Players, paints during renovation of the 110-year-old building that houses the theater in Hickory.

Cindy Berg playing the role of Katherine in Taming of the Shrew. The retired theater teacher at Canon-McMillan serves as artistic director for Old Schoolhouse Players.

When Cindy Berg was in fourth grade, she wrote her first play.

“The teacher liked it so much that she decided to put it on,” said Berg, artistic director at Old Schoolhouse Players, a community theater in Hickory. “That was a thrill for me because I’d always been interested in theater, but I was an introverted kid.”

Berg followed up her play with a puppet show that she and her friends performed in other classrooms.

She continued to write over the years, but she pulled the curtains on her theatrical pursuits.

That is, until Berg was in her early thirties, when her daughter became involved in theater.

Berg took her middle daughter to Washington Community Theater for an audition for “The Music Man,” and one of the music directors with whom she was acquainted encouraged her to try out, too.

“It was one of those moments when you say to yourself, ‘You’ve always wanted to do this, you’ve always been hesitant, let’s give it a shot,’” said Berg. “I did, and I ended up with a part, and I found out that when you put on that costume, you become that character. It became an exhilarating experience for someone who was extremely shy. The more I did it the more I loved it and I realized I had a passion for it.”

Theater’s ability to help her overcome her shyness, coupled with the impact that theater has on children’s self-esteem – she witnessed dramatic changes in them – convinced her that she wanted to go into theater and to work with kids.

“Once I saw the how theater made a difference in children’s lives, I was bitten. I wanted to get a theater and teacher degree,” she said.

At the age of 34, Berg – who years earlier pursued a degree in fine arts but didn’t finish after she and her husband, Wayne, who was in the U.S. Navy, moved away – went back to college at Point Park University and earned degrees in theater and communications, and earned certification in secondary education with a theater specialty.

“I’m convinced I ended up in the right place at the right time. I think if I would have pursued it earlier, it wouldn’t have been so powerful for me,” said Berg.

Berg’s passion for theater and children led her to Canon-McMillan High School, where she served as a drama instructor and directed dozens of high school plays until she retired in 2014.

Her goal for every play and musical – from “Jesus Christ Superstar” and “Jekyll and Hyde” to “Seussical the Musical” – was to have it completely student-run.

“I insisted on that because it was important that it became their product. They always rose to the occasion,” said Berg. “Working with the kids was the best. That was the hardest part of walking away from teaching. It was a labor of love.”

Throughout the years, she also volunteered with the Old Schoolhouse Players. Since she retired, she has dedicated more time to OSP.

There are few tasks, big or small, that Berg won’t do: She selects plays, conducts auditions, casts the actors, helps with props, makeup and set design, bakes cookies and cakes to sell at intermission, and sells 50/50 tickets.

For her decades-long commitment to local theater and teaching children, Berg has been recognized with the Observer-Reporter’s ExtraOrdinary People award for September.

“I do feel that community theater is a wonderful vehicle for pulling in all different types of people from different parts of the community,” said Berg. “I’ve had lawyers performing alongside of plumbers, and kids involved in shows with adults, and they’re all super-passionate. They have different careers and occupations, but everybody has the desire to put out a production that appeals to everyone. Theater is a celebration of differences and how people can come together to create something beautiful.”

Rachel Berteotti, who teaches drama at Canon-McMillan, was a student of Berg’s who later became a colleague. She also is a member of Old Schoolhouse Players with Berg.

“I’ve known her since I was 16. Cindy was the kind of teacher that I strive to be,” said Berteotti. “Her approach was that anybody who wanted to be involved in theater could be involved in some way. She included all of the kids, even the kids who might not have had any other place where they felt they fit in. Cindy is probably the most patient person I have ever met, and she was especially patient and genuine and caring with the kids who needed it the most.”

Berg also has a gentle sense of humor, which she believes has “always been my greatest teaching tool.”

“She is easily the hardest-working person I have ever met, as she frequently works six days a week, especially during play and musical season, while maintaining an ever-present positive attitude and optimistic outlook,” said Burns. “She works very late hours on weekdays, weekends, and even snow days, holding rehearsals, running student set construction sessions, and working long after the students leave to complete intricate and brilliantly designed scenic projects.”

Berg and her husband, Wayne, a cabinet maker, live in Avella and are the parents of three children and three granddaughters.

On several occasions over the years, the plays became a family affair.

“They understand the passion. They’ve always been supportive of any of the projects I’ve done,” said Berg, noting that over the years, the kids and Wayne have gotten involved by acting in plays or helping out on set.

The COVID-19 pandemic has temporarily closed the theater. Coronavirus has impacted more than the theater, though. Berg and her husband contracted COVID-19 in early August and are still recovering.

“We’re on the other side of it now,” said Berg, who is still experiencing what she describes as “brain fog.”

“This pandemic has been hard for everyone in the arts. We’re trying to get a handle on when we’ll be able to open up. We’re all trying to help each other and keep things in place until we’re able to open up and get running. We will get through this.”

As part of the ExtraOrdinary People award, Washington Auto Mall and the Observer-Reporter will underwrite a $500 donation in Berg’s name to the charity of her choice. Berg has selected the Washington County Children and Youth Services Helping Hand Toy Drive, which distributes toys to children in need at Christmastime.