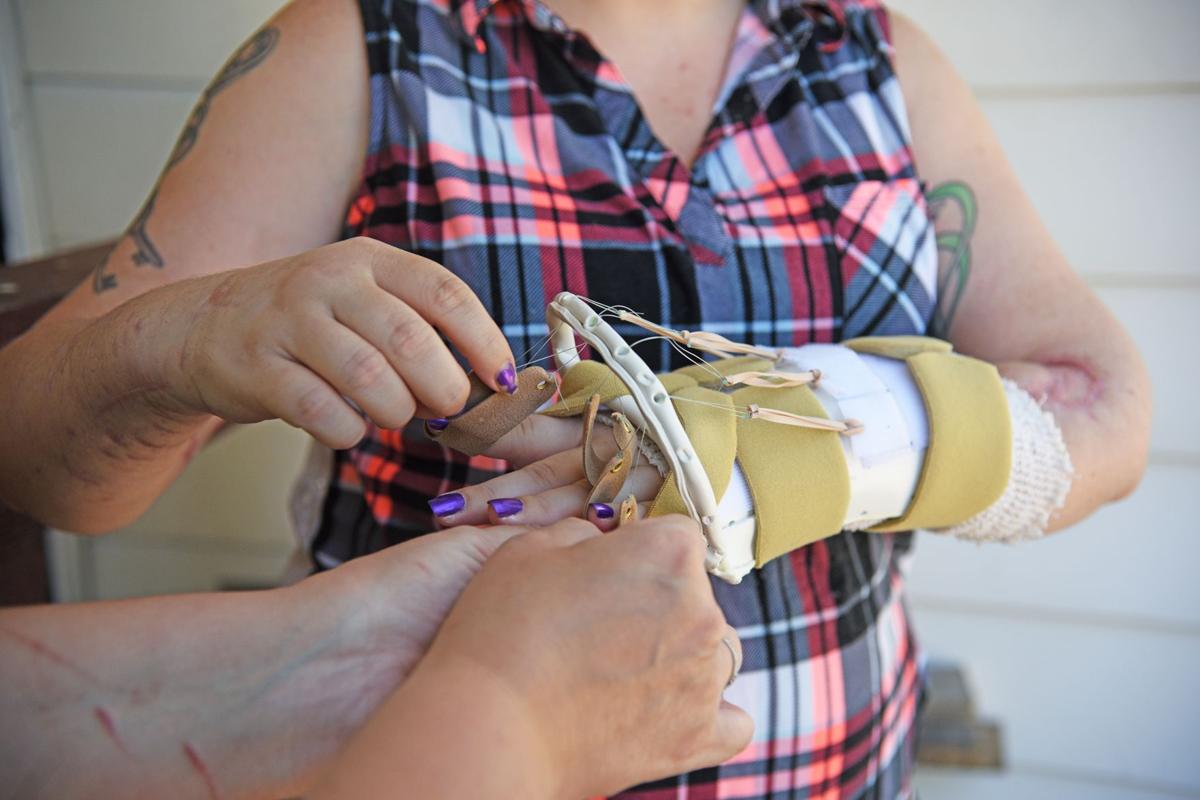 Amanda Welch helps her sister, Kylie Welch, put on a device to help her recover from injuries suffered in a dog attack at Angel Ridge Animal Rescue in Meadow Lands. 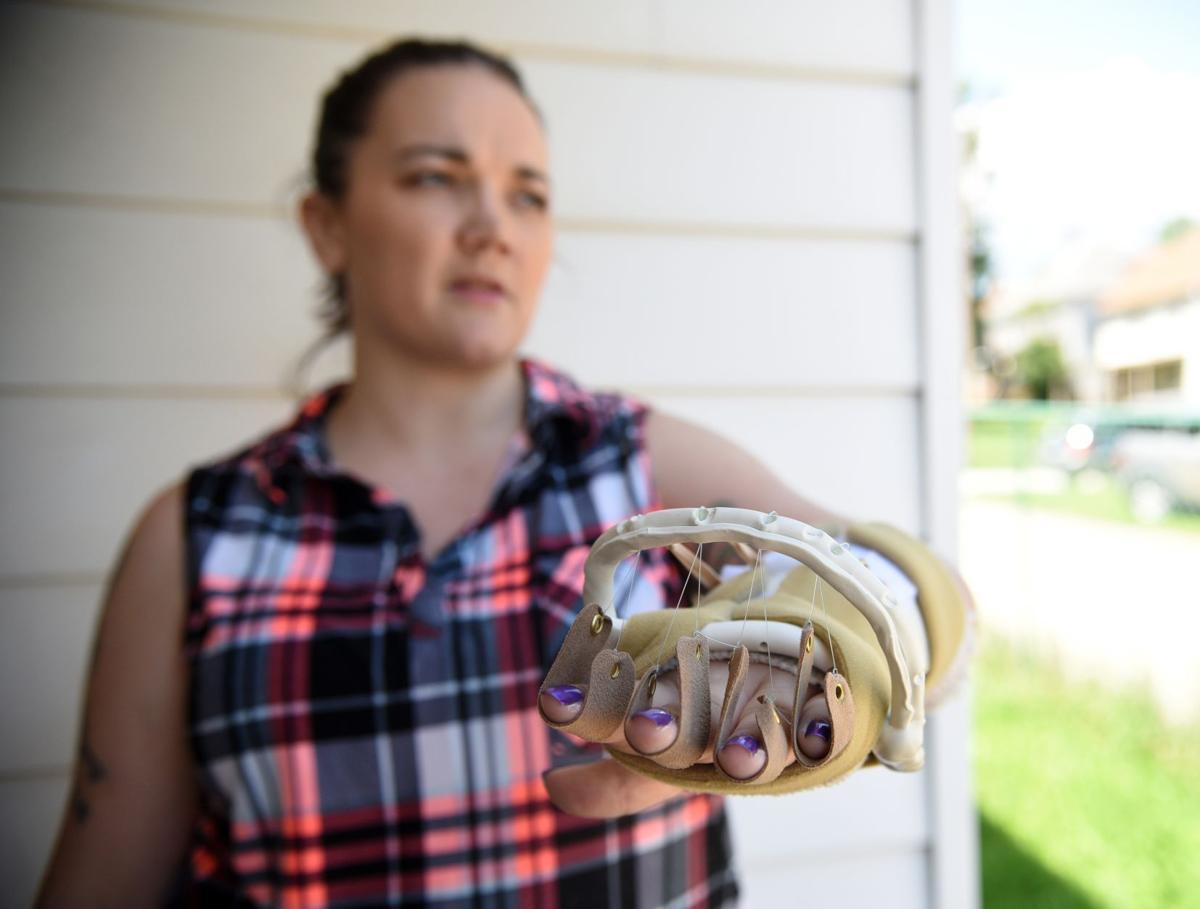 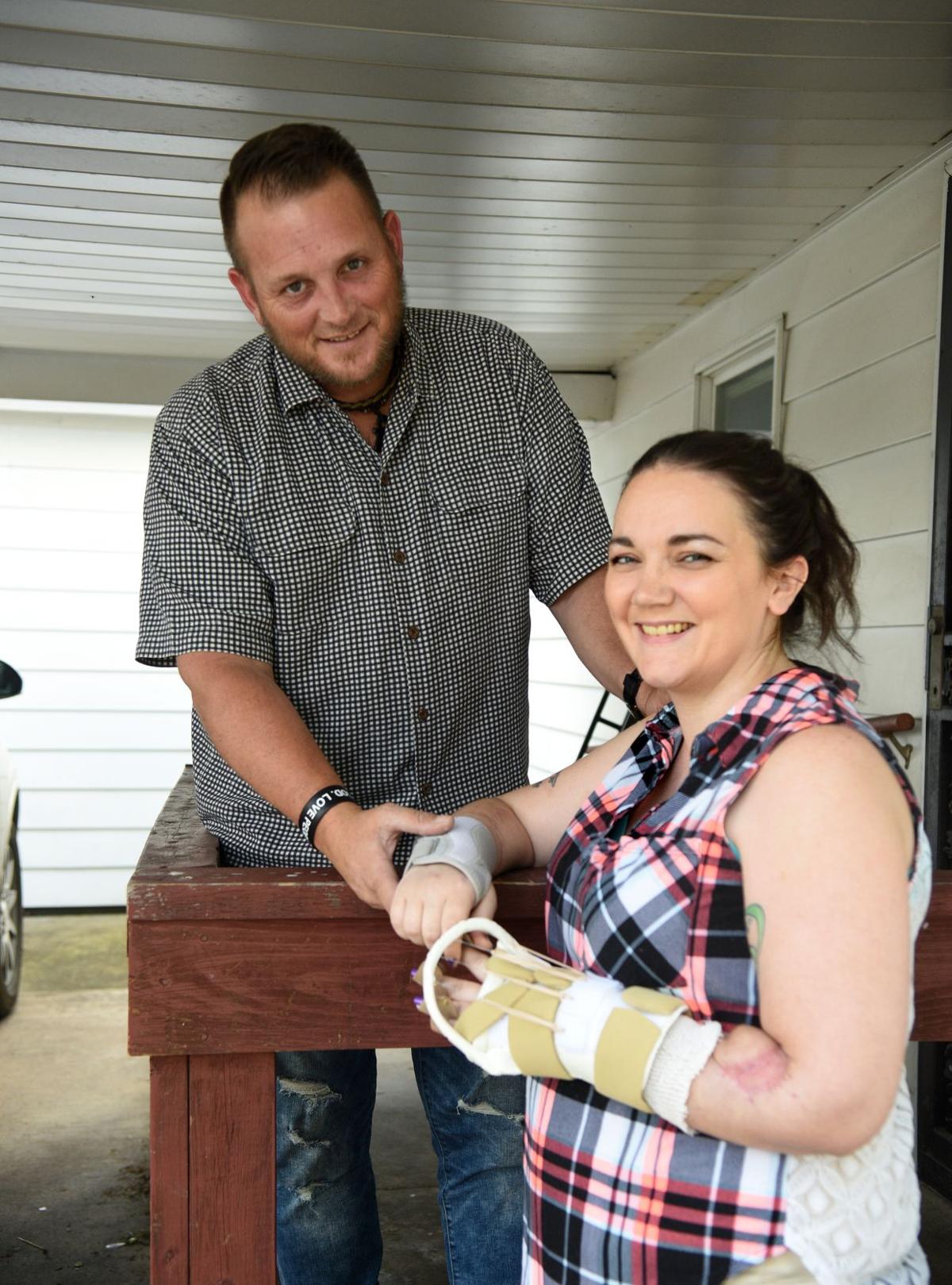 Kylie Welch with her rescuer, Justin Killion of Chartiers Township 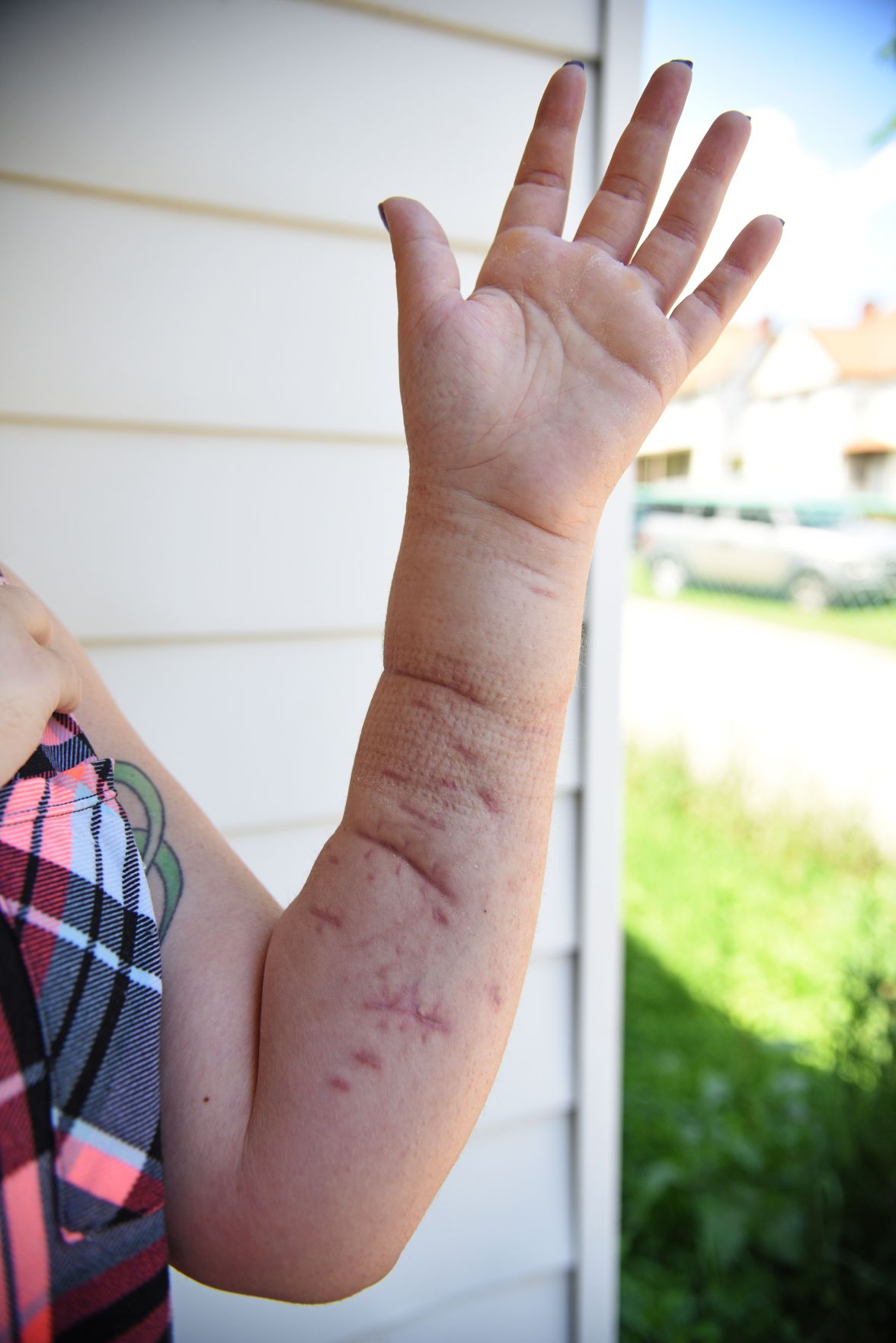 Kylie Welch will never regain full use of her scarred arms and hands.

Amanda Welch helps her sister, Kylie Welch, put on a device to help her recover from injuries suffered in a dog attack at Angel Ridge Animal Rescue in Meadow Lands.

Kylie Welch with her rescuer, Justin Killion of Chartiers Township

Kylie Welch will never regain full use of her scarred arms and hands.

Kylie Welch had given up.

After fighting against a pit bull that attacked her in an enclosed exercise yard at Angel Ridge Animal Rescue in Meadow Lands for “what felt like forever,” she decided to be quiet so her daughters, Emaly, 4, and Haylee, 8, who witnessed the attack, wouldn’t hear her screams.

“When he bit me the first time, I was like, ‘crap.’ I thought he was just going to bite me and be done,” Welch recalled last week, two months after the April 9 attack. “I remember I looked over at the girls, and Emaly had a completely terrified, awful expression on her face, and then he bit again, and then again. He didn’t just get hold of my arm. It was like when a dog plays with a rope toy, he was shaking his head, then regripping. I told the girls to run. Haylee grabbed Emaly’s arm, and they started to run. I had reached the point where I thought the dog was going to kill me.”

Then, she heard a man, Justin Killion, who rented a house close to the rescue shelter, yelling. Welch looked up and saw him running toward her, and she began to scream for help as loud as she could.

Welch, 33, of Washington, believes Killion saved her life, but he doesn’t consider himself a hero.

“I come from Texas, and by God, you’d be a cowardly son of a gun if you didn’t help somebody out. That’s what you’re supposed to do,” said Killion, 45.

Welch had been a volunteer at Angel Ridge for about six months and brought her daughters to the animal rescue facility that evening, where they took a male pit bull named Dallas for a walk. Without provocation, the dog, who was scheduled to be adopted the following day, bit Emaly above her eye and knocked her down, Welch said. The dog attacked Welch as she tried to pull him away from Emaly.

Killion’s daughter, Dakota Olszewksi, 12, was looking out a second-floor window and shouted for him when she saw what was happening.

“She said, ‘I think something bad is happening to somebody. I think they’re getting attacked by a dog,” said Killion, who had just returned home from a Chartiers Township youth baseball meeting that was scheduled to last three hours but ended after only l5 minutes. “I said, ‘Oh, honey, that’s where they turn them out and let them play. Thirty seconds went by, and she yelled my name again, and that’s when I went running outside. I yelled for (Kylie) to tell me if she was OK, and then I heard one of those horrible screams, and I started running and I climbed over the gate. The dog let go of her, then it came back.”

Killion tackled the animal to get it off her, but the dog was covered with blood, and he couldn’t get a grip on the animal.

He threw himself over Welch’s body to shield her from the dog, and he kicked and punched the dog each time it returned.

“He was relentless. He kept coming back. I physically kept myself between her and the dog. He was running into me to get to her,” said Killion, who called 911 while fending off the dog. “He wasn’t trying to bite me; he was trying to bite her. She was facedown and worn out. I thought I heard her say, ‘I’m giving it up to God,’ and I said, ‘Not yet.’”

Welch was bleeding heavily, so Killion used his belt and a dog leash as tourniquets.

The dog ran away when Killion’s daughter threw a gun over the fence. Welch’s daughters and Dakota took shelter in the truck of a man who was headed to feed his horse at a nearby stable.

Killion, who waited with Welch and made sure she remained conscious until medical personnel arrived, was stunned by the extent of Welch’s injuries.

“It was the worst thing that I’ve ever witnessed. It was gruesome. I didn’t know if she was going to make it,” said Killion. “This dog almost killed her.”

The dog was later euthanized.

Welch, a mother of five who works at a day care center and is a photographer, was flown by medical helicopter to Allegheny General Hospital, Pittsburgh, where she underwent surgery to repair severe injuries, including a broken right arm that required two plates and 12 screws, puncture wounds and gaping holes in her arms, and muscle, tissue and tendon damage. She spent 12 days in the hospital and has had a total of four surgeries. She is undergoing occupational therapy, but will never regain full use of her scarred arms and hands.

Chartiers Township police Chief James Horvath called Killion’s actions one of the most heroic acts he has seen in his years on the police force.

“There is absolutely no doubt in my mind that if Mr. Killion hadn’t been there and done what he did, we would have had a fatality,” said Horvath. “He was a hero that day, and that little girl and her mom are alive because of him.”

Killion and Welch have struck up a friendship. He sent Welch flowers and visited her while she was in the hospital, and she updates him on her recovery through text messages.

Welch said no words can describe how grateful she is that Killion put his life in danger to save hers, and acknowledged she can never repay him for coming to her and her daughters’ aid.

“I just feel sorry as hell for her having to go through all of that,” said Killion, who owns Killion and Sons Well Service Inc. in Houston. “But my daughter’s the hero. Without Dakota, there would have been nobody saved. I wouldn’t have known what was going on and I wouldn’t have gotten there. I believe in a higher power that just put everything into place. I’m just glad those girls are all right.”