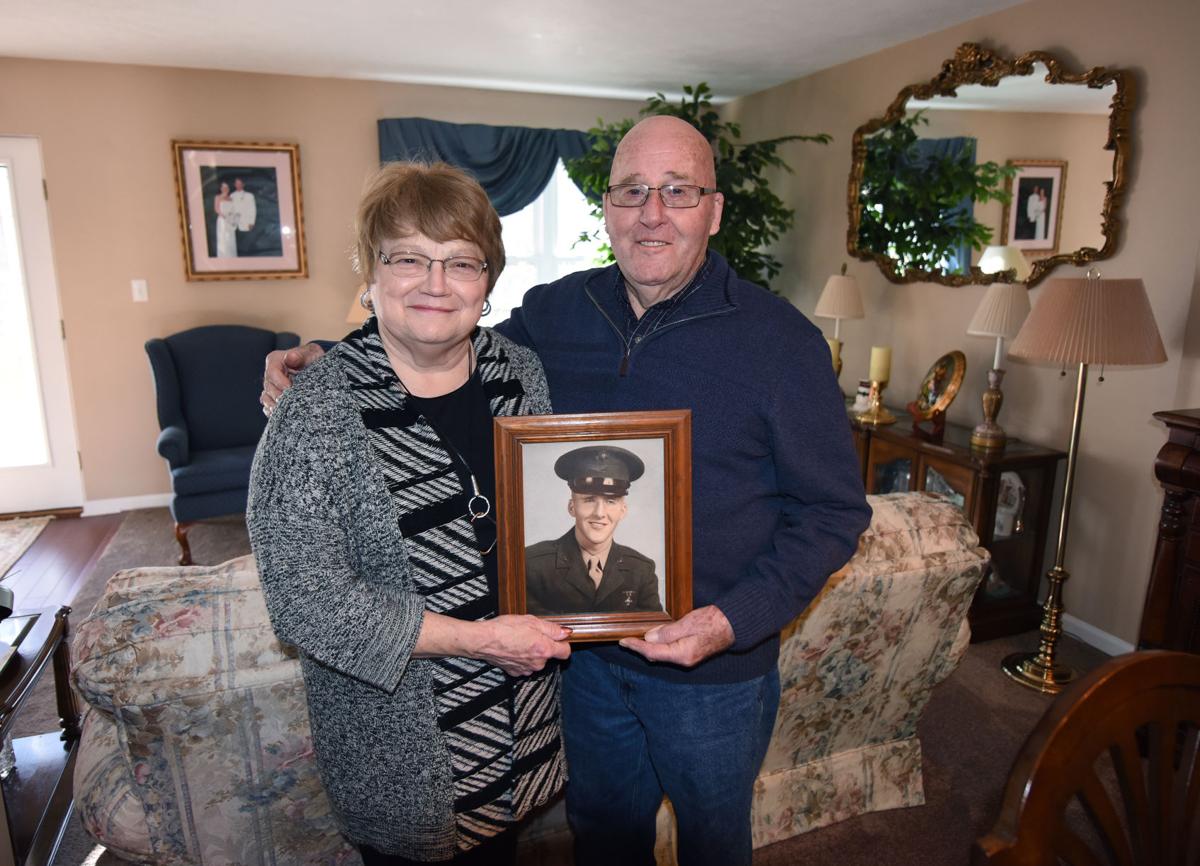 Joyce and Don Bailey hold a photo of Don taken when he was in the Marine Corps. 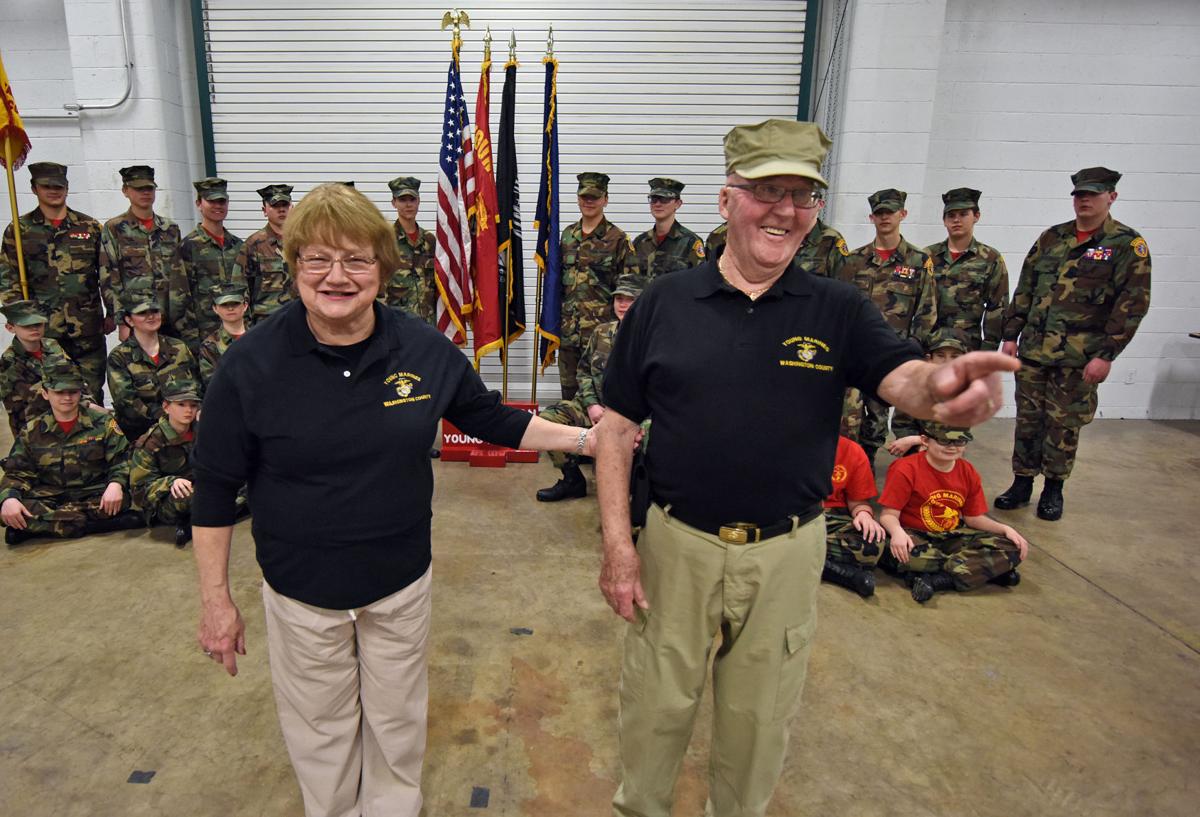 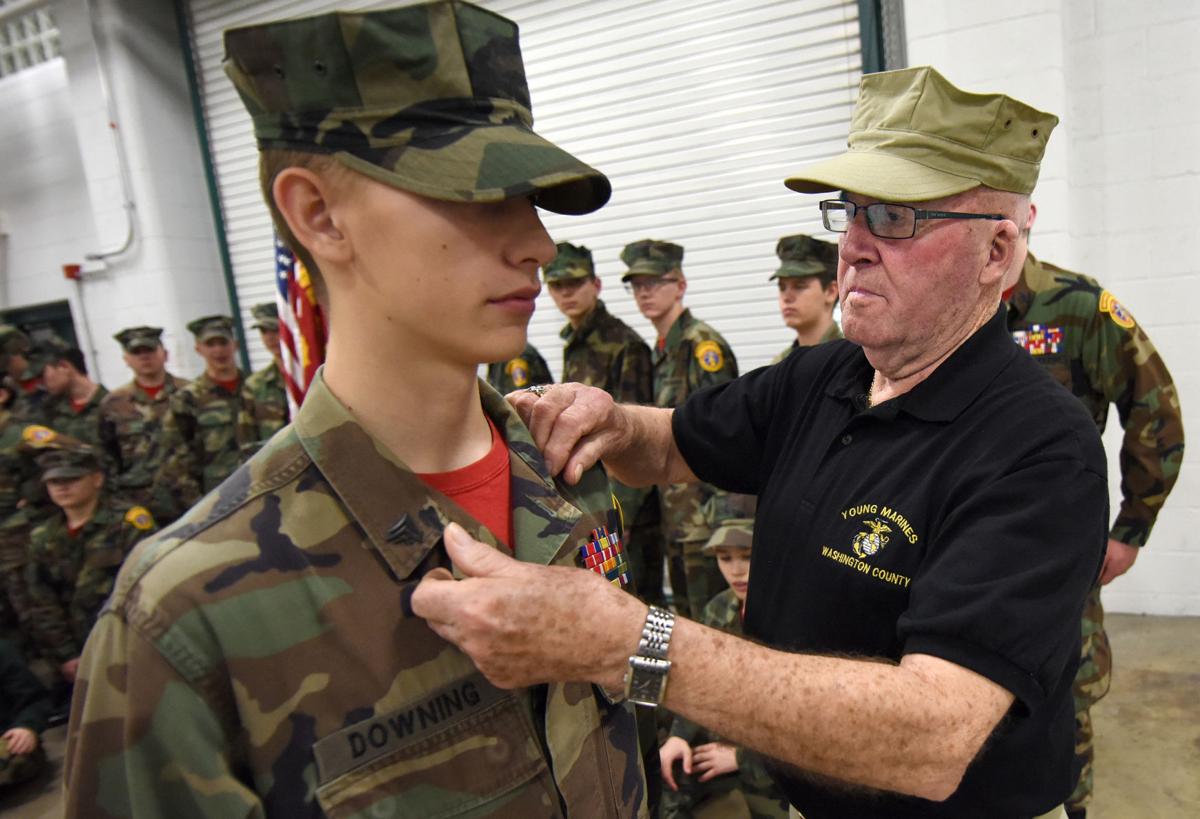 Don Bailey straightens the collar of Charles Downing, a member of the Washington County Young Marines. 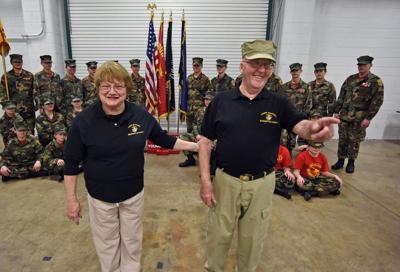 Two weeks after high school commencement, Don Bailey was a Marine. Enlisting was a bold decision, but one he has never regretted.

“I lived it and I slept it,” he said of being a jarhead. “The Marine Corps just makes you a different individual. It makes you one of ‘the few, the proud.’”

Bailey served in the corps for three years, then in the Marine Reserves for 19 before retiring. The temptation is to refer to him as a former Marine, but “former” is not in the lexicon of many who have served in this branch. “Once a Marine, always a Marine” is, often, the prevailing mind-set.

Count Bailey among them. Now 79, nearly 61 years after entering the military, he remains a Marine to the core. Bailey and his wife, Joyce, fly U.S. and Marine flags in front of their Canonsburg townhouse and set up a Marine march on their answering machine. And their calling card today is the organization they direct, one that bears the Marine name and embodies its values.

Don and Joyce Bailey are driving forces behind the Washington County Young Marines, serving people age 8 through high school graduation, who reside mostly in Washington and Greene counties, but are welcome from across state lines.

“A man and woman from Moundsville (W.Va.) recently brought their two sons to join,” Don said.

The Young Marines program, with 270 units in the U.S. and Okinawa, promotes the teaching of life skills and leadership skills and encourages healthy, drug-free lifestyles. Members also participate in activities, fundraisers and other public-service events, including local parades. The U.S. Marine Corps does not oversee this organization, but provides financial and logistical support.

Washington County’s unit celebrated its 10th anniversary last fall, with the Baileys on board all the way. The couple’s longtime service with this nonprofit group is why they were nominated, and selected, for the Observer-Reporter’s ExtraORdinary People award for February.

They oversee a unit with 34 members, six of them female. The group and its adult leaders meet weekly at the Army Reserve Center in South Franklin Township.

Although Don Bailey stresses that his group is “not a recruiting tool for the Marine Corps,” he said some former members actually have become jarheads. Bailey said a current Peters Township High senior plans to join the corps following graduation.

But regardless of the paths members eventually take, Don, the unit commander, and Joyce, the adjutant, enjoy working with that age group.

“These kids keep us going,” Don said. “We have no grandchildren.”

“I tell Young Marines they’re all my grandchildren,” Joyce said.

Retaining membership requires 50 hours of community service a year, but there are ample opportunities to acquire them. The unit donates annually to the 2000 Turkeys campaign, works with the Canonsburg Food Bank and participates in parades, gravesite services and other local endeavors.

Discipline and preparation are at the foundation of the Young Marines.

“We tell kids they have to have a Plan A and a Plan B,” Don said.

Avoiding drugs, at a time when the nation is experiencing an opioid epidemic, is a message that Washington unit leaders strive to reinforce.

“Our objective is to keep them drug-free and off the streets,” Joyce said. “We do 12 programs a year on drugs.”

Don and his Marine experiences, most assuredly, are at the root of the Baileys’ involvement with the Young Marines.

“I had no ties at all to the Marines until we met,” Joyce said.

“I trained her well,” Don countered, with a smile.

Don, the son of a coal miner from Westland, graduated from old Hickory High School in 1957 and followed an older brother, Richard, a Korean War veteran, into the Marines. After nearly a quarter-century, combined, in the corps and reserves, Don retired in 1979, then sold vehicles at South Hills Chrysler for many years. He has had two heart attacks – with no heart damage – and bypass surgery, yet gets around well.

He will be 80 this year. His brothers, Robert and Richard, are 86 and 84 respectively.

Joyce, 69, a Peters Township alumna, was a full-time nanny for 48 years. She and Don have been married for 48 years and have one child, Jodi Lynn Bailey of Knoxville, Tenn.

Husband and wife were heartily endorsed by several Young Marines parents, who nominated them for the award.

“The Baileys planned and took our young adults to Parris Island (S.C.) so they can learn firsthand what Marine recruit training is all about,” Dawn Baker wrote. “We are forever grateful for the sacrifice they have given to not only our country, but to our children.”

Miranda Chapman wrote that “my son has flourished in the organization and has gained a self-confidence and will to succeed that I attribute to the Baileys.”

Leanora Cypher said she and her spouse have dealt with significant health issues, “but the Baileys ... have been there for every question or motivational concern Caleb has encountered that (we) are not able to answer. In my opinion, they are living angels ...”

Editor’s note: As part of the ExtraORdinary People award, Don and Joyce Bailey will be given $500, underwritten by the Observer-Reporter and Range Resources, to donate to the charity of their choice. They have chosen the Marine Corps League of Pennsylvania Foundation.

Don and Joyce Bailey, with Washington County Young Marines, were chosen as the Observer-Reporter’s “Extraordinary Person” for the month of Feb…