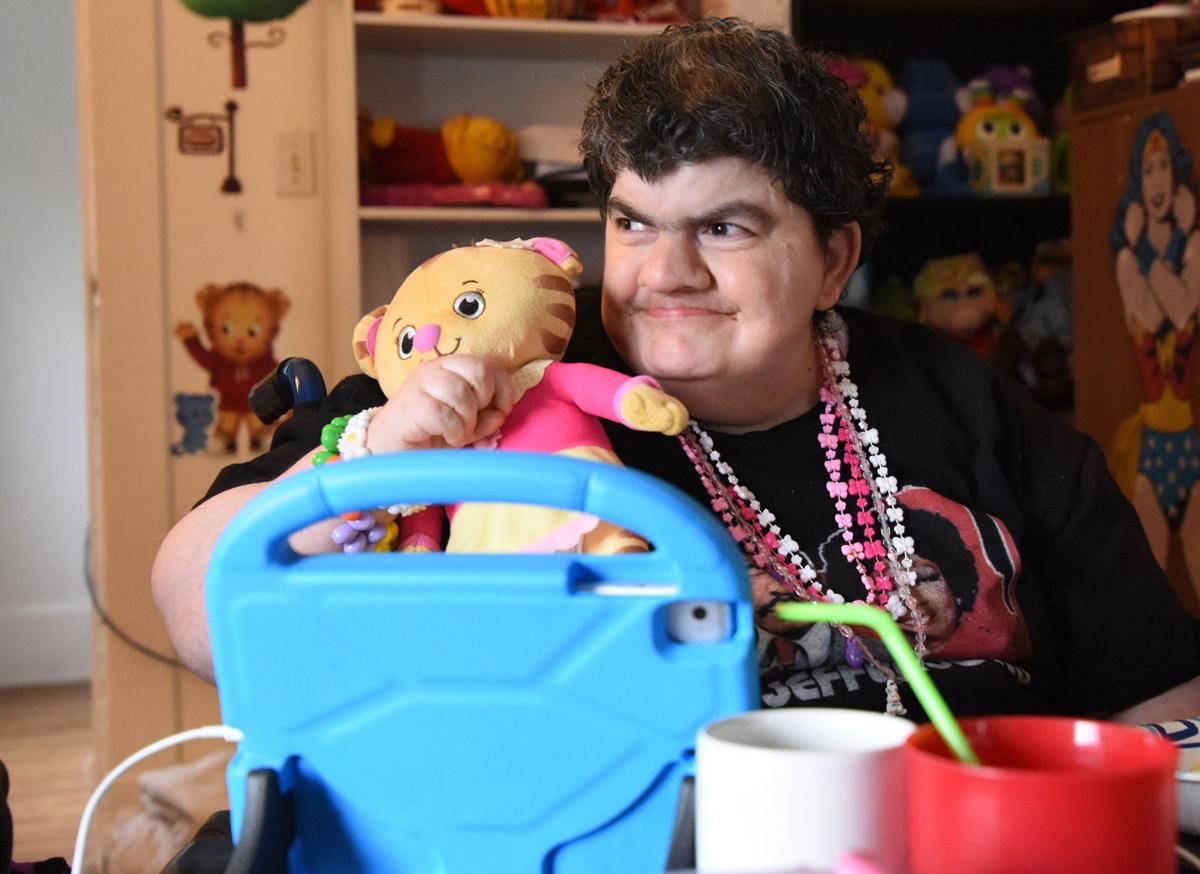 Margie Smith hugs one of her stuffed animals, “Margaret,” at her home in Canonsburg. 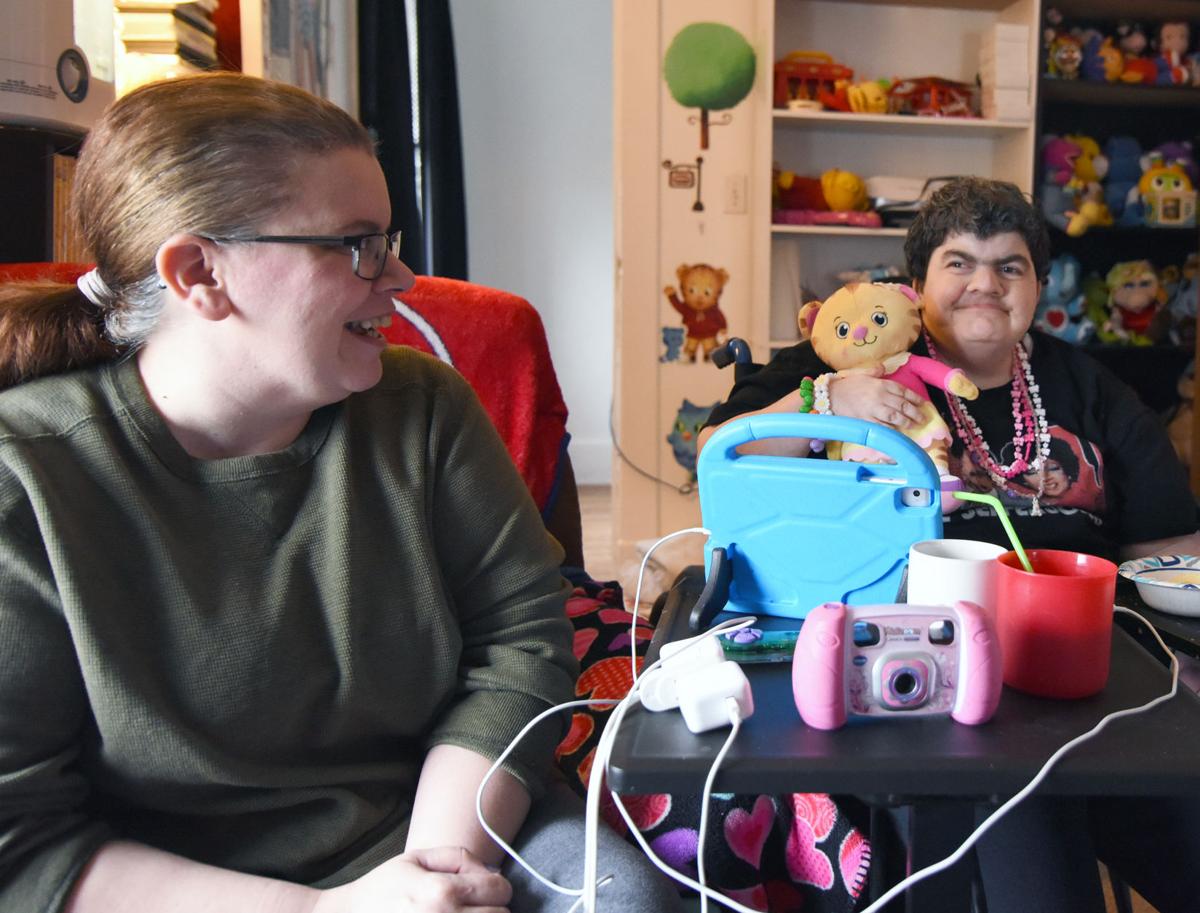 Fran Smith, left, sits with her sister Margie in their Canonsburg home. Fran is Margie’s caregiver. 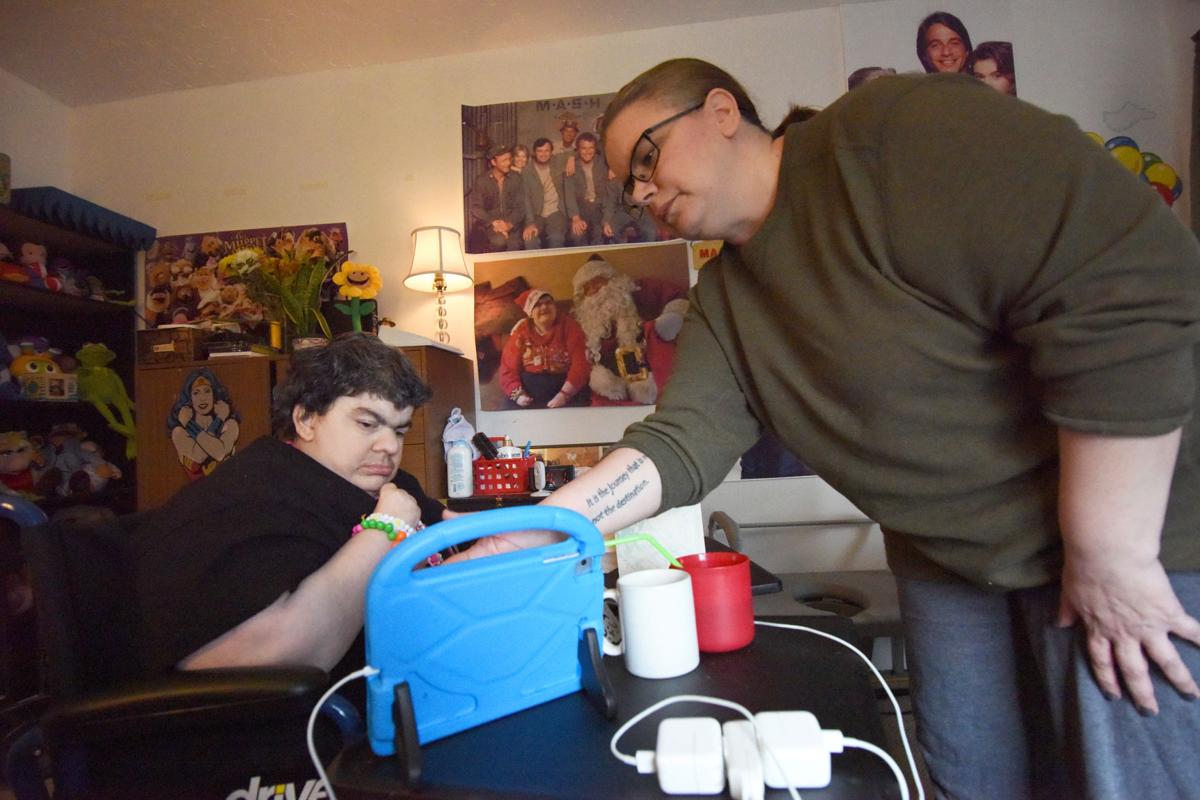 Those suffering from heart ailments can turn to the American Heart Association for help. The American Cancer Society aids people and families battling that life-threatening disease.

So where do you seek assistance about a syndrome so rare that many doctors may not have heard of it?

Such has been the decades-long story of the Smith family and a member who has what is known as Cornelia de Lange Syndrome, named for the Dutch pediatrician who identified its symptoms in 1933.

The cdlsusa.org website states the syndrome is present in one in 10,000 live births, and the Cornelia de Lange Foundation serves about 2,500 people with the syndrome in the United States.

Margaret Rose Smith, 45, of Canonsburg, was diagnosed within a year of her birth, and back then, she was not expected to live beyond her teens. The life expectancy for this cohort seems to have improved over time.

Sadly, the internet has many memorial tributes to infants diagnosed with the syndrome but who did not survive.

The cdlsusa.org website also says that many identified with the syndrome live to be adults with intellectual delays that range from mild to profound. Physical symptoms can include low birth weight, slow growth, upturned noses and smaller-than-average head size.

Margaret Rose, nicknamed Margie – pronounced with a hard “g” – has exceeded expectations. And while the internet has been a vehicle to spread the word about Cornelia de Lange Syndrome, when the monthly newsletter arrives, her sister and caretaker, Franchon “Fran” Elizabeth Smith, doesn’t find much that applies to their situation.

Margie’s mother found out about the Cornelia de Lange foundation about 20 years ago.

Margie, according to her sister, has the mind of a 4-year-old. She has a small vocabulary, using one or two words at a time. But in her Intermediate Unit I classes, she learned to use sign language. She made up a sign for Muppet character Kermit the Frog, a variation she devised from the sign for turtle. She likes bright colors and wearing T-shirts that depict her favorite sit-coms and cartoons.

The cdlsusa.org website states, “Developmental areas of strength include visual-spatial memory and perceptual organization and thus the use of computers, tactile stimulation and visual memory may be of benefit over stand methods of verbal instruction.”

What this means in the life of the Smith family is that Margie has taken to electronic devices, recording five-minute videos on a camera that she can watch again and again. She enjoys listening to a digital audio player and uses a cell phone. She maneuvers through her tablet computer as quickly as any tech-savvy adult.

Margie shows a visitor videos transfered from her favorite home movies, one showing a toddler-sized Margie on a swing, at play with friends and family her age. In another, recorded on a big day during Margie’s childhood, she is seated on a table next to her birthday cake, blowing out six candles.

“She didn’t really start growing until she was 7, 8 years old,” recalled her mother, Barbara Smith.

The little girl grew to a full adult height of 4 feet, 6 inches. Short stature is a typical manifestation found in those who have Cornelia de Lange Syndrome.

Long before America took note of the recent 50th anniversary of the first airing of public television’s Fred Rogers’ “Mister Rogers’ Neighborhood,” his characters had special importance to Margie.

Many fans associate the gentle persona of Fred Rogers with that of his first puppet, Daniel Striped Tiger.

Margie was so touched that the new baby tiger shared her name that, Fran said, she “cried through the entire episode.”

Fran is a year and three months older than her sister, so the two grew up together in several parts of Pennsylvania, from Scranton to Uniontown and East Bethlehem Township.

“She started school when I did,” Fran recalled, and she has stuck with her sister through thick and thin.

“I try not to introduce a lot of new things,” Fran said.

A 1997 graduate of Waynesburg College who majored in English and professional writing, Fran became a captioner for Southpointe’s VITAC, starting with the firm in 2000. She now works from home, an arrangement that fits in with her role as caretaker for her sister and their mother, who continues to recover from the effects of a stroke.

Fran became the legal guardian for her sister so she could make medical and other decisions for Margie. It was a year-ong, complicated process, prompted by concerns related to the Health Insurance Portability and Accountability Act.

They now call Canonsburg home, and although change is not always easy for Margie, after they moved to the borough, Fran asked her sister what she thought of their new place. Margie gave her a “thumbs up” sign with her tiny hand.

Margie’s feet are tiny, too. She wears a child’s size 2. As recently as five years ago, she was able to walk alone, employing a gait similar to a stomp. She now uses a wheelchair, but Fran said Margie is not as afflicted physically as some who have been diagnosed with the syndrome.

Margie suffered from grand mal seizures, but her neurologist’s prescription for medication has brought them under control.

“Fingers crossed, Margie, she hasn’t had a seizure for a year,” Fran said.

Gastroesophageal reflux presents a host of dietary considerations for Margie, and the cdlsusa.org website states that heart defects and joint problems are another concern among those diagnosed with Cornelia de Lange Syndrome.

Research has not come up with a definitive answer to the question, “What causes Cornelia de Lange Syndrome?”

The cdlsusa.org website states, “Currently, researchers find a gene change in about 60 percent of individuals with Cornelia de Lange Syndrome.... Even in individuals with classic features of CdLS, gene mutations are not always found.”

Medical professionals have asked if they can test Margie, but she hates medical procedures involving needles, so genetic testing that involved drawing blood would be too traumatic.

“Keep it on an even keel,” is Fran’s philosophy of caring for her sister.

“She’s always had family with her, right Margie?” asked Fran, whose tasks include determining what ails Margie or what hurts. “I think cause and effect kind of works for her.”