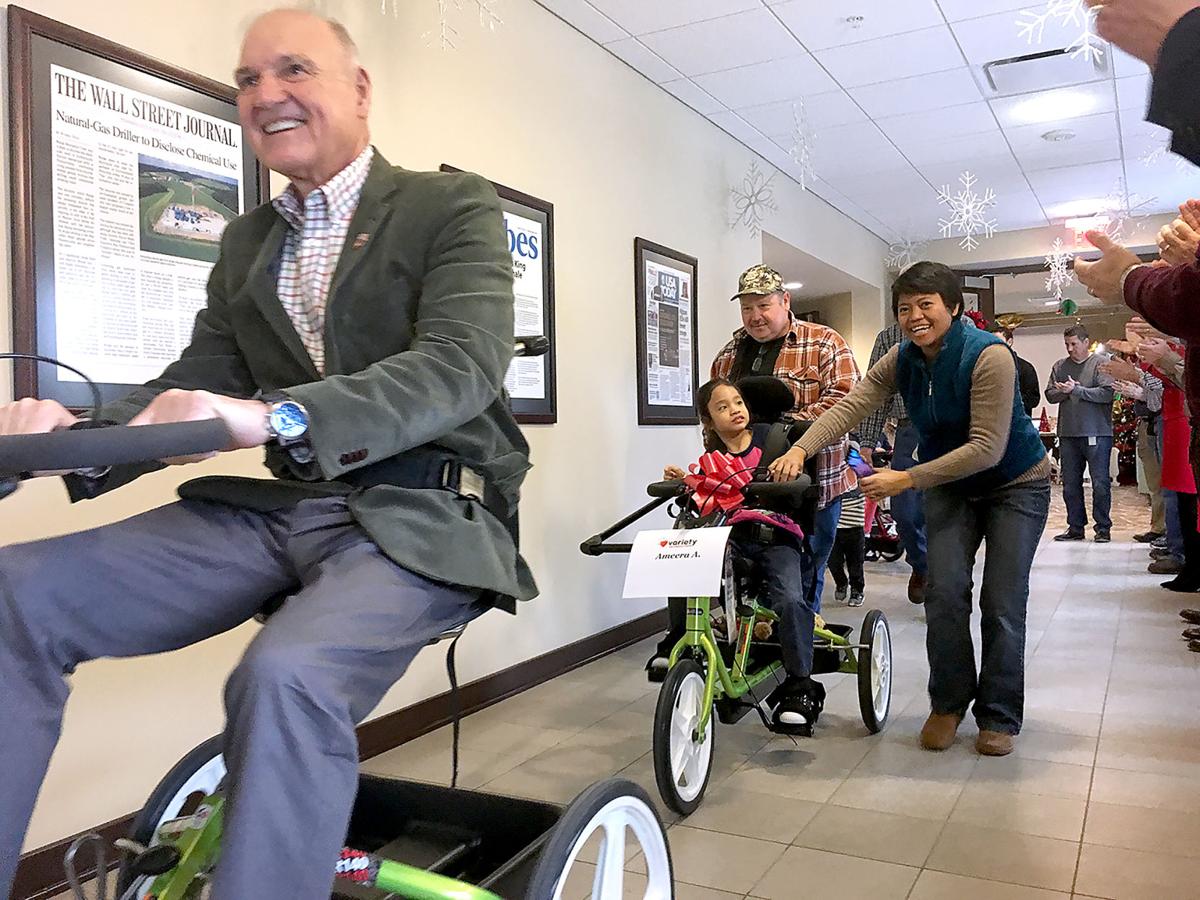 Washington County Commissioner Larry Maggi leads a parade of adaptive bikes Wednesday at Range Resource’s Southpointe office. Ameera and her parents, Harry and Indrie Salisbury of Eighty Four, are hot on his heels. 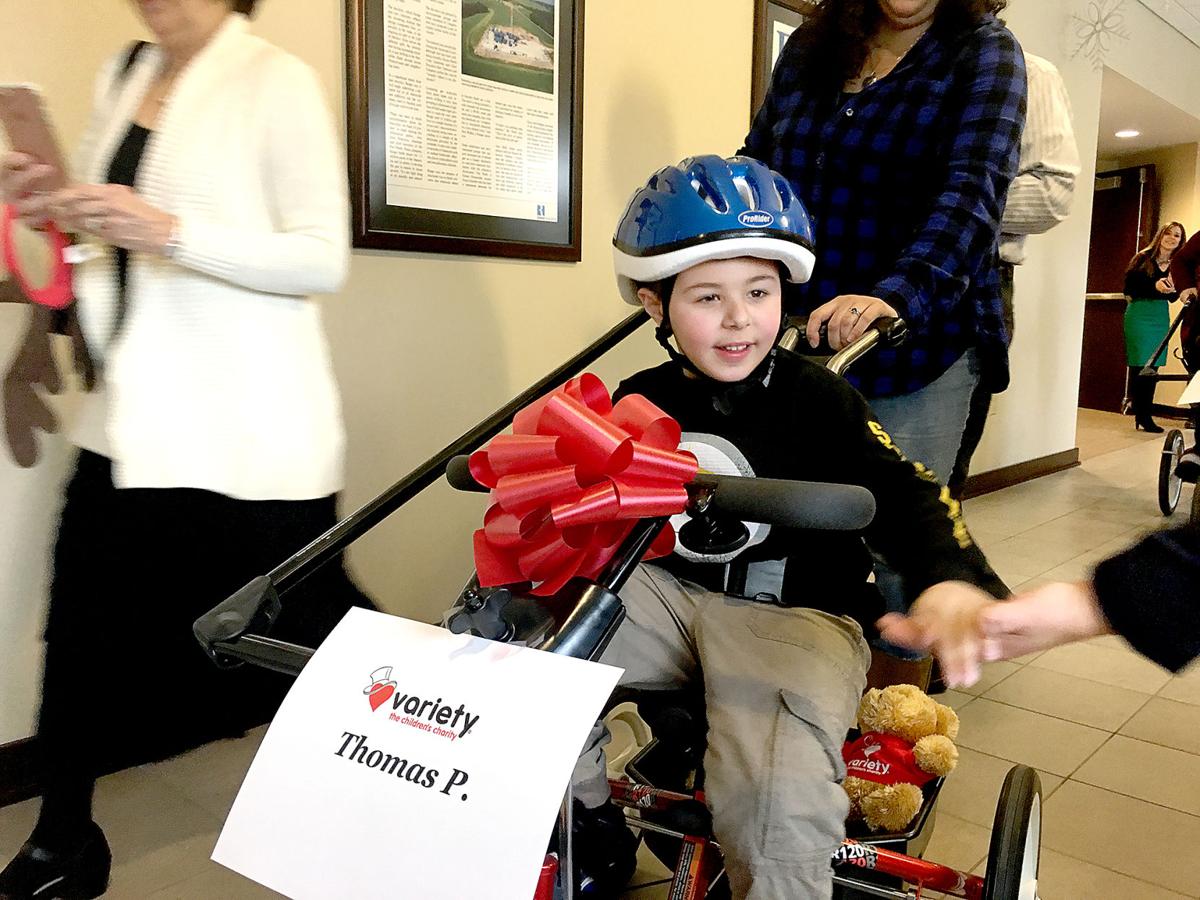 Thomas rides a customized bike he received from Variety. He was one of eight area children to receive a bike Wednesday. 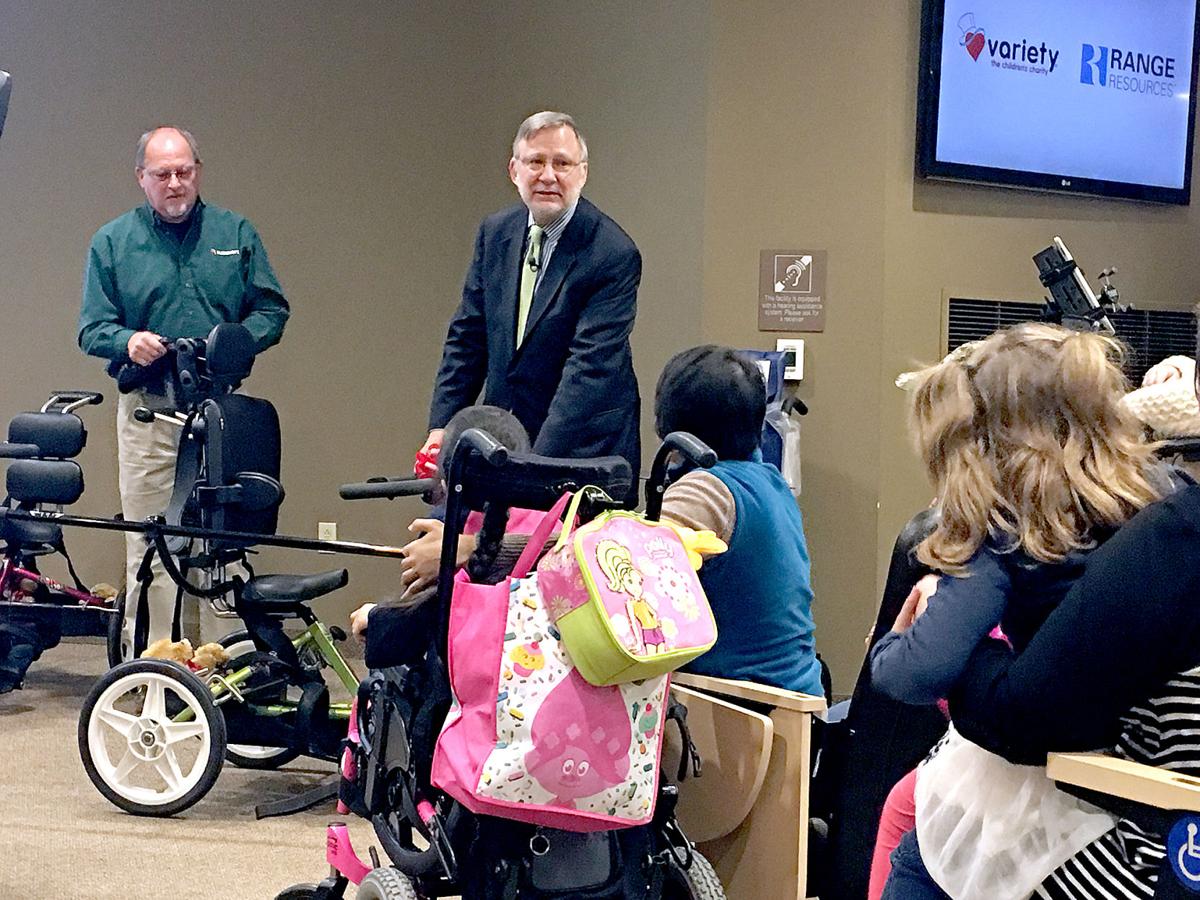 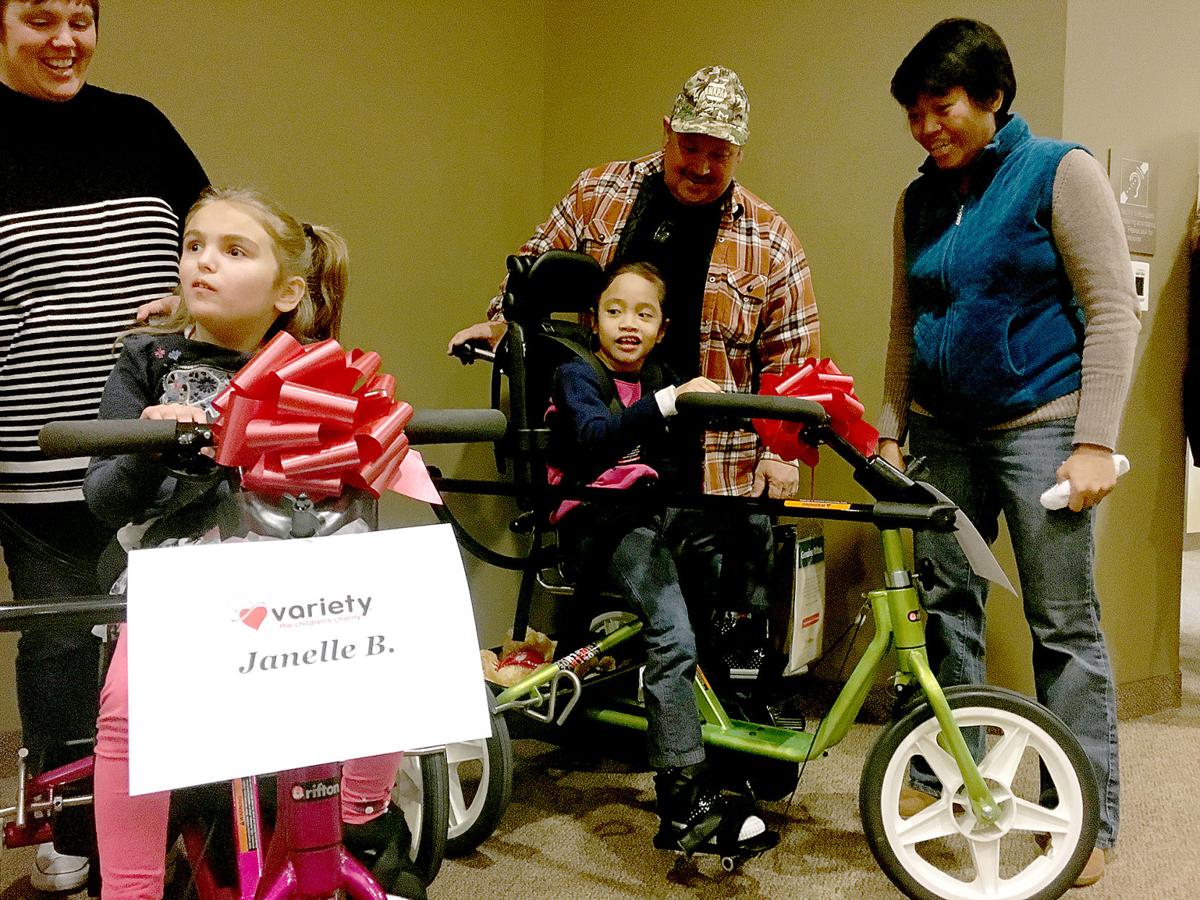 Janelle, left, and Ameera, take a spin on their new bikes.

CANONSBURG – All of Ameera’s accomplishment are major in the eyes of her parents. So, when the 7 year old was able to grasp the handlebars of her new bike Wednesday, it was a miracle, said her father, Harry Salisbury of Eighty Four.

“She is not crawling,” said Ameera’s mother, Indrie. “Using the bike will help her. It’s a huge accomplishment.”

Ameera has epilepsy. Her brain has not developed at the same rate as other children her age, and it’s a challenge for the long-limbed little girl to hold her body erect. But Wednesday, with the help of her new green bicycle, Ameera sat tall as she rode in a parade through the halls of Range Resource’s Southpointe office.

She and seven other children from the area were presented with bikes from Variety-The Children’s Charity, which provides adaptive bicycles, strollers and communication devices to children with special needs.

Ameera received a bike and stroller, which her parents said will allow the family to take her to places she previously couldn’t go.

“Her other stroller is too big. She couldn’t go to the grocery store,” said Indrie.

Giving children with special needs the same opportunities for mobility and communication as any other child is really the point, said Variety CEO Charles LaVallee. One of the organization’s beliefs is that the devices provide joy, freedom and belonging.

“All of our kids need to have their confidence built,” said LaVallee.

LaVallee accepted a donation of $5,000 from Range Resources Wednesday as employees, joined by Washington County Commissioners Diana Irey Vaughan, Larry Maggi and Harlan Shober, gathered to witness the children receive their bikes and take a spin through the halls.

There were tears, laughter and shouts of excitement from the children as LaVallee talked with parents, who told the audience what the gifts meant to their families. The devices allow the children to socialize with other kids in their neighborhood, said one dad. A mother said the bike would allow her daughter to be outside with the family, and give her the opportunity to learn to ride a bike with her little brother.

Brenda Dare, of Transitional Paths to Independent Living, told the parents that at 45 years old, she just recently purchased her first bike. Dare, who uses a wheelchair, said the opportunity to ride a bike is a new beginning for the children, which could be scary for the parents.

“It’s a kind of independence they haven’t known yet,” she said. “Celebrate this day.”

Variety provides devices to children in 54 counties in Pennsylvania and West Virginia.

When they started five years ago, said LaVallee, they wondered if they would be able to provide bikes to 50 kids. Since 2012, they have provided more than 1,200 adaptive bikes to children.

Each bike costs about $1,800 and is designed for the specific child.

Today, Variety has about 500 bikes, strollers and communication devices that they could give to children with a need. The challenge, said LaVallee, is finding the children who could use one, and having parents and guardians realize there is no catch and that the bikes are top quality. That’s why, he said, partnerships, like those with Intermediate Unit One, are so important.

The educational service agency connects families with the organization and lends credibility to what LaVallee said some see as a program that is “too good to be true.”

“I had a dad that said, ‘What’s the catch?’” said LaVallee. “He couldn’t believe his family qualified for a free bike.”

LaVallee explained that the income guidelines for the “My Bike” program aren’t restrictive. For example, a three-member household could have a yearly income of up to $102,100 and still receive a bike. Even families with a healthy income may not have the disposable funds to purchase a bike, he said. Families with children with disabilities incur greater expenses due to medical costs, therapies, adaptive equipment and medication.

A mother told LaVallee recently that she paid more on the family’s adaptive van’s monthly payment than for their home’s mortgage.

“That cost is huge,” he said. “That’s why our income levels are like they are.”

LaVallee, who was traveling to Allegheny County that day to give away more bikes and has 15 more presentations scheduled before Christmas, said the experience never gets old.

“I was once asked what I didn’t expect (from giving away devices.) I didn’t expect to have my life transformed,” he said. “I realized I was a different person because of (the children’s) joy and experience.”

LaVallee said that the best way people can help is to contact the organization at www.varietypittsburgh.org or call 724-933-0460 if they know a child who could use an adaptive bike, stroller or communication device.

Natalie Reid Miller is Community Editor and has worked at the Observer-Reporter since 2013. With fellow Observer-Reporter journalists, she won the Press Club of Western Pennsylvania’s Ray Sprigle Memorial Award for the “Under the Label” social series.