Some fifth-graders and high school students in Trinity Area School District viewed pornographic and racially inappropriate images and comments while they were taking part in an online class on Wednesday morning.

The school district notified parents that there was an apparent security breach in a fifth-grade cyber classroom at Trinity West and two virtual classrooms at the high school.

Teachers ended the Zoom sessions and collected evidence that has been shared with police and administrators.

“The ‘hacker’ got into the virtual classroom and was able to introduce offensive racial and other inappropriate comments. There is a report of an alleged pornographic image as well,” Dr. Michael Lucas, superintendent, wrote in a letter to parents.

Police are investigating, and the school district “will prosecute those found to be responsible to the fullest extent of the law,” Lucas said.

Several parents posted about the incidents on a learning co-op page on Facebook.

The district notified Zoom and wants to know how the breach happened.

The district is temporarily suspending live instruction as it continues to investigate the security breach.

Beginning Thursday, teachers will post assignments, recordings and activities in Canvas for students who are working remotely.

School board member Jim Knapp called the videos that were aired “atrocious.”

“It’s disgusting. In today’s era, with the push for social justice and all that’s going on, this is awful,” said Knapp. “But when you are using that platform, and with people being able to hack in, they’re going to try to do it.”

Lucas urged parents to talk with their children about appropriate internet use.

“Make sure your child reports anything strange or unusual to you and their teachers immediately,” he wrote.

He asked anyone with information about the cyber hack to contact their building principal or the police.

“Students and parents should know that the local authorities and Trinity staff are tracking IP addresses to identify where messages or images originated. Everyone should be reminded that this is a serious crime,” said Lucas. “We are disappointed, but we will not give up. Our teachers have worked too hard to let the criminal actions of one or two stop us from safely teaching students remotely.” 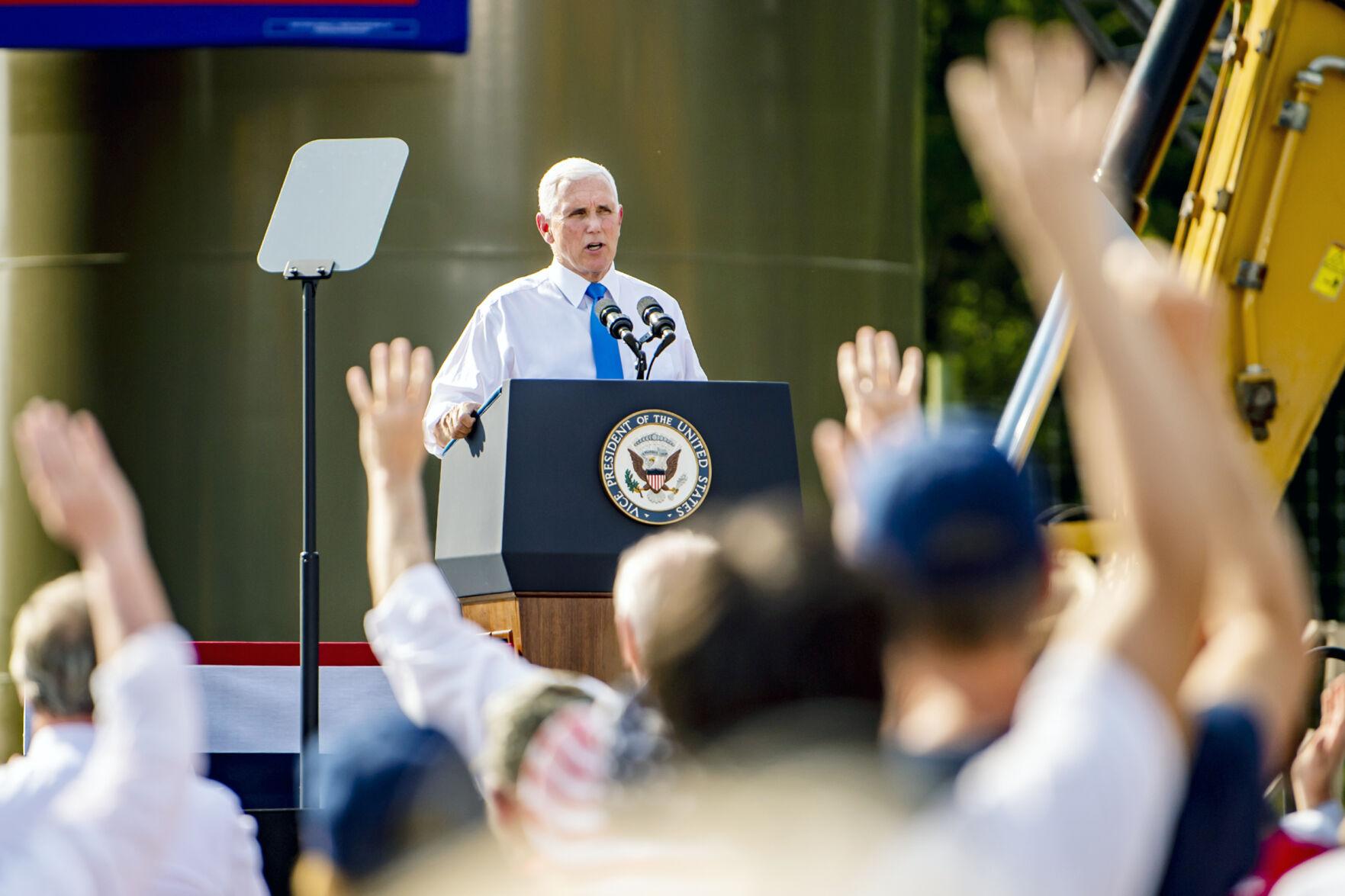 Supporters hold up four fingers as they chant “four more years” as Vice President Mike Pence speaks Wednesday during a “Workers for Trump” rally at PennEnergy Resources well site in Freedom. Pence’s latest visit to Western Pennsylvania will be followed up today by President Donald Trump’s son, Eric, coming to Washington for an event at American Legion Post 175. The president is scheduled to be in Shanksville Friday morning for the annual 9/11 remembrance at the Flight 93 National Memorial alongside Democratic presidential candidate former Vice President Joe Biden.

Citing competing political events and the security around them, the Trinity Area School District notified parents and guardians of students that instruction would be conducted remotely on Thursday.

North Franklin Township officially told Trinity officials on Tuesday that Eric Trump, son of President Donald Trump, was coming to American Legion Post No. 175, 168 Park Avenue, on Thursday for what was “expected to be a sizable political rally” for the Republican’s reelection bid.

In a letter to Trinity families, district officials said they were “surprised to learn” of Eric Trump’s appearance, which spurred what North Franklin Supervisor Bob Sabot and his wife, Sandy, called a peaceful “pro-Joe Biden rally” with social distancing and masked participants supporting the Democratic nominee “not to disrupt Mr. Trump’s visit or cause any other disruptions.”

Sandy Sabot is one of two women who represent Washington County on the Democratic State Committee.

The Trinity letter referred to groups “planning to protest in front of our high school from South Main Street to Franklin Farms Road” along Park Avenue, areas where residents and motorists are experiencing road construction and natural gas line replacement.

Bob Sabot said Wednesday afternoon that he and his wife had not yet heard from state police where the Democratic rally participants would be allowed to gather.

But with this scenario in mind, Trinity officials determined that the high school, middle school and Trinity West Elementary School students and staff would work remotely on Thursday.

Trinity North, Trinity South and Trinity East elementary schools would have no change in their schedules on Thursday with pupils from Group B of the hybrid model reporting in person as planned.

Eric Trump is scheduled to speak at 2 p.m., according to the campaign.

Union workers at Langeloth Metallurgical Co. have been on the picket line for one year.

A strike by about 80 union employees at Langeloth Metallurgical Co. marked its first anniversary Wednesday, and according to a union official, there are no indications of a rapid resolution.

Joe Avolia, vice president of United Auto Workers Local 1311, said no negotiations are scheduled, and there have been no talks since December.

Langeloth Metallurgical did not respond to a request for comment.

Avolia spoke following a rally outside the ore processing facility in the Langeloth section of Smith Township. The UAW is the only union at the plant.

Members began a work stoppage Sept. 9, 2019, over seniority rights and safety. Management and the union have had negotiations, to no avail. Avolia said the UAW took the next step in mid-April, filing unfair labor practice charges against the company with the National Labor Relations Board in Washington, D.C.

The union issued a statement Wednesday, which reads in part: “The company has conducted itself in such a manner some may consider their actions an effort to bust the union. This is something we do not want to see happen to our union now or any other union in the future.”

The statement specified that the strike started over a “disagreement over safety and seniority within the plant, not monetary issues.”

Workers – limited in number – continue to picket near the work site. Avolia estimated that about 25 UAW members participated in the rally. Morale, he added, could be better, but members remain united and determined.

“Guys are down, but they’re sticking together and going to fight it to the end,” the Hickory resident said.

He complimented the local community for its continuous support, including motorists who beep as they pass by. “You’d figure the neighborhood would be tired of honking, but they’re still honking,” Avolia said, chuckling.

State Rep. Jason Ortitay, R-South Fayette Township, attended the rally and said afterward: “It’s kind of disappointing it’s gotten to this point, a year later. We want the two sides to get together, but the company hasn’t come back to the table.”

While absolving Local 1311 of blame, Ortitay said the international union “is not taking care of” Langeloth members. “We want them to step up. These members should be taken care of like those at General Motors, Ford and other large companies.

On another matter, an Iowa firm in late July filed a debt collection case in Washington County Court against Langeloth Metallurgical over an unpaid balance of $113,111, plus interest and costs, on a commercial credit account.

Independent Can Co. of Fort Madison, a manufacturing plant, delivered to Langeloth Metallurgical several types of goods for which it claims it has not been paid as of Sept 30, 2019.

There was no response from the local firm as of Tuesday in an online court database from Langeloth Metallurgical, nor had a court date been scheduled.

Old Main on the campus of Washington & Jefferson College

Washington & Jefferson College on Wednesday said 26 students have been asked to return home for violating its COVID-19 safety guidelines since classes began Aug. 24.

Meanwhile, two Washington County magisterial offices were also closed Wednesday because of concerns about the novel coronavirus, but one reopened that afternoon.

The county courthouse remained open to the public but was deep-cleaned after District Attorney Gene Vittone notified Court Administrator Patrick Grimm that a member of the prosecutor’s office tested positive for the virus.

The college did not reveal what rules were broken to take the actions, its spokeswoman said. They were not suspended from the college in Washington, but told to resume their coursework remotely.

Resident students had signed a safety pledge to follow the school’s COVID-19 guidelines.

The rules include completing daily screenings before attending class or work; refraining from hosting guests who are not on campus; and limiting travel away from campus to essential reasons, including internships and work.

Students also completed a 10-day quarantine when they returned to campus.

In another part of the county, the office of Charleroi area District Judge Eric Porter was shuttered Wednesday morning, but reopened later in the day because a possible exposure to coronavirus was ruled out by a negative test, Grimm said.

The office of Washington District Judge Robert Redlinger was also closed Wednesday because of exposure to a positive case of the virus.

Grimm on Wednesday afternoon said the magisterial office in what is still referred to locally as the Millcraft building at West Chestnut and North Franklin streets could reopen Thursday or Friday, depending on how long a chemical odor from the deep-cleaning process might linger.

Vittone on Wednesday afternoon learned of a second positive test among his staff of 33. The district attorney’s office had just last month begun a long-awaited move across South Main street to the Caldwell Building, but staff members’ jobs regularly take them back and forth to the courthouse.

“We’ve deep-cleaned areas at the courthouse due to issues at the DA’s office,” Grimm said Wednesday afternoon. A thermal temperature scanner has replaced hand-held thermometers that had been used to screen those entering the justice center from West Cherry Avenue.

The developments came as the number of novel coronavirus cases began to climb again in Pennsylvania. The state Health Department reported 931 new cases of the virus Wednesday and 14 new deaths, nine of which involved residents of Allegheny County.

Bogen also said a free COVID-19 testing site will be opening Tuesday in McKeesport over concerns there isn’t adequate testing in the Mon Valley. The details on registering for the tests will be available Friday. The tests at 455 Industry Road will not be limited to residents of Allegheny, and the results will be known within 48 hours, Bogen said.

Meanwhile, Fayette County recorded a new COVID-19 death Wednesday, taking the death toll there to seven. The county also added eight new cases of the virus to its total of 722 since March.