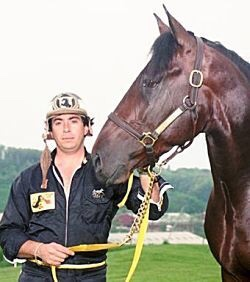 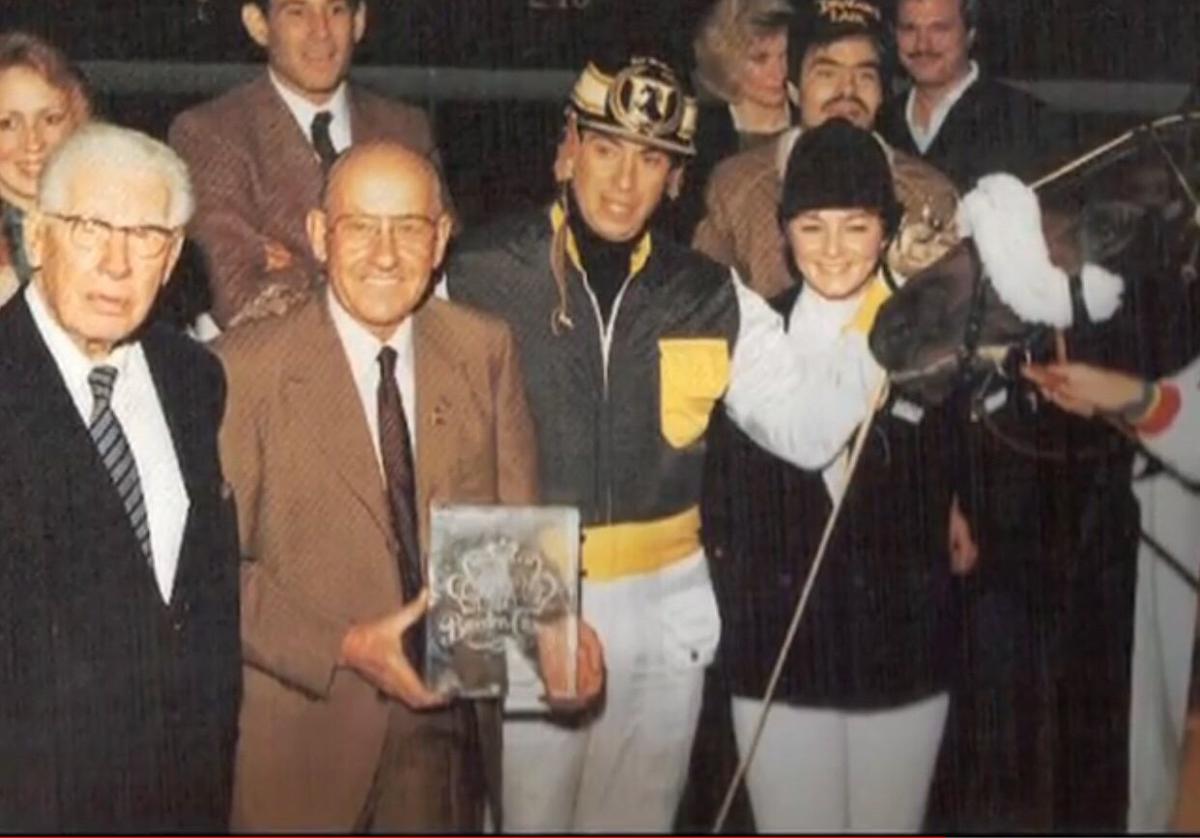 From left, Art Rooney, Delvn Miller and Jeff Mallet stand with Dragon’s Lair in the winners’ circle after defeating Nihilator in a 1984 Breeders Cup final.

From left, Art Rooney, Delvn Miller and Jeff Mallet stand with Dragon’s Lair in the winners’ circle after defeating Nihilator in a 1984 Breeders Cup final.

It was Freddie at Wembley. Tiger at Augusta. Brady in the Super Bowl. Ali in Zaire.

That was the kind of performance Dragon’s Lair put forth 35 years ago this month in upending the great and undefeated Nihilator in the initial Breeders Crown 2-year-old Pace at The Meadows – one of the greatest races and upsets in harness racing history.

It was David versus Goliath.

“It was more like Rocky and Apollo Creed,” said trainer Mark Goldberg, who provided preracing insight and advice to his friend Jeff Mallet, owner, drive and trainer of Dragon’s Lair. “Nobody thought Rocky could beat Apollo Creed, no matter the circumstances.

“Jeff made up his mind that Dragon’s Lair would not be outworked in pursuit of the Breeders Crown championship. We talked about it every day over lunch in the month leading up to the race, prepping Dragon’s Lair for two heats of racing, which isn’t really done anymore. Jeff was determined for Dragon to run two great heats. They trained the horse harder so he could do it. It made all the difference.”

The Breeders Crown, which began in 1984, is a yearly series of harness races in the United States and Canada, covering each of the sport’s 12 traditional categories of age, gait and gender. The series was initiated by the Hambletonian Society, promoters of the Hambletonian Stakes, in 1984 to enhance the Standardbred breeding industry and to promote the sport. For the first 15 years, races were contested at tracks around North America. After a 1998 appearance at the then-new Colonial Downs near Richmond, Va., the series has rotated between a variety of tracks.

The first Breeders Crown for 2-year-old pacers was appropriately staged at The Meadows.

Nihilator entered the race undefeated with 11 consecutive victories. The hype was great, and the performance was better.

Owned by Louis Guida, and trained by the Houghton Stable, Nihilator was well known across the country.

Dragon’s Lair was the local horse owned, trained and driven by Pittsburgher Jeffrey Mallet. The horse entered the Breeders Crown having won 10 of 12 races, mostly known in Pennsylvania but not nationally. However, Dragon’s Lair was highly thought of and expected to give Nihilator a stiff challenge.

“Not only was this a great horse race, but a dramatic moment in harness racing,” said legendary track announcer Roger Huston. “This was towards the beginning of the Breeders Crown. To have a major upset such as that in such a big event at the Meadows and a local horse win made it that much more special.

“All year long, I built up Dragon’s Lair as the horse from The Meadows. In some appearances in New York and on some talk shows, I always talked about Dragon’s Lair and made the statement that I thought he would win the Breeders Crown.

Mallet was not about to back down. He believed in Dragon’s Lair and let just about everyone know how he felt.

“The Meadows was our home track and I knew that in order to be competitive in the race, we had to have Dragon’s Lair equipped to go two heats and finish fifth or better in the elimination,” Mallet said, “And be better to come back and win the final.

“I knew that since the race would be in October, that it would get cold – a lot colder – into the night. For about four weeks leading up to the race, I kept Dragon in the paddock after a race and would go an additional dash in about 2:02.1 so he would be equipped and ready. I thought that was going to help us immensely in going two heats.

“I admired Billy Houghton so much, a great, great horseman. I think they had been given the advice that the race was (Nihilator’s). They came out, worked out a mile in about 2:30 and Billy told the groom to put the horse away. I thought they made a big mistake. I thought we could win the race.”

The atmosphere at The Meadows was galvanizing. The ballyhooed Nihilator didn’t disappoint, winning his elimination in world-record time and passing Dragon’s Lair, which led throughout the race, right before the wire.

That gave Nihilator the rail for the final and Pershing Square the No. 2 hole and Dragon’s Lair the 3 spot.

The odds looked stacked against Dragon’s Lair being able to pull off an upset because the Houghton stable seemed to have the ability to strategically control the race. A third Houghton stable horse, Flight of Fire, was in the final.

From the outset, it was apparent, driver Tommy Houghton went for the top with Pershing Square, hoping for Dragon’s Lair to push for the lead in the opening quarter or drop in second, which would have given Nihilator a huge advantage.

The strategy was to sap Dragon’s Lair’s energy if Mallet elected to try going to the top in an effort to pass Pershing Square in the first quarter.

Goldberg said Mallet really had no choice if he wanted to win the race.

“An amazingly fast quarter for that era,” Goldberg said.

Surely, Dragon’s Lair would be all out at this pace by the end of the race.

Mallet backed the horse off and still held the lead at the half, going 30 seconds in the second quarter.

“That was big,” Mallet said. “I was able to give him a bit of a breather and no one challenged. Mark told me I would have to make a decision out of the gate. He knew I was going to try and win. I wasn’t going to take a seat and be satisfied with a check.

“I figured it was my horse and my track and this was my moment. I really thought Dragon would win the race and I didn’t think anyone would take it away from me.”

Dragon’s Lair electrified the nearly 8,000 on hand by holding the lead through three quarters. Just after the half, driver Bill O’Donnell moved Nihilator to the outside, but he never got close to passing Dragon’s Lair.

As the field, which also included Broadway Express, Marauder, Warm Kessel and Witsends Wizard turned for home, Dragon’s Lair was in command.

“I had a lot of horse,” Mallet said. “Right around the ¾ pole I tapped him with my whip. I got him whipped up a bit and he started pulling away from Pershing Square.

“We won the race and it was a big deal. There were a lot of people who came just to watch Dragon’s Lair. A lot of people were happy because I think it gave other horsemen hope.

Mallet, by his own admission, was boastful in the winner’s circle. He rubbed some of Nihilator’s people the wrong way.

Goldberg said the reaction in the paddock was amazing and surprising.

“He beat the unbeatable,” Goldberg said. “Jeff wasn’t the most popular person (at The Meadows). A lot of folks viewed him as a rich kid. He wasn’t one of the struggling horsemen.

“I have won hundreds and thousands of races. I was smiling ear to ear. Jeff waved for me to jump on the sulky and using the head pole like a baton I was pumping my arms. It was mayhem, an amazing scene. It was a great moment for Jeffrey.”

For Nihilator, it was the first of a couple disappointments at The Meadows. As a 3-year-old, he returned to The Meadows for The Adios in 1985. After winning an elimination, he was defeated by Marauder in a second elimination.

Guida and Nihilator’s handlers pulled out of the final and Marauder won The Adios in a walk over.

Dragon’s Lair never had the chance to race against Nihilator again.

Guida purchased a significant interest in Dragons Lair. While Guida’s investment appeared to be a way of protecting his own interests, Dragon’s Lair got sick and his 3-year-old season was ruined.

To this day, no one is quite sure what caused the illness.

Neither Nihilator nor Dragon’s Lair were successful stallions, with the exception of one significant colt by the name of Dragon Again. The son of Dragon’s Lair took his place in history as the sire of Breeders Crown winner, and richest pacer of all time, Foiled Again – who completed his career Jan. 1 at The Meadows with 109 wins and in excess of $7.6 million in career earnings.

“Dragon’s Lair, as a 2-year-old, gave me the greatest moments of my life in racing,” Mallet said. “It was an unbelievable moment winning the Breeders Crown with him. It would have been a tough act to follow. Beating a horse like that was such a big deal. Honestly, I never thought I could top that.”