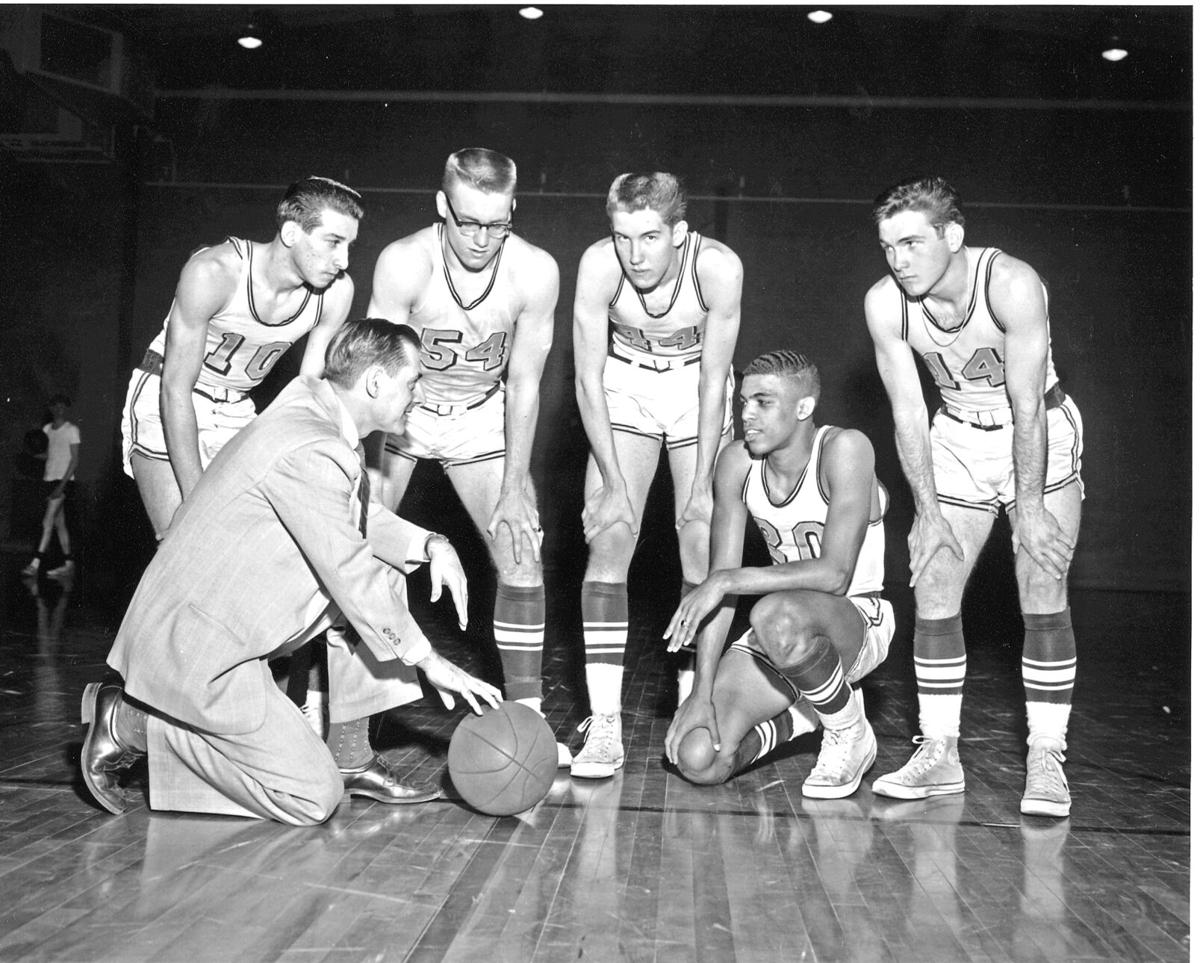 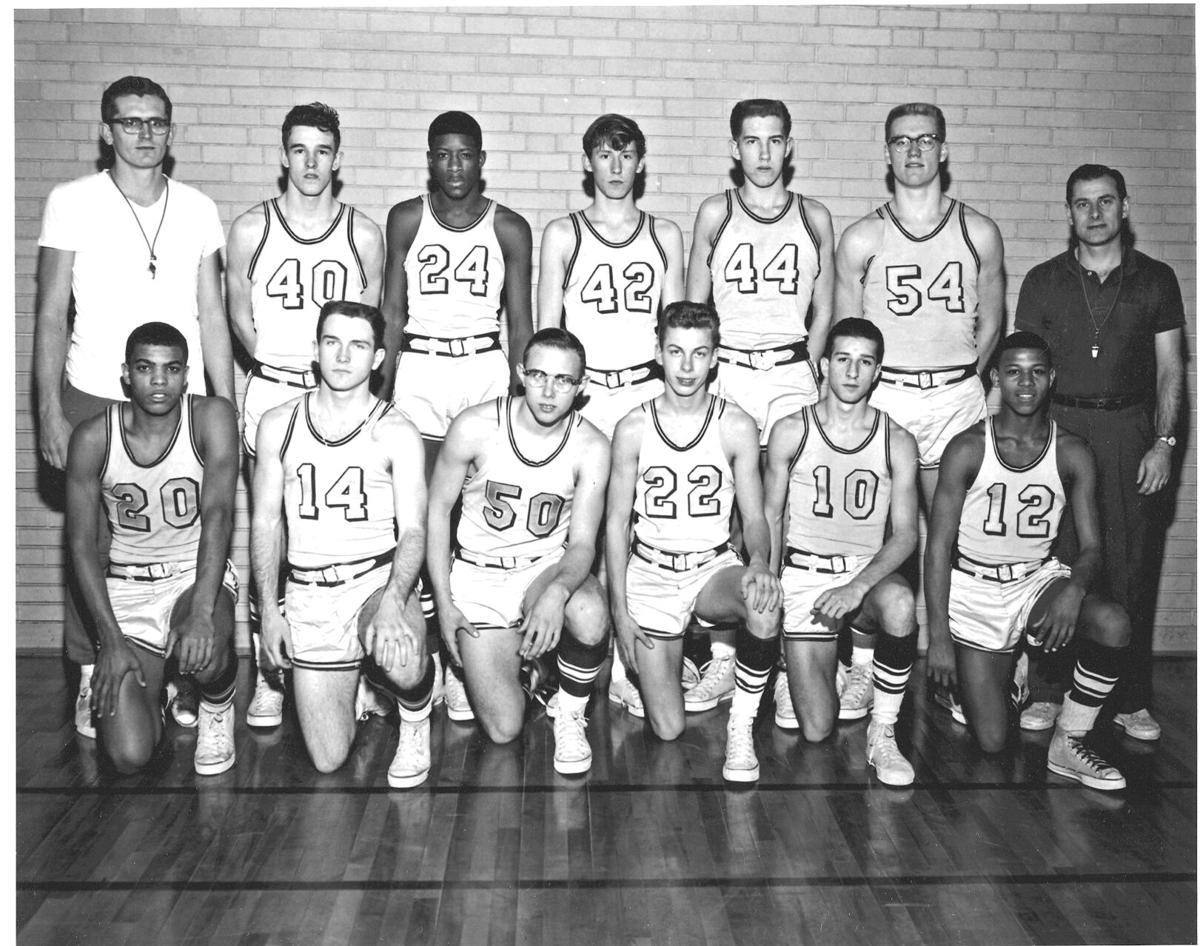 The 1960-61 Fort Cherry basketball team, under head coach Ed Hepe, back right, had a 25-4 record and won WPIAL and PIAA Class B championships. 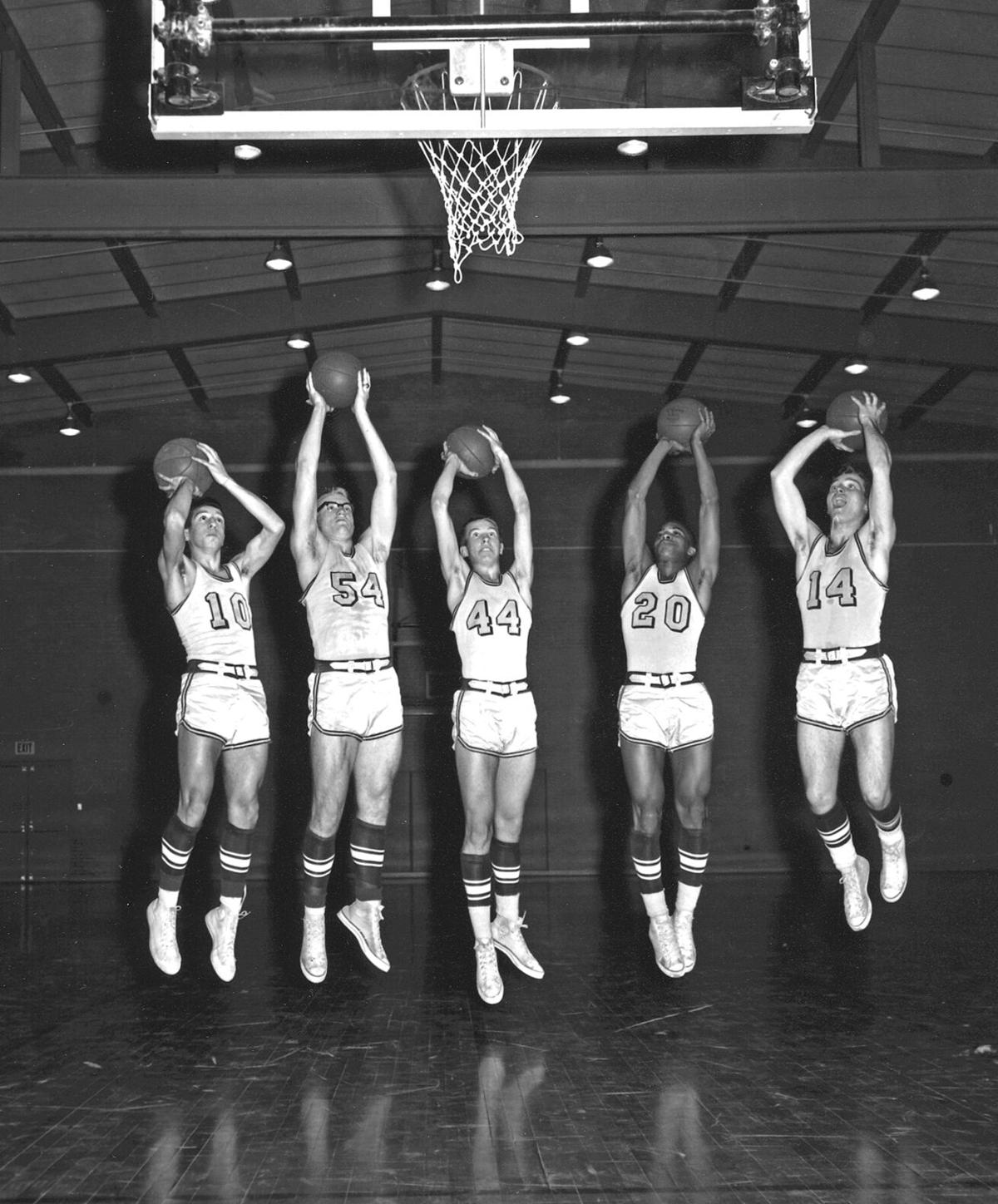 The 1960-61 Fort Cherry Rangers routed Wampum to win the WPIAL Class B championship then defeated St. Clair for the PIAA title, the first won by a team from Washington County. 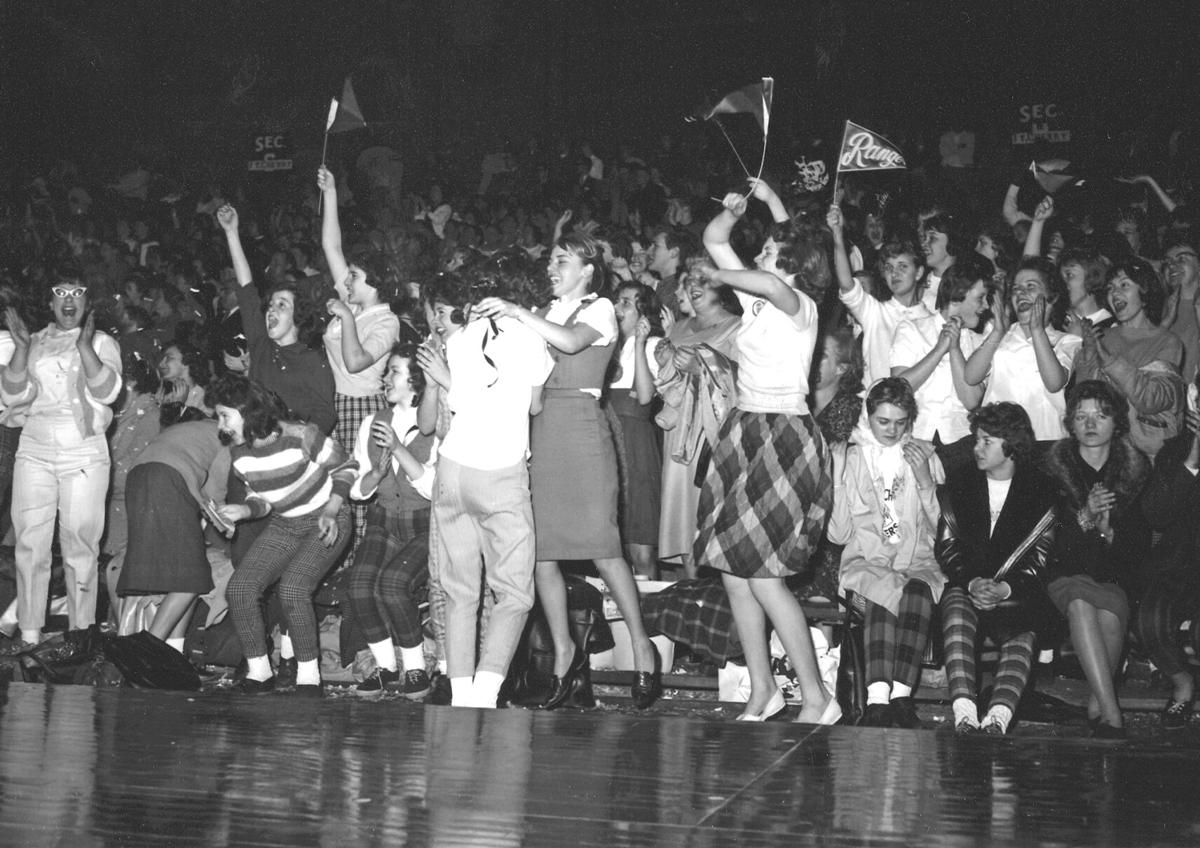 The 1960-61 Fort Cherry basketball team, under head coach Ed Hepe, back right, had a 25-4 record and won WPIAL and PIAA Class B championships.

The 1960-61 Fort Cherry Rangers routed Wampum to win the WPIAL Class B championship then defeated St. Clair for the PIAA title, the first won by a team from Washington County.

The WPIAL basketball playoffs began Saturday. They are open tournaments — the first of the kind since 1984 — and the 121 boys and 109 girls teams involved all have the same goal: get production from everybody who is called upon and play their best brand of team basketball at the most important time of the season.

In other words, play like a team from the northwest corner of Washington County did 60 years ago.

That was when Fort Cherry won both the 1961 WPIAL and PIAA Class B boys championships.

It was the first state championship won by a boys basketball team from Washington County. There have been only three since – Washington in 1984 and 1986, and Ringgold in 1995. Those numbers make what Fort Cherry accomplished in 1961 seem even more remarkable.

Terry Holder, who was a standout guard on that Rangers team, still thinks back to that season and is amazed by how far the Rangers exceeded their goals and expectations.

“No, we didn’t expect anything like that. We were in there to win the section and see what happened after that,” said Holder, who lives in the Atlanta area.

Just getting to the playoffs was going to be a difficult challenge for Fort Cherry. The school was in only its second year of existence after the jointure of McDonald, Hickory and Midway high schools.

“Those three towns hated each other,” Holder recalled. “As players, we had to put the hard knocks and rubs away. There were still some confrontations in the locker room, I’ll admit that, but once we started winning everything went away.”

Holder says the Rangers started winning big because they had the right coach. Ed Hepe, who had been the head coach at McDonald, was named Fort Cherry’s first basketball coach. His assistant was Leo Gispanski, who had been the coach at Hickory prior to the jointure. They had the difficult task of blending former bitter rivals into a tight group of teammates who would play together.

And by playing together the Rangers won big and the communities in the Fort Cherry district put aside their rivalries and came together to cheer the team that would do big things.

Fort Cherry lost non-section games to Montour, Canon-McMillan and Carnegie – all schools in larger classifications – and cruised through Section 15-B until the final league game when the Rangers were upset by Union, now known as Burgettstown.

Fort Cherry entered the WPIAL playoffs with a 19-4 record and received a first-round bye. The Rangers’ first postseason test was a difficult one, against Bentleyville, which was two years away from winning a WPIAL title. Bentleyville, behind 26 points from Bruce Gibbs, had pulled out a 49-48 win over Aspinwall in the opening round.

Holder, a 5-8 guard, scored 28 points, and 5-10 guard Paul Brown added 11, as Fort Cherry edged Bentleyville 54-49 in a game played at Mt. Lebanon. Bentleyville, behind Carey Moore’s 18 points, cut a 12-point fourth-quarter deficit to two but was unable to score the tying basket. Brown’s basket with 16 seconds left sealed the win for Fort Cherry.

It was on to the Pitt Field House for the semifinals against a tall Trafford team that had a height advantage on the Rangers’ inside duo of 6-3 Rich Hallam and 6-2 Marty Schottenheimer, who would go on to fame in football.

Fort Cherry overcame an early seven-point deficit with the help of its trademark full-court press. Holder made a key basket with 20 seconds remaining that gave the Rangers a 55-52 victory. Holder finished with 19 points and Schottenheimer scored 12.

The Rangers’ opponent in the WPIAL final was Wampum, the defending WPIAL champion and a team Hepe was all too familiar with. Hepe, who was a talkative guy to say the least, had some good teams at McDonald that couldn’t get past Wampum in the WPIAL playoffs.

Most didn’t give Fort Cherry a chance.

“A paragraph in one Pittsburgh newspaper asked what some farmers from Fort Cherry were doing still playing. As it turned out, these farmers did pretty well,” Hepe told the Observer-Reporter in 2004.

“We warmed up at the Pitt Field House and then returned to the locker room. As we were returning to the court, Marty Schotteneheimer and I stopped Coach Hepe and told him we’re going to win it for him,” Holder recalled. “He said, ‘OK, boys, let’s go get ’em.’”

Holder knew what a win over Wampum would mean for Hepe, and Schottenheimer held a special place for his coach. Midway through the season, when Schotteneheimer was struggling in the transition from football to basketball, he told the coach that he wanted to quit.

Hepe wouldn’t hear of it.

Against Wampum, which was led by Ron Allen, the brother of former major league standout Richie Allen, Holder scored, Schottenehimer rebounded and the Rangers pressed Wampum into a sea of turnovers.

The Rangers led 19-11 after one quarter and rolled to an impressive 77-56 victory that netted the WPIAL Class B championship.

“We ran them off the court,” Holder says proudly.

Holder finished with 31 points, Brown had 15, Schottenheimer 11 and Hallam 10.

In the first round of the state playoffs, Fort Cherry avoided an upset, holding off Marion Center, 60-59.

In the semifinals against Cochranton at Farrell High School, Fort Cherry trailed by nine points in the first quarter but used a 16-0 run to take a halftime lead. The Rangers pulled away in the fourth quarter, winning 71-44 behind 18 points from Holder and 17 from Hallam.

The opponent in the state championship game, also played at the Pitt Field House, was St. Clair, from Schuylkill County. The Saints were 23-2 and had a 19-game winning streak but Fort Cherry’s pressure defense was too much as St. Clair managed only 15 points in the second half. The Rangers won, 51-41, as Holder netted a game-high 20 points and Hallam had 15.

“By midseason we started to mature,” Holder said. “We realized that we had something then. We had five or six guys who played almost like one. We were a team. It was a total team effort with one of the best coaches in Western Pennsylvania. It goes back to coaching. Ed Hepe was the one who was able to put it all together. Our press, we just wore out other teams with it.”

The 1961 Fort Cherry state championship team was inducted into the Washington-Greene Chapter of the Pennsylvania Sports Hall of Fame in 2017. Holder says he still thinks about that historic season.

“I have scrapbook from that year that you wouldn’t believe. It’s fun to get nostalgic, sit down with a cold beer and look at the book. It brings back a lot of good memories,” he said.

Maybe some local basketball team will make similar memories in the coming weeks.

Sports editor Chris Dugan can be reached at dugan@observer-reporter.com.