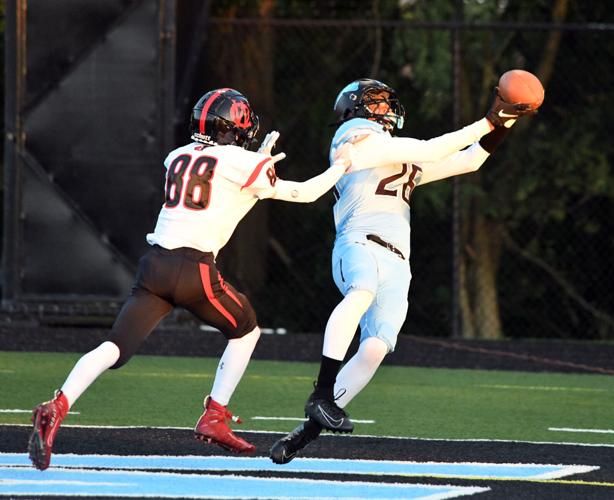 Brandon Patterson pulls in a Davoun Fuse pass in the back corner of the end zone during a game this season against Waynesburg. The Prexies will likely grab a playoff berth if they defeat Frazier tonight. 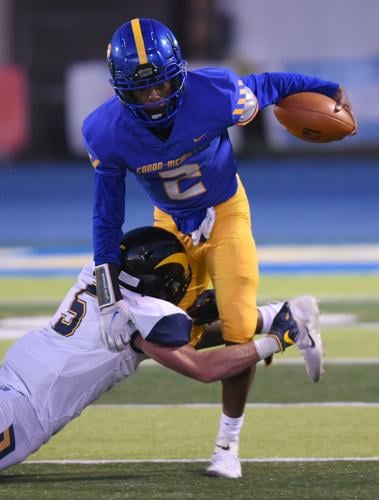 Canon-McMillan quarterback Deuce Lyons attempts to elude the grasp of Alexander Tecza during the Big Macs’ game against Mt. Lebanon. Canon-McMillan and Mt. Lebanon could be part of a messy playoff situation in the Class 6A Quad County South Conference.

Brandon Patterson pulls in a Davoun Fuse pass in the back corner of the end zone during a game this season against Waynesburg. The Prexies will likely grab a playoff berth if they defeat Frazier tonight.

Canon-McMillan quarterback Deuce Lyons attempts to elude the grasp of Alexander Tecza during the Big Macs’ game against Mt. Lebanon. Canon-McMillan and Mt. Lebanon could be part of a messy playoff situation in the Class 6A Quad County South Conference.

The strangest and most unique football regular season in WPIAL history comes to an end tonight.

The shortened seven-week season reaches its finish line with many playoff berths still to be determined, and some teams not clear about exactly what they need to happen tonight to qualify for the playoffs. That’s because, during this pandemic-impacted season, the WPIAL changed its playoff formats.

To review, the WPIAL has given its 12-member football steering committee the power to select postseason participants in conferences in which COVID-19 situations have caused games to be canceled. In classifications that have wild-card playoff qualifiers, the steering committee will select the wild cards, unlike in the past when a point system was used to determine wild cards. The WPIAL also changed the playoff format for Class 2A so that now only the conference champion gains automatic entry into the postseason along with four wild cards to be chosen by the steering committee. More than one wild-card team can come from the same conference. That is also new.

With those changes in mind, here are five things to watch for tonight:

1. Win and you’re in, or not?: The Frazier at Washington game in the Century Conference appears to have all the makings of a winner-take-all contest with the winner moving on to the postseason and the loser missing the playoffs. Both teams are 4-1 in the conference and 4-2 overall. The winner will finish in second place behind McGuffey, but there is no guarantee the winner will qualify for the playoffs because of the new wild-card format in Class 2A.

However, if Washington wins, then it’s hard to think of a scenario in which the Prexies wouldn’t secure a wild-card berth. Washington’s only losses are to Class 4A Trinity and by one point to McGuffey. Throw in Washington’s tradition and past postseason success – the Prexies were in the WPIAL title game last year – and even head coach Mike Bosnic would have to be optimistic and confident about his team’s chances for selection if it defeats Frazier.

A playoff berth for the Commodores won’t be easy (no pun intended). Frazier has a 42-point loss to McGuffey – Frazier’s outstanding running back Kenny Fine did not play in that game – and a 16-point loss to Ligonier Valley, one of the teams it might be battling for a wild card. In other words, Frazier needs to win, and possibly win impressively.

2. Big Macs and a side of playoffs – The playoff race in Class 6A, where COVID-caused cancellations have been plentiful, has all the makings of a mess.

Only four teams will make the playoffs in the Quad County Conference and the steering committee will likely be choosing them. North Allegheny (4-0) and Seneca Valley (4-1) seem to be in good shape but there is a possibility of two- or three-way ties for the final playoff spots. What would make the decision a headache is the following scenario tonight: Canon-McMillan (2-3) beats Norwin (1-5), Seneca Valley (4-1) defeats Mt. Lebanon (3-2) and Baldwin (1-2) upsets Central Catholic (3-2).

The best scenario for the Big Macs is to handle Norwin and get help from Seneca Valley and Central Catholic.

3. Bid stealer – Carmichaels entered last week as the only 5-0 team in the area. Three turnovers in the red zone against California later and the Mikes are 5-1 and still not locked into a playoff berth in Class A. California’s 49-20 win over Carmichaels Saturday night gave the Trojans the Tri-County South Conference title. Carmichaels is in second place, one game ahead of Avella (4-2). The Mikes play at Avella tonight. With an upset win, the Eagles can grab second place and a playoff berth, sending the Mikes into consideration for one of the two Class A wild cards, which seem likely to be ticketed for the third-place teams in the Big Seven and Eastern Conferences.

4. Passing fancies – Second place in the Class 5A Allegheny Six Conference and an automatic playoff berth is on the line when Upper St. Clair plays at South Fayette. Both teams are 3-1 in the conference and 4-2 overall. The loser will have to qualify as a wild card. We know what’s on the line, just not when the game will end. With South Fayette quarterback Naman Alemada (1,288 passing yards) and USC’s Ethan Dhlem (1,273), this game could take three hours and 80 passes to finish.

5. Can Zuzak win the scoring title? – Let’s face it. The Tri-County South Conference is a lot like college football’s Big 12 Conference. There are a lot of yards to be gained and points to be scored. Defense is often an afterthought. That doesn’t mean what California senior running back Jaeden Zuzak has accomplished shouldn’t be considered remarkable. Zuzak leads the WPIAL in both rushing (1,366 yards) and scoring (154 points). He will not get to add to those totals tonight. California will receive a forfeit from Monessen and the Trojans opted not to schedule a game to fill the open date.

It’s unlikely Zuzak will win the regular-season rushing title because he leads Teddy Ruffner of Mars by only 37 yards and Shenango’s Reis Watkins by 140 yards. Zuzak, however, does have a chance to lead the WPIAL in scoring during the regular season because he has a 28-point edge over Watkins, who closes the season at Rochester (5-1). What makes Zuzak’s numbers all the more impressive is he played in only five games – two fewer than his rivals.

Sports editor Chris Dugan can be reached at dugan@observer-reporter.com.