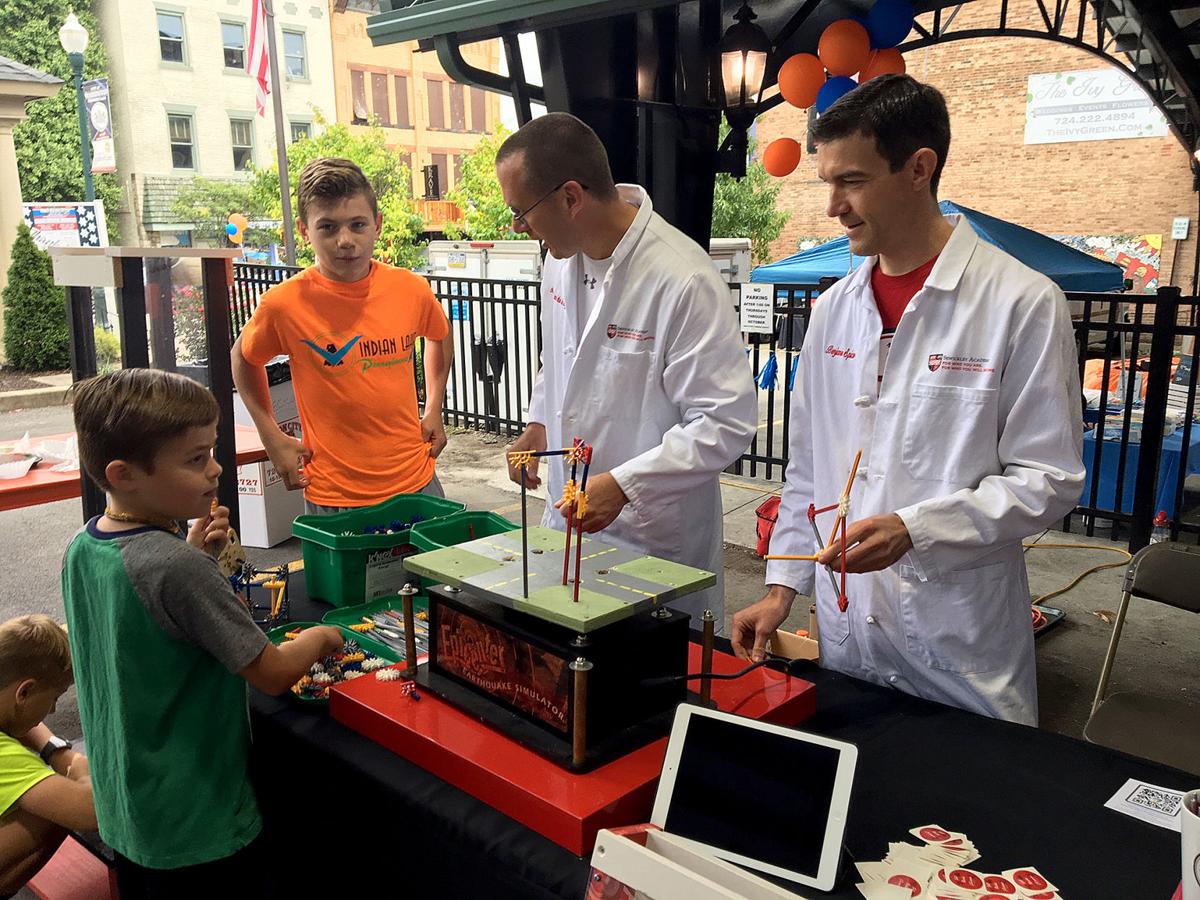 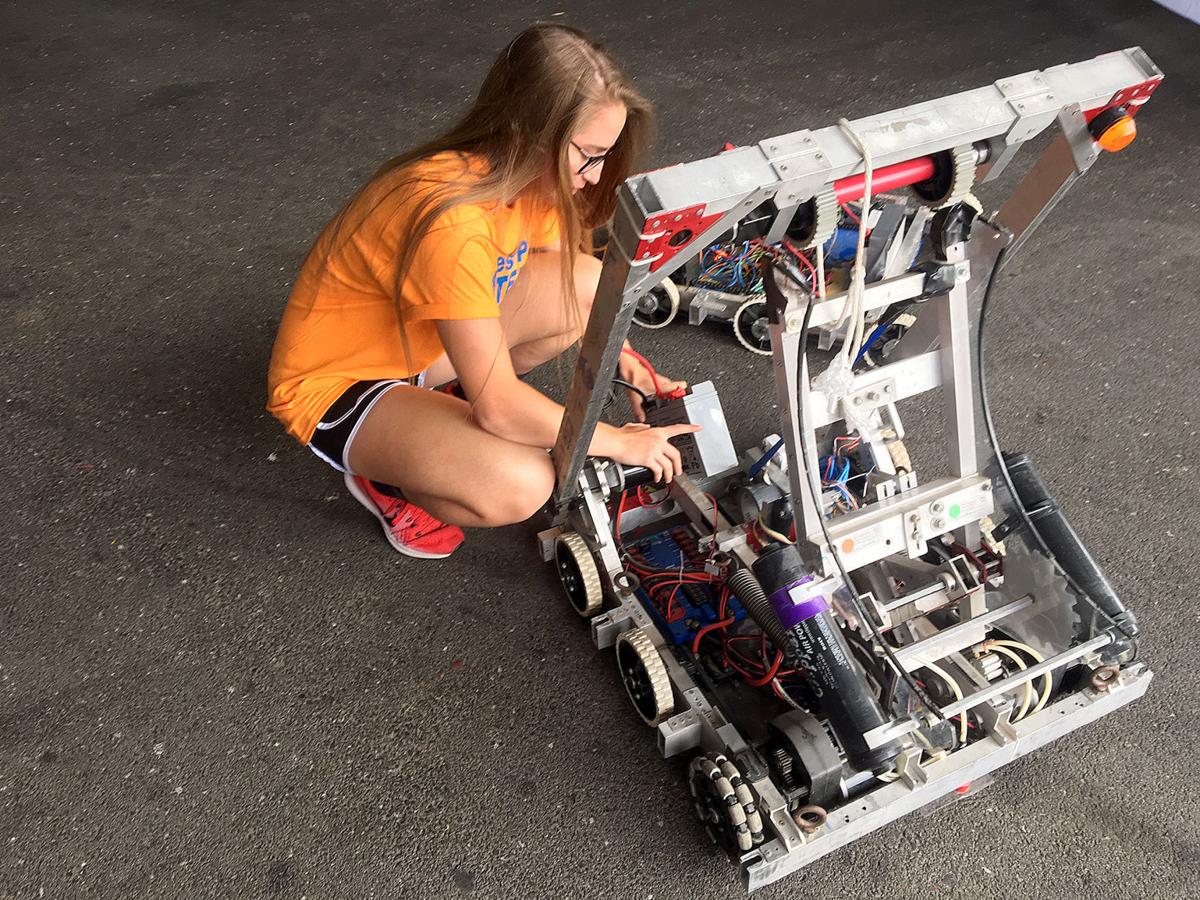 Spencer Putnam of Washington, a senior at Bishop Canevin High School, has been building robots for three years. 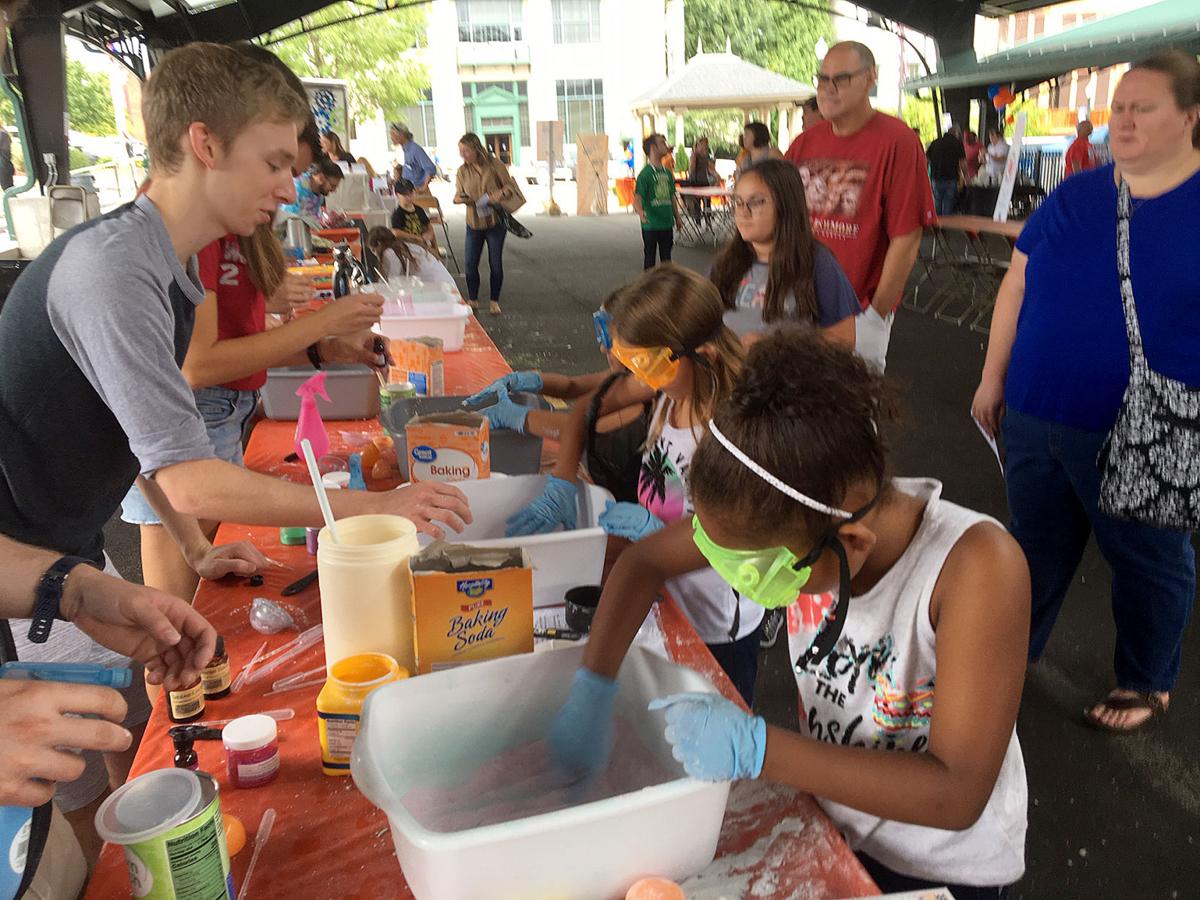 Jaelynn Dewitt, 8, and cousins Brynn and Skye Larkin, who are sisters, make fizzy bath bombs at Southwest Pennsylvania STEM Fest at the Community Pavilion on South Main Street in Washington.

Spencer Putnam of Washington, a senior at Bishop Canevin High School, has been building robots for three years.

Jaelynn Dewitt, 8, and cousins Brynn and Skye Larkin, who are sisters, make fizzy bath bombs at Southwest Pennsylvania STEM Fest at the Community Pavilion on South Main Street in Washington.

Kelly Hunt was having a grand day with three granddaughters. The kids were having an even better time.

“They’re making bath bombs,” she said, beaming as the girls – donning goggles – produced the fizzy mixtures and dropped them into water.

Hunt said she had talked science with Jaelynn DeWitt, 8, a third-grader in the Beth-Center schools, and sisters Brynn, 8, and Skye Larkin, 6, of the Trinity district. Grandma is director of the Small Business Administration’s Pittsburgh office, and thus has a keen appreciation for the workaday world. So she advised them that science can be a bona fide career avenue and brought them to the Community Pavilion in Washington on Saturday morning.

“I thought this would be a good opportunity for them to see this firsthand,” said Hunt, a Centerville native and Beallsville resident. “Robotics also is a big interest of ours. We’ve been encouraging the girls to have an interest in engineering and sciences. The hands-on part makes it so nice.”

She and the three kids were participating in Southwest PA STEM Fest, a first-time event for kindergartners through 12-graders from Washington, Greene and Allegheny counties. STEM is an acronym for Science, Technology, Engineering and Math, disciplines that are ingrained in school curriculums and are the backbone of many businesses.

With manufacturing jobs expected to soar in the region, there is a heightened awareness of STEM opportunities.

Educators and corporate professionals oversaw interactive and informational booths throughout the pavilion’s two levels, providing expertise and enlightenment through ventures ranging from bath bombs to robots.

“We’re trying to inspire and educate, trying to get kids interested in STEM,” said Christine Coyle, coordinator of the festival and owner of What About Steam LLC. Coyle, a Washington resident, said she and her committee worked on this endeavor for about a year and completed it “a little over” their $10,000 budget. Coyle said the pavilion “is a nice central space,” so the group went for it.

Washington & Jefferson College professors, high school teachers and business officials were among the instructors at an event that began around 11 a.m. and wrapped up five hours later. Adric Waters, 9, a third-grader from Canonsburg, was enamored early on by demonstrations by Ben Spicer and Jon Riddle, science teachers at Sewickley Academy.

Adric’s mother, Michele, a former teacher in Maryland, was impressed.

“It’s very hands-on, which encourages children to think critically, outside the box, and maybe exposes them to different things they haven’t experienced,” she said.

The Sewickley instructors were aided by Riddle’s son, Wes, 13, who likewise enjoys science. “He is curious about things,” his father said, chuckling. “He’s shown more interest recently in changing out engines of small mini-bikes. He knows a lot about it.”

On the lower level, Spencer Putnam of Washington was practicing one of her specialties – beyond academics, that is. She was maneuvering robots along with other members of her Titanium Titans robotics team, based in Washington County.

“I’m on the building side of these,” said Putnam, a senior at Bishop Canevin High School and daughter of city Mayor Scott and Cheryl Putnam. She has been making them for three years. Putnam plans to major in aerospace engineering in college.

Titanium Titans bots were a hit among visiting students. And so was STEM Fest.