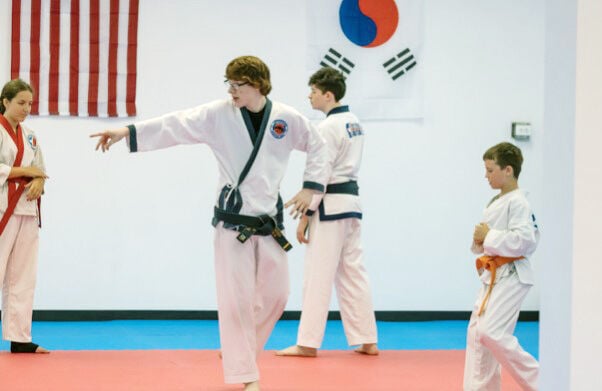 Noah McCracken, 15, has 35 to 40 students at Excel Martial Arts in Tanger Outlets. 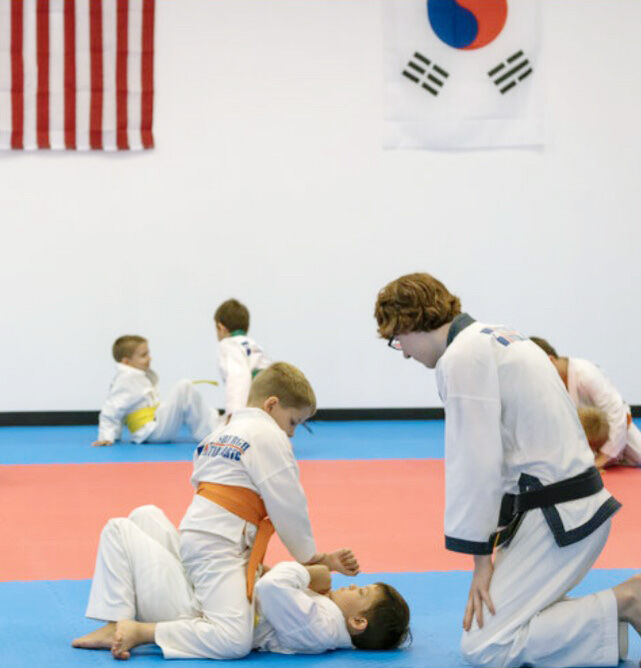 Noah McCracken, 15, has participated in karate for more than half of his life. He is now an instructor as well. 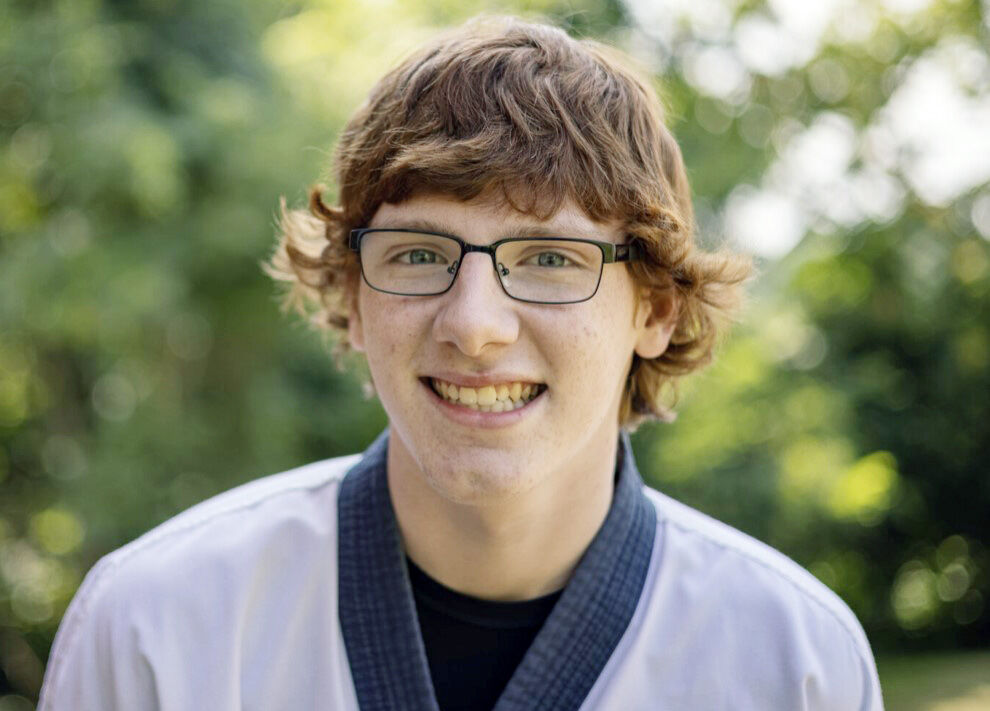 Noah McCracken is a sophomore cyber school student from South Strabane Township – and possessor of a black belt. 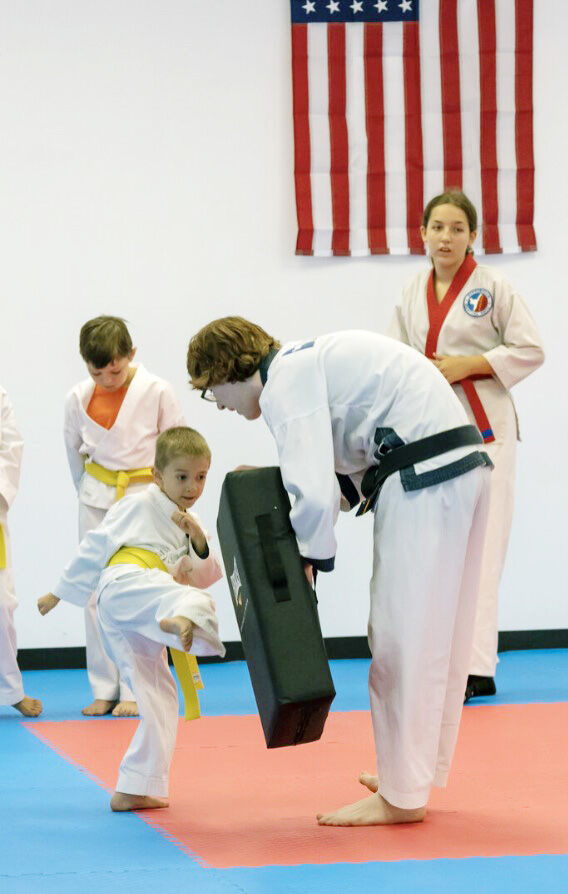 Noah McCracken, center, gets a kick out of being a karate instructor.

Noah McCracken, 15, has 35 to 40 students at Excel Martial Arts in Tanger Outlets.

Noah McCracken, 15, has participated in karate for more than half of his life. He is now an instructor as well.

Noah McCracken is a sophomore cyber school student from South Strabane Township – and possessor of a black belt.

Noah McCracken, center, gets a kick out of being a karate instructor.

Noah McCracken has been passionate about karate since he first stepped into a dojo, barefooted, eight years ago.

He has belted his way to black belt, the highest level in that martial arts discipline. The South Strabane Township resident is a keen competitor, to be sure. Now he is developing into a keen instructor and business leader as well.

With ample assistance from his father, Matt, Noah has launched a karate school – Excel Martial Arts – at Tanger Outlets. The studio opened Aug. 16 in a vacant space previously occupied by Easy Spirit, a women’s shoe store that closed a few years ago following an acquisition.

Finding that location – actually, any location – was a necessity in the teenager’s view. He had been participating in and teaching classes at Chartiers Township Volunteer Fire Department, through Pittsburgh Martial Arts. But the sessions had to be halted following a tragic set of circumstances.

Brian Ward, who had merited the title “Master Ward” – a “super-fit” man, according to Matt – experienced a stroke in February.

“Noah had been teaching with Master Ward for several years,” Matt McCracken said, and “kept the school going through June.”

That wasn’t an easy endeavor, especially for a 15-year-old and a father with no background in running a martial arts program.

“On the Monday that I got the call on Master Ward, it was hard,” Noah said. “We decided we’d close for a week, but no one knew what to do. We had to figure out how to run classes. It was chaos the first two or three weeks, then things started to fall into place.”

Ward, who is recovering, closed the school, but Noah wanted to continue the program.

“I enjoyed it and the kids were having fun,” he said.

So father and son started to shop around for a new venue, and found one, appropriately, at 2200 Tanger Blvd., Suite 985.

Because he is an adult and the youngest of his five children is not, Matt McCracken assumed many of the responsibilities of this new business. Not only is the school in his name, “I had to get insurance, an LLC, tax identification numbers – a lot things we had no experience with. We did a lot of research during the summer,” he said.

Matt, a radiation therapist for UPMC Hillman, and Noah, a cyber school sophomore with Pennsylvania Virtual Charter School, launched Excel Martial Arts in mid-August – with help from their friends at the mall and the karate community.

“The Tanger folks were very supportive in helping Noah get the school underway,” Matt said. “Noah also got a lot of support from parents whose kids were in the program, encouraging him to keep it going. One helped to build the website, another helped with the logo.”

Noah is now teaching 35 to 40 students at Excel, which has instructional hours every day except Sunday. Kickboxing is part of the equation as well. One issue facing the McCrackens now is a supply-chain-related shortage of uniforms for the students.

Tanger, in turn, has a high regard for the two McCrackens who are running the show at the dojo.

“We thought this could be a great fit. Kids go to the classes and the parents who bring them there could do other things. This has worked out,” said Nicole Baculik, general manager of the mall off Racetrack Road in South Strabane.

She said the karate/kickboxing facility “looks phenomenal. The mats are down. Noah has a lot of great ideas and is talking about having a movie night or something like that.”

Baculik said the inclusion of a martial arts studio is an example of how the local Tanger has made some changes in its business model.

“We do a lot of local leasing, which is new, but a huge help. We have become a local mall here, with some out-of-box things that work for shoppers,” she said.

Another change is projected to occur in mid-October, Baculik said, when Play Day – an imaginative play venue for kids 6 and under – opens. It will be two doors down from Excel.

Matt McCracken is pleased to have the studio at Tanger, but is even more gratified at what it means to his youngest child.

“This has been such a good experience for Noah, the responsibility, discipline and respect that are involved,” he said.

Perfecting those qualities will enhance a growth curve that already was impressive. This is a 15-year-old who is well-spoken, confident and determined.

“That’s the way he presents himself,” his father said.

Baculik agreed, saying with a laugh: “Until we met, we thought Noah was a lot older than he is.”

Most instructors and business managers are.