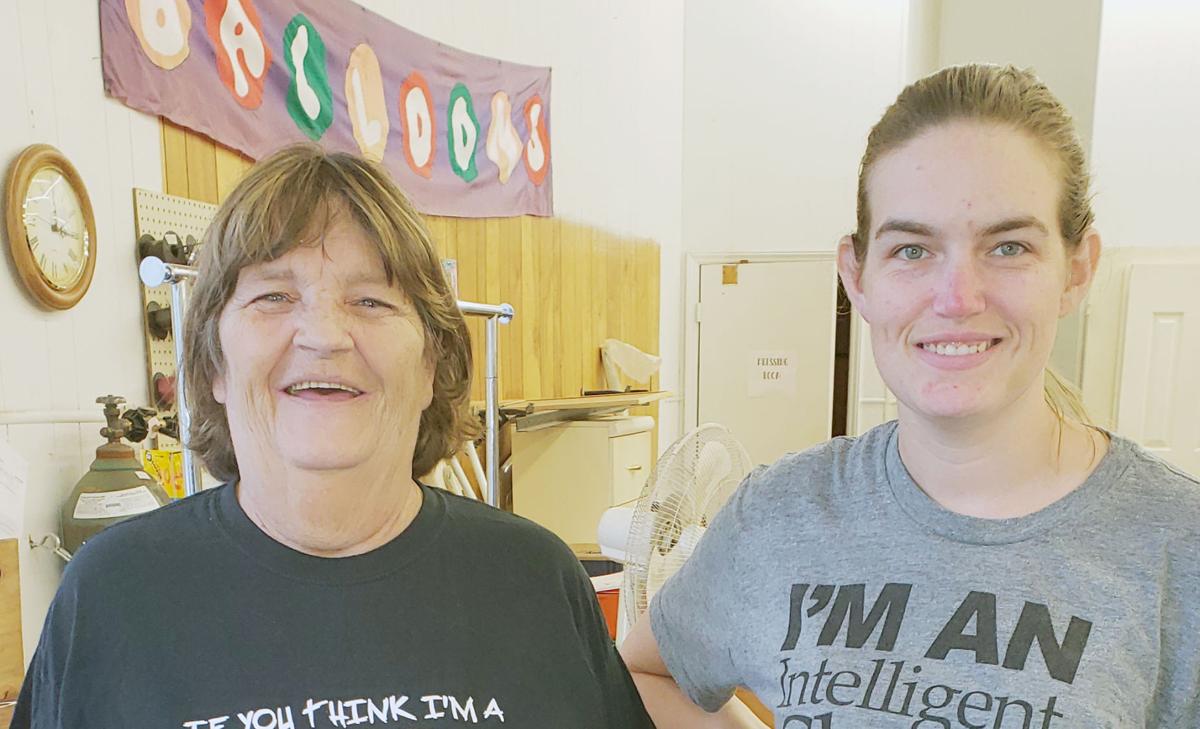 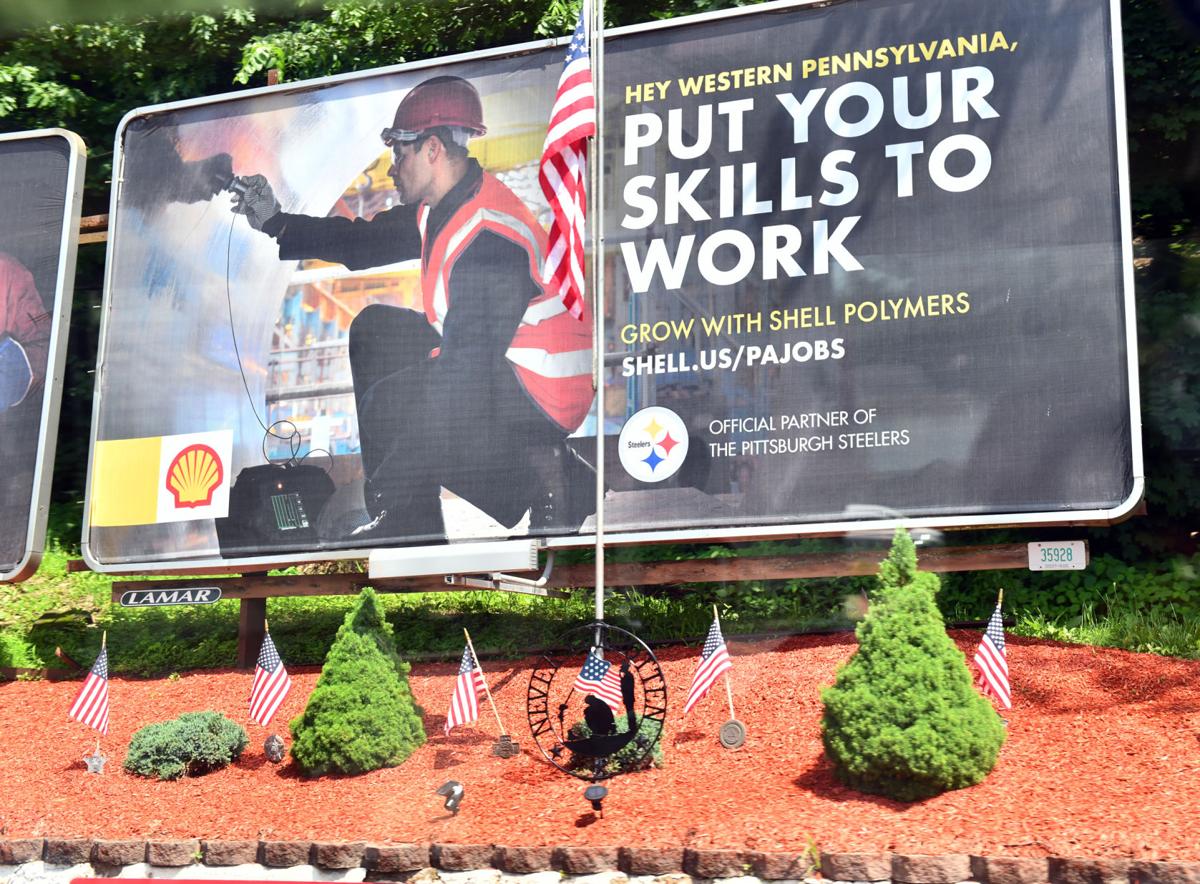 A billboard behind a Vietnam veterans memorial in Midland, Beaver County, encourages workers to consider jobs with Shell at the new ethane cracker plant nearby.

In this photo taken in May 2019, the ethane cracker plant under construction by Shell dominates the bank of the Ohio River in Potter Township, Beaver County.

A billboard behind a Vietnam veterans memorial in Midland, Beaver County, encourages workers to consider jobs with Shell at the new ethane cracker plant nearby.

In this photo taken in May 2019, the ethane cracker plant under construction by Shell dominates the bank of the Ohio River in Potter Township, Beaver County.

A month after shutting down, the Beaver County cracker plant is welcoming back workers.

About 500 people will be on site this week at the Shell Chemical Appalachia complex in Potter Township, after the state determined that a waiver was not necessary to conduct repair, preservation and maintenance operations there.

Construction at the $6 billion project along the Ohio River was halted March 18 in an effort to mitigate spread of the novel coronavirus. Gov. Tom Wolf two days later ordered all “non-life-sustaining” businesses closed, and a list of such businesses was compiled. Those on it could apply for a waiver to remain open.

Some workers were authorized to stay at the site during the shutdown, to disinfect and make repairs. About 300 were at the complex last week, with another 200 expected to join them this week.

Construction of the ethane cracker has been a polarizing issue, endorsed by energy supporters and bashed by environmental advocates. The latter group was upset by the Environmental Protection Agency’s decision Thursday to roll back regulations on the release of mercury and other toxic metals from power plants.

“The EPA’s job is to protect us from threats like toxic pollution, but by undermining mercury standards, it is doing exactly the opposite. According to the EPA’s own data, the Mercury Air Toxics Standard has reduced levels of this dangerous neurotoxin by 96%. That success should be celebrated, not attacked,” Zachary Barber of PennEnvironment said in a statement.

Philadelphia resident Mollie Michel, of Moms Clean Air Force, said in a statement: “Even as Pennsylvanians are sick and dying from coronavirus – a lethal respiratory pandemic – (EPA administrator) Andrew Wheeler and the Trump administration ramp up their efforts to undermine life-saving pollution protections.

“To push forward this cynical giveaway to polluters at this moment in our nation’s history defies belief.”

Like most business owners, Ambur and Cindy Ames have had to improvise during the COVID-19 pandemic. So they started a website for Head of Estate, their Bentleyville consignment shop.

Their Washington Street store is closed, so Ambur and her mother started a website – Head-of-estate-llc.myshopify.com – and made all of their products available for online shopping. Store pickup is the primary option, although shipping arrangements may be made by calling the store at 724-239-2103.

Cindy and Ambur opened their shop in May 2016 and, thus, are coming up on their fourth anniversary as co-merchants. Their Facebook page is Facebook.com/headofestate.

Mon Valley Academy for the Arts’ office may be closed, but the planning continues.

“All of our programs, including some new ones, will be ready to roll out as soon as the stay-at-home order is lifted,” said Mark A. Smith, president of the nonprofit located at 309 5th St., Charleroi.

MVAA will launch a Kindermusik program led by Denice Bradley Hopper, a longtime Kindermusik instructor and Rostraver Township native who has moved back to the Mon Valley from North Carolina. Visual and fine arts also will be added, under the direction of Deni Laskey, who recently joined MVAA’s advisory board.

The organization’s new show choir, VoiceZ on Fire, is on hold until gatherings of 10 or more is advisable. Leading the way are Annette Buffer, an MVAA board member, and Kristen Spahn, MVAA’s treasurer.

MVAA’s open house has been postponed, date is pending, and the high school art sho it is sponsoring has been canceled for the year.

Carla Anderton, a professor of English and communication at Westmoreland County Community College and Seton Hill University, has joined the executive board as secretary.

WesBanco is based in Wheeling, W.Va., but has a formidable presence in Western Pennsylvania – 43 locations. In a few weeks, that market will have a new leader.

Tony Rocco, currently the company’s senior vice president of community banking in Western Pennsylvania, will take over as regional president May 1. He will succeed Michael Mooney, who will retire after 43 years in finance.

Mooney has been the bank’s Western Pennsylvania president for more than seven years. He and Rocco have worked together since 1994, including 18 years with with Fidelity Bancorp before its merger with WesBanco.

WesBanco has 236 financial centers in six states, including two each in the Canonsburg and Washington areas.

The webinars are free. For more information and to register, visit www.calu.edu/gaco or contact Tracy Julian at julian@calu.edu.