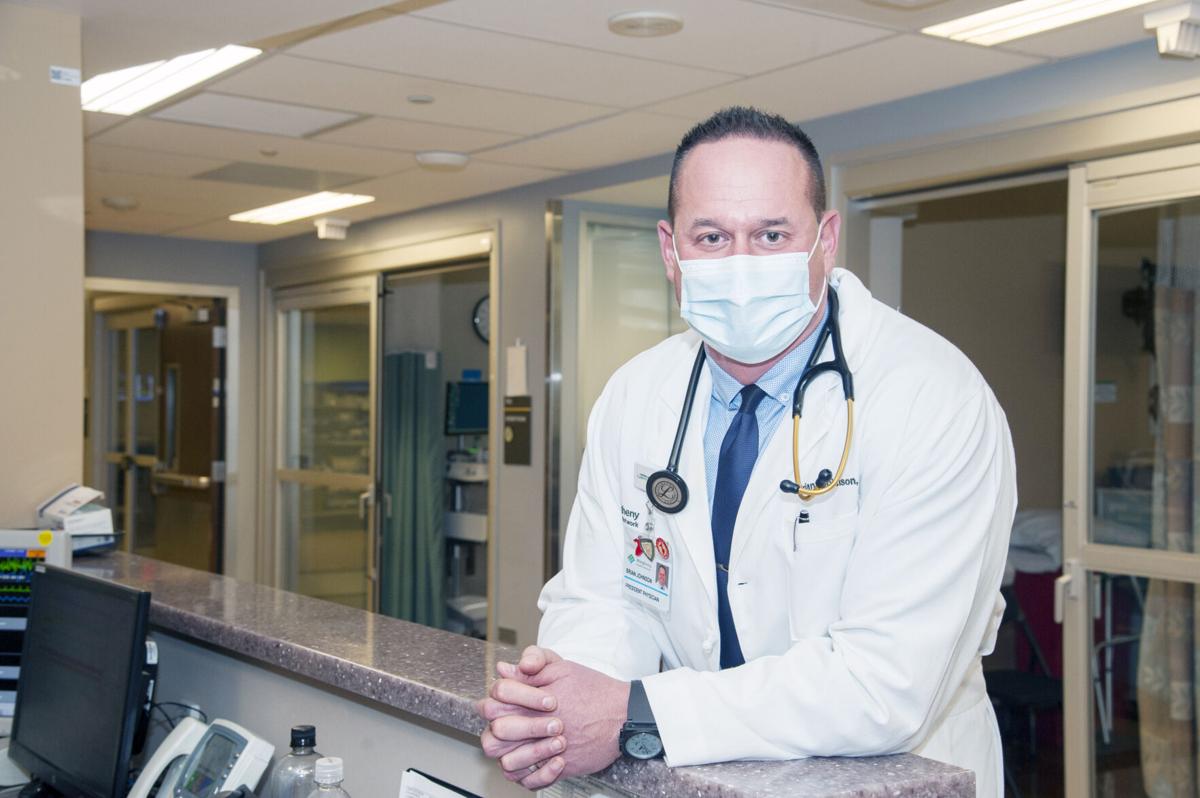 Dr. Brian Johnson, the new president, has been on staff at West Penn Hospital since 2006. 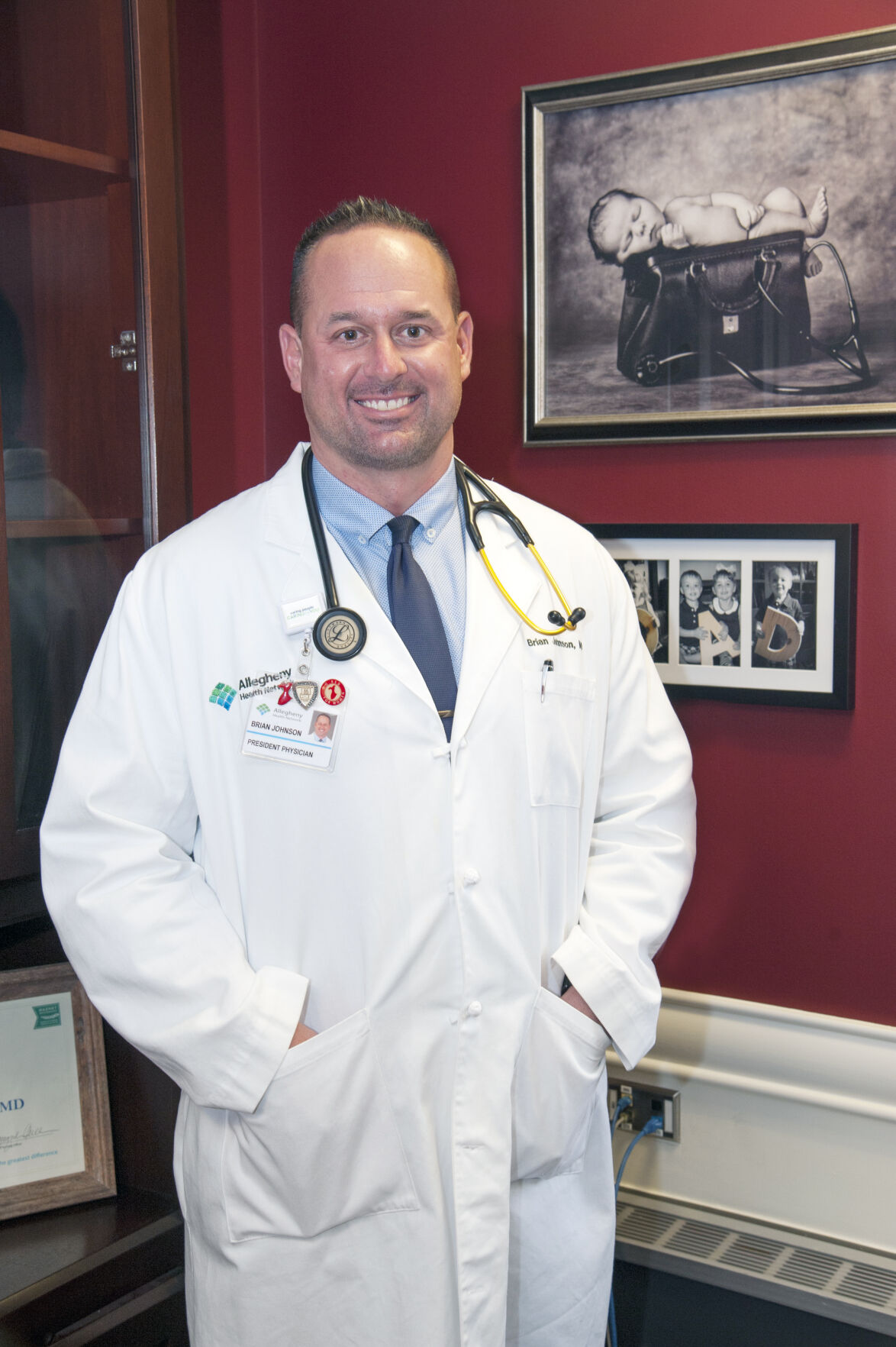 Dr. Brian Johnson, a 1998 Bentworth High School alum, was interested in pursuing a health-care career as far back as middle school.

Dr. Brian Johnson, the new president, has been on staff at West Penn Hospital since 2006.

Dr. Brian Johnson, a 1998 Bentworth High School alum, was interested in pursuing a health-care career as far back as middle school.

Brian Johnson was driven to become a medical doctor long before he would drive a car.

He was a Bentleyville kid, an athletic adolescent, when the health profession began to pique his curiosity. He did, after all, have an inspiration at home.

“My mom was a medical technologist, so I had exposure to health care at a young age,” Brian said. “I knew in middle school and high school that I wanted to do something like this.”

“I suppose, in some way, I influenced him,” Linda Johnson said sheepishly, laughing while acknowledging her son’s early embrace of his future profession.

Then, without pause, she deflected a generous share of credit to a second inspiration at home: Brian’s father, Ron, who was a teacher at Bentworth High School.

“He influenced Brian to pursue education,” she said. “My husband also was a leader at the high school.”

Their son today not only is an experienced physician, but a leader of a big-city hospital.

Brian Johnson, M.D., is president of West Penn Hospital, an Allegheny Health Network facility in the Bloomfield section of Pittsburgh. He was promoted from interim president in early December, when the coronavirus pandemic was raging anew.

Johnson is still a practicing physician, an internist focusing on heart issues with West Penn Medical Associates. And, until he hires someone – probably soon – he is West Penn’s chief medical officer, a position he has had since 2017.

“It’s an honor to just have the opportunity to be in this position,” Johnson said of being president of a hospital where he has been on staff since 2006. “West Penn is part of my fabric and vice-versa. It has a family/community-based feel while remaining a tertiary facility. Working with the people here is special.”

Navigating COVID-19 has been challenging, he admitted, but Johnson said the staffs at West Penn and other AHN facilities ™were ready from the start.

“COVID hit last March and we were preparing for this in November and December of 2019,” he said. “We’ve never had a shortage of personal protective equipment. We’ve had such a patient-focused, high-quality team providing passionate care for patients. We’ve taken care of patients and have never missed a beat.”

Johnson said West Penn is providing 300 to 400 vaccinations a day. Employees who wanted shots were jabbed in mid-December and higher-risk individuals are now receiving the vaccine.

AHN also had two vaccine clinics at PNC Park this month, where the network provided first doses to at-risk seniors.

He and his sister, Carla, learned how to weather all types of storms from their parents, who are now retired. Both offspring have advanced to productive careers. Carla, an attorney, is a partner with McGuireWoods LLP in Pittsburgh.

Linda Johnson worked in medical laboratories for more than 40 years, first as a medical technologist at Washington Hospital, then for a quarter-century at Southwest Medical Center in Bentleyville. Brian worked at Southwest during the summers while he was in high school, learning what he could.

He was a versatile athlete at Bentworth High, playing golf, basketball and baseball all four years before earning his diploma in 1998. Johnson, however, opted to forgo his sports gear for books at Washington & Jefferson College, where he secured his bachelor’s degree. He then graduated from Temple University’s medical school.

Commencement day at Temple tore his parents apart – literally, but not horrifically. In a remarkable coincidence – on the same day, at the same time – Carla graduated first in her class at W&J. Ron and Linda decided to attend separate ceremonies, so they put the kids’ names in a hat and pulled them.

“I went to Philadelphia and Ron saw Carla,” Linda said.

Her son did some clinical rotations and med school training at West Penn in 2004, and returned as a resident in 2006. He has been there since, and has now risen to the top.

Johnson now resides in Sewickley with his wife, Michelle, an antitrust attorney with Reed Smith in Pittsburgh. They have three young children: Madeline, 7; Henry, 5, and Olivia, 2.

Sewickley is a trek from Bentleyville, but a fairly quick 45-minute interstate jaunt. Once a week, Linda and Ron Johnson make the round trip to baby-sit the grandchildren.

Someday, they may help guide them onto a career track as well.