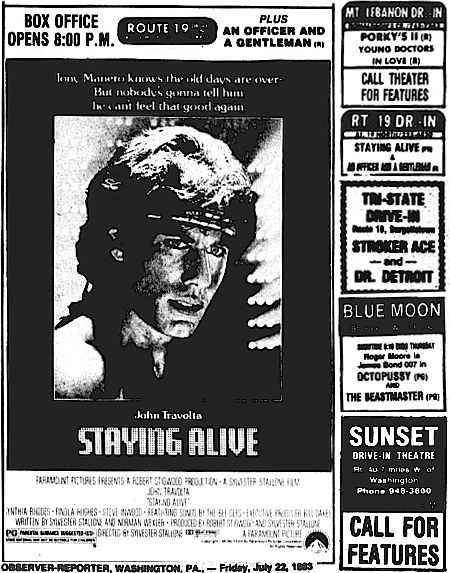 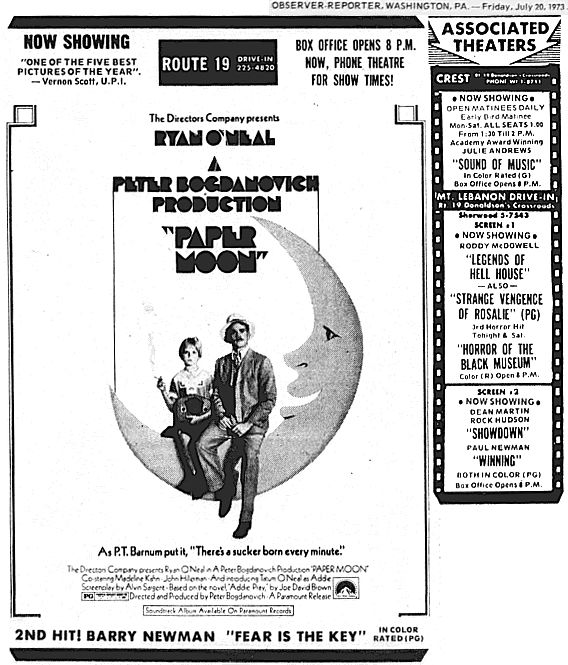 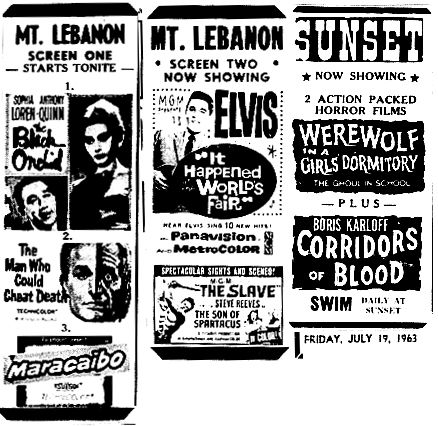 Welcome back for another week of Drive-In Time Machine, the blog that takes a look back at classic drive-in movie ads that ran in the Observer-Reporter from decades past!

We'll start our trip back in time just 25 years ago in 1993. Both the Brownsville Drive-In and Skyview Drive-In in Carmichaels had the exact same line up, with "Hocus Pocus" and the Pauly Shore vehicle "Son-in-Law" on screen one and Clint Eastwood in "In the Line of Fire" and Janet Jackson in "Poetic Justice" on screen two.

While it is now regarded as a Halloween family classic, "Hocus Pocus" bombed at the box office in 1993. On opening weekend, the film only brought in about $8 million against a $28 million budget and finished fourth. Critics also bashed the film - which stars Bette Midler, Kathy Najimi and Sarah Jessica Parker as a trio of witches accidentally brought back to life by a teenager - which probably didn't help.

But despite "Hocus Pocus" later becoming a hit on VHS and through repeated TV airings, I can't help but feel like Disney might be partially responsible for the film's theatrical failure. Why would they release a Halloween movie in the middle of summer instead of holding for October? Of course, last time I watched "Hocus Pocus" was a Christmastime screening on one of Disney's cable channels, so I guess timing still isn't their strongest suit.

After seeing "Hocus Pocus," audiences could have stuck around for the then-latest entry in comedian Pauly Shore's string of starring roles, "Son in Law." Coming on the heels of Shore's breakout role in "Encino Man" and in the midst of his popularity as his comedic stage persona he called "the weasel," "Son in Law" follows Rebecca (Carla Gugino), a small-town girl who brings culture shock home when she returns from college for Thanksgiving dinner with Shore's surfer-caricature character in tow. Through a series of misunderstandings, Crawl begins posing as Rebecca's fiancé and butts heads with her family.

Shore's filmography is the subject of disdain for many film critics and moviegoers, but "Son in Law" bears the distinction of being the best received of them all. I ended up watching it a few years back and was surprised that it held up fairly well.

Moving back another 10 years to 1983 shows a pretty dire situations at area drive-ins. The big movie being promoted was "Staying Alive," the disappointing sequel to "Saturday Night Fever." While the film was a financial success, audiences and critics did not connect to the film. It's mostly remembered for being directed by Sylvester Stallone of all people. "An Officer and a Gentleman" followed the film when it played at the Route 19 Drive-In.

At Mt. Lebanon Drive-in, the weak sequel "Porky's II" and Garry Marshall's soap opera parody "Young Doctors in Love" shared the first screen, while the second one was listed as "call theater for features." That means they were most likely showing X-rated films. Tri-State Drive-In in Burgettstown had the Burt Reynolds' vehicle "Stroker Ace" backed with the strange Dan Aykroyd "scientist-becomes-beloved-pimp" picture "Doctor Detroit."

But Blue Moon Drive-In in West Virginia had a pretty decent lineup with "Octopussy" and "The Beastmaster," the latter of which seems like a perfect '80s drive-in movie. Just a few years later, HBO would make history by seemingly playing director Don Coscarelli's fantasy flick continuously, leading to the joke that the premium channel's name stood for "Hey, Beastmaster's On."

Drive-in choices for this past weekend in 1973 had one clear winner: Peter Bogdanovich's con artist comedy "Paper Moon" at Route 19 Drive-In.

Starring real-life father and daughter Ryan O'Neal and Tatum O'Neal, "Paper Moon" is a depression-era period picture about a con man who agrees to take a 9-year-old orphan on a cross-country drive to her aunt's home. However, on their journey, the con man learns that this young girl has a gift for scamming and they become closer than they expected as a team.

Despite being her first role, Tatum O'Neal won a Best Supporting Actress Oscar for her role in "Paper Moon" and it's easy to see why. She's terrific in the film and the chemistry she has with her father is fantastic - though it's worth noting that their real-life relationship is strained to say the least.

"Paper Moon" was backed with the forgettable crime-drama "Fear is the Key." But if anyone had already seen "Paper Moon" or was turned off by the black-and-white cinematography, there were other options at the Mt. Lebanon Drive-In in Canonsburg.

Screen one featured a horror triple feature that kicked off with the haunted house horror of "The Legend of Hell House" starring Roddy McDowell and based on the novel by Richard Matheson, followed by the home invasion thriller "The Strange Vengeance of Rosalie" from future "Race with the Devil" director Jack Starrett and the 1959 release "Horrors of the Black Museum."

"Horrors of the Black Museum" was released and co-funded by famed exploitation distributor American International Pictures who released the film in "HypnoVista" to go along with the film's plot about a novelist who hypnotizes his assistant to commit crimes so he can get accurate references for his next book. The film begins with a prologue with alleged registered psychologist Emile Franchile claiming the ability to hypnotize the audience through film.

And while we're at it, let's bring our time travels full circle and check out this video of "Hocus Pocus" writer Mick Garris reviewing the "Horrors of the Black Museum" trailer as a part of the "Trailers from Hell" webseries.

Mick Garris on HORRORS OF THE BLACK MUSEUM

For one more quick trip, we'll head back 55 years to 1963 for a double feature of "Werewolf in a Girls' Dormitory" and Boris Karloff in "Corridors of Blood" at Sunset Drive-In in Washington.

"Dormitory" has since fallen into the public domain and the lack of copyright has led to it being included on countless "classic horror" and "drive-in movie" DVD box sets. Many film fans have likely been enticed by its lurid title only to find its quite a dull film - and that could have been true for audiences at the time, as the ad copy from Sunset called the film an "action packed horror" movie.

That brings us to the end of this week's edition of Drive-In Time Machine. Come back next week when we feature a film from one of Pittsburgh's most famous directors, a hit G-rated horror movie that inspired "The Blair Witch Project" and a movie from the king of movie marketing.