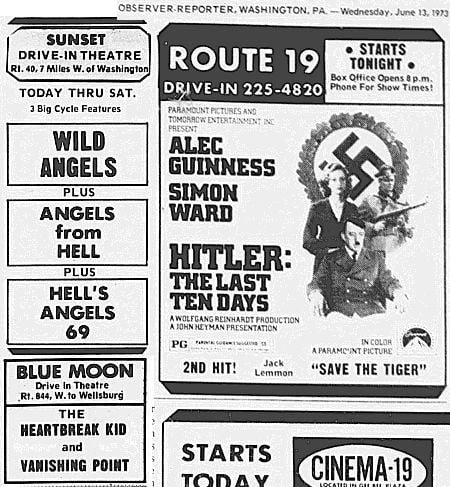 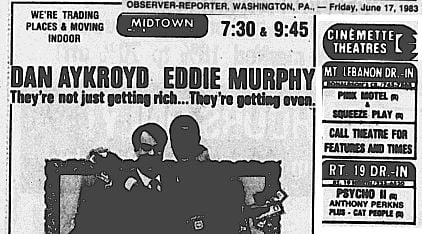 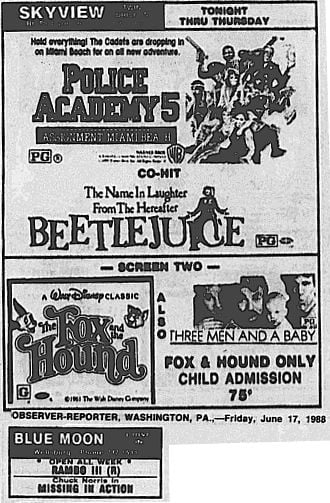 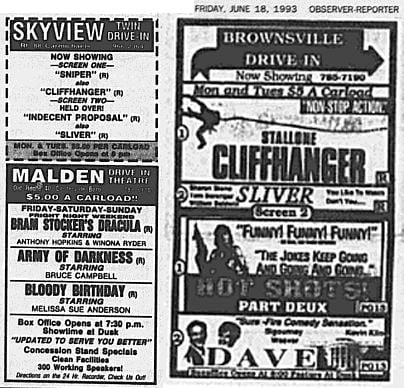 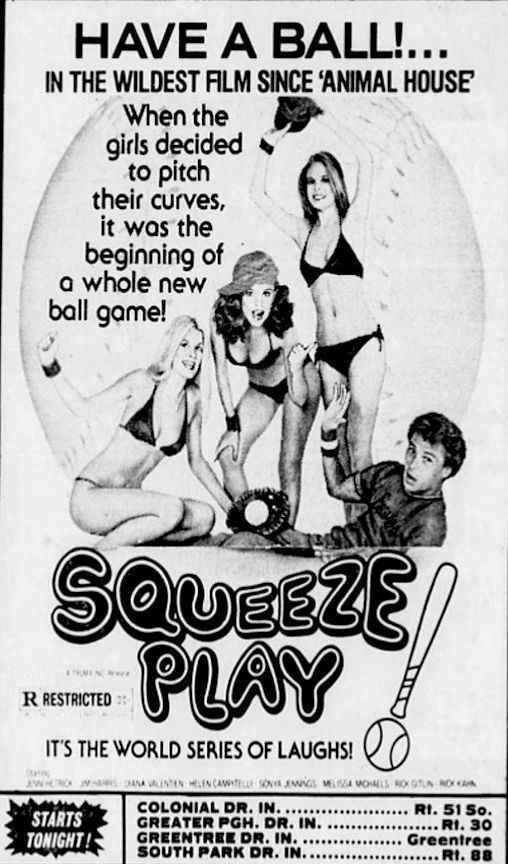 Going through the Observer-Reporter archives for the third weekend of June brought up quite a few films that would go on to become classics in their genres or even create their own subgenre of film. Let's hop in the Drive-In Time Machine and see what was playing in the past.

Back in 1973, Route 19 Drive-In was opening "Hitler: The Last Ten Days" with Alec Guinness portraying Adolf Hitler during the Nazi dictator's decline. But at Sunset Drive-In, motorcycle pictures took over the screen for a "big cycle" triple feature.

During production the film, Fonda got an idea for his own motorcycle movie and that would result in "Easy Rider" just three years later. Also, according to Bruce Dern's daughter, famed actress Laura Dern ("Jurassic Park," "Star Wars: The Last Jedi"), she was conceived on the set of the film. The film's success led to many imitations - some also produced by Corman - and the entire "outlaw biker" subgenre can be traced back to this film.

However, the "outlaw" part didn't set well with the real Hell's Angels: according to Roger Corman, they filed a $1 million defamation lawsuit against him and also threatened to kill him!

Thirty-five years ago, the owners of the Route 19 Drive-In and the Midtown Theatre in Washington took the name of the 1983 Eddie Murphy and Dan Aykroyd comedy "Trading Spaces" quite literally.

"Trading Spaces" had originally opened in Washington County at Route 19 on June 10, 1983, as a double feature with "American Gigolo" starring Richard Gere. Strangely, Route 19's second screen also had "Gigolo" as the b-picture to the James Bond flick "Octopussy."

However, by June 17, it was announced that "Trading Spaces" was "trading places and moving indoor" to the Midtown.

It is quite odd to see that a hit movie first opened on a drive-in screen as late as 1983, especially considering the star power of Murphy and Aykroyd at the time.

"Trading Spaces" was one of two 1983 releases for director John Landis - who was a hot property after the successes of "National Lampoon's Animal House" and "An American Werewolf in London." However, his other 1983 film, the collaborative effort "Twilight Zone: The Movie," would be marred by poor reviews and an on-set tragedy on Landis' watch that I'll be covering in a future edition of this blog.

At Mt. Lebanon Drive-In, an R-rated sex comedy double feature was offered on the first screen. Up first was the long-forgotten farce "Pink Motel," but the second movie, the 1979 release "Squeeze Play," is actually quite significant in independent film history, as it laid the groundwork for one of the most infamous independent film studios, Troma.

Before Troma's founders Lloyd Kaufman and Michael Herz took video stores and late night cable TV by storm with schlocky horror movies like "The Toxic Avenger" and "Class of Nuke 'Em High," they debuted as a co-directing team with "Squeeze Play."

The film follows a group of women who get fed up with their boyfriends focusing too much on their softball team and form a team of their own, resulting in a battle of the sexes on the diamond.

According to Kaufman's book, "All I Needed To Know About Filmmaking I Learned From the Toxic Avenger," "Squeeze Play's" success was actually thanks to a double feature booking.

After production was complete, Herz and Kaufman were in quite a dilemma: they struggled to find theaters willing to book the film and even international sales were difficult, as Kaufman explains that baseball isn't as popular outside of America and softball is pretty much unheard of.

However, a theater owner in Virginia needed to fill a double feature with "The In-Laws" and contacted the fledging Troma Studios to book "Squeeze Play." The audience went wild over the film and the film's distribution went from "one print to two or three hundred," according to Kaufman. The profits allowed Kaufman and Herz to buy offices in New York City and its success led to the duo directing three more of what they called "sexy comedies" before pivoting to horror - albeit, still with a wacky comedic style.

Going ahead just 5 years to 1988 brings up three different double feature picks. At the Skyview Drive-In in Carmichaels, audiences could see Tim Burton's "Beetlejuice," but at the cost of having to make it through "Police Academy 5: Assignment Miami Beach" beforehand. On the second screen, "The Fox and the Hound" and "Three Men and a Baby" was a nice family double feature - though parents also had the option to just pay for their children to see "Fox" for the low cost of 75 cents!

However, action movie fans could've driven across the border to the Blue Moon Drive-In in Wellsburg, W.Va., to catch a much more macho lineup with "Rambo III" and the Chuck Norris vehicle "Missing in Action."

Interestingly, "Missing in Action" was actually produced as a sequel to a Chuck Norris film that had not yet been released. But when the producers at Cannon Films saw early footage from the sequel, they decided it was a better movie and decided to switch the release plans so the sequel came out first and the originally intended first film would be the follow-up, resulting in more confusion than necessary for Chuck Norris fans.

Twenty-five years ago, the Malden Drive-In in Brownsville offered a "Fright Night Weekend" triple feature of horror movies the weekend of June 18, 1993. For just $5 a carload, horror movie fans could catch "Bram Stoker's Dracula," "Army of Darkness" and a movie listed as "Bloody Birthday" starring Melissa Sue Anderson of "Little House on the Prairie."

While there is a 1981 slasher movie titled "Bloody Birthday," it does not star Anderson. It's most likely the film playing was "Happy Birthday To Me," which is another slasher film released in 1981 that does indeed star Anderson. I'm not sure which title was actually playing, but either way, it's quite strange that a movie from nearly a decade earlier would be playing with two recent releases.

"Army of Darkness" is the third and final film in director Sam Raimi's "Evil Dead" trilogy. Beginning with the 1981 low-budget hit "The Evil Dead," all three films have become cult classics.

When Raimi chose to make a sequel to his hit debut in the mid-'80s, early ads in trade magazines noted that the title would be "The Medieval Dead" and feature the film's protagonist, Ash, sent through a time portal into the middle ages. However, when the budget for "Evil Dead 2" wasn't high enough, Raimi scrapped the idea and decided to save it for the next sequel, which became "Army of Darkness."

While "Army of Darkness" flopped at the box office, the film became a minor hit on home video and attracted new audiences to the trilogy thanks to its more mainstream-friendly comedic tone. In fact, "Army of Darkness" is arguably the most recognizable film of the series - as it is the only one to get a theatrical release from a major studio (Universal) and has been reissued countless times on DVD and Blu-Ray.

Sadly, it appears "Darkness" will be the final feature film in the "Evil Dead" saga. While Campbell and the crew returned for a Starz TV series, "Ash Vs. Evil Dead," it was recently canceled after its third season. Upon the cancelation, Campbell announced he had retired from the role of Ash, effectively squashing any hopes for more "Evil Dead."

That's a wrap for this week's Drive-In Time Machine! Join us next Monday, when we'll look at the most controversial film in the Disney vault and the grand opening of Mt. Lebanon's second screen!