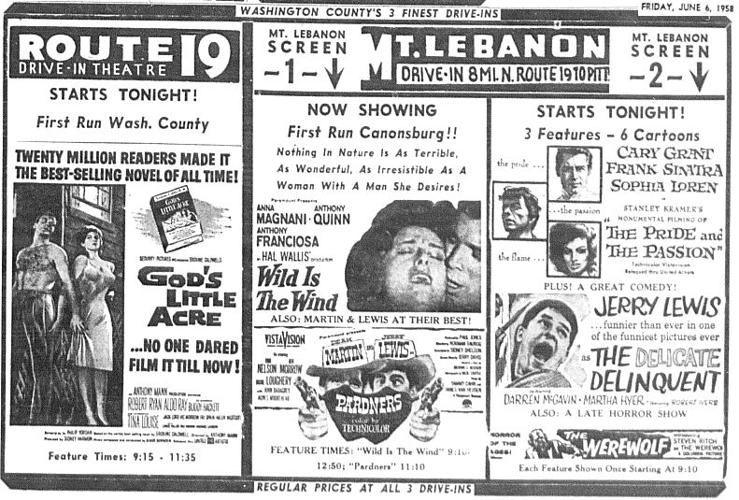 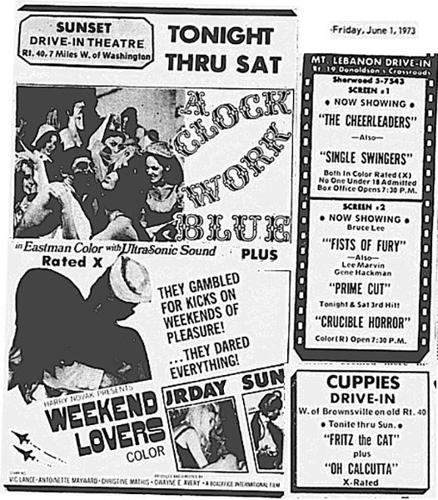 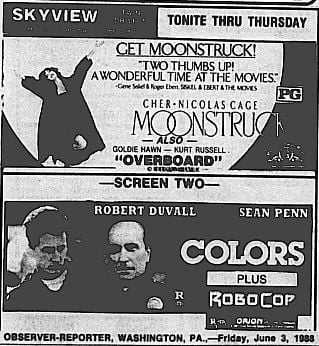 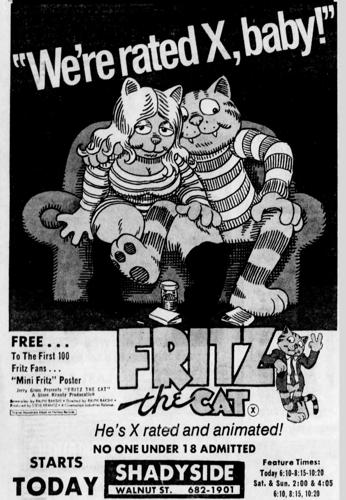 A print advertisement for "Fritz the Cat" playing at Sunnyside theater in Pittsburgh. Courtesy of Don Dzikowski

The stars were out at the Mt. Lebanon Drive-In 60 years ago with major names highlighting the movie lineups at Route 19 and Mt. Lebanon this weekend in June 1958.

Mt. Lebanon was boasting double features with a Jerry Lewis comedy on each screen. Screen one had Lewis and Dean Martin in the Western comedy "Pardners" as the b-movie to the first-run showing of "Wild is the Wind" starring Anna Magnani and Anthony Quinn. Screen two had Lewis as "The Delicate Delinquint" after a screening of Stanley Kramer's "The Pride and the Passion" with Cary Grant and Sophia Lauren. That showing also included a "late horror show" with "The Werewolf" for anyone who made it through both films.

Route 19 only had one offering: the film adaptation of the Erskine Caldwell novel "God's Little Acre." Starring Robert Ryan, Aldo Ray and the future "movie star" of TV's "Gilligan's Island" Tina Louise, the film follows a dysfunctional Georgia family's obsession with wealth and sex during the Great Depression. The film - much like the book - was quite controversial at the time it was released, with some theaters not allowing anyone under the age of 18. However, the ad from Route 19 does not mention any age restrictions.

Also worth noting is that "God's Little Acre" has a small part in the Communist blacklisting in Hollywood in the 1950s. Screenwriter Ben Maddow was blacklisted at the time for his alleged Communist ties and sympathies and the script for the film was instead credited to Academy Award-nominee Philip Yodran. When the film was later restored by the UCLA Film and Television, Maddow was given proper credit for the screenplay in the opening titles.

Jumping ahead ten years to 1968 shows there were quite a few great options for catching a movie outdoors 50 years ago.

Route 19 had the biggest picture of the week with "Wild in the Streets," a comedy following a rock star named Max Frost who uses his fame and politically charged lyrics to rally the youth of America to vote him in as president. Christopher Jones stars as Frost and the supporting cast includes Shelley Winters, Hal Holbrook and Richard Pryor.

This youth-counterculture film popped up in a few opinion during President Donald Trump's campaign in 2016, with Metro claiming Trump's campaign was an "age-reversed" version of Max Frost's fictional rise to popularity. It's interesting to see a film from 1968 still being analyzed for its alleged predictions on modern politics.

But if "Wild in the Streets" doesn't sound like something you'd be interested in, Sunset Drive-In also had the Western comedy "Waterhole No. 3" backed with the Italian thriller "The Hired Killer" starring "Django" himself, Franco Nero. And you could always head over to Mt. Lebanon Drive-In and for the last showings of "Planet of the Apes."

When we turn to 1973, there are prime examples of one of the more lurid things people remember about area drive-ins: X-rated movies.

It's certainly true that several of the area drive-ins would show pornographic films for adults only, but in the case of Cuppies Drive-In in Brownsville, the X-rating did not necessarily mean pornography.

Cuppies' lineup included "Fritz the Cat," which is widely known as the first X-rated animated movie. Directed by soon-to-be infamous animator Ralph Bakshi ("Heavy Traffic," "American Pop," "Lord of the Rings") and based on the classic underground comic strip from Robert Crumb, the distributor of "Fritz" wore the rating like a badge of honor with the tagline "He's X-rated and animated."

While there is a bit of animated animal nudity and cartoon sex scenes in "Fritz the Cat," the film is much more in line with modern day adult cartoons played on late-night cable, albeit with the aforementioned content that still wouldn't pass the censors.

"Fritz" was followed by another X-rated movie, "Oh Calcutta!" However, this was actually a filmed version of a very controversial off-Broadway play consisting of sketches about sex with extended sequences of nudity. There wasn't any actual sex acts in the film, but the controversy was still enough to get the film saddled with an X.

Mt. Lebanon had a mix of X-rated content this weekend in 1973. While "The Cheerleaders" is a comedy film with gratuitous nudity that were known to bring big crowds to the drive-in (coined "sexploitation" films in the industry). However, I can't seem to find any information on the b-picture in the lineup, listed as "Single Swingers."

Sunset Drive-In also had a double-feature of movies that delivered salacious sex scenes. Up first on the X-rated double bill was "A Clockwork Blue" and the b-picture was "Weekend Lovers."

Judging from reviews of the Blu-Ray release, anyone heading to Sunset to see a pornographic riff on Stanley Kubrick's "A Clockwork Orange" would have been sorely disappointed. Reviews of the Vinegar Syndrome Blu-Ray release describe the film as a time travel farce from a cast and crew lacking in comedic timing, which is of course intercut with hardcore sex scenes.

But Mt. Lebanon's second screen offered up a triple-feature with no X-ratings to be seen. Instead, audiences could see Bruce Lee's second major role in "Fists of Fury," Lee Marvin and Gene Hackman in the thriller "Prime Cut" and the 1971 British horror film "Crucible of Horror" for one low price.

And even more of a palette cleanser would come 15 years later. The lineups at Skyview Drive-In in Carmichaels this past weekend in 1988 were all mainstream movies. On screen one, you had Cher and Nicolas Cage in "Moonstruck" and the Goldie Hawn and Kurt Russell comedy "Overboard" - which was recently remade.

On the second screen was the cop drama "Colors" backed by one of my all-time favorite popcorn action movies, "Robocop." It's worth noting that "Robocop" also has some local ties, with the former Wheeling-Pittsburgh Steel Mill in Monessen providing the backdrop for the film's climax.

That wraps up our first blog of June! Join us next week for another trip in the Drive-In Time Machine!

A note on comments

Our current commenting system, The World Table, is shutting down effective July 31. Ahead of then, we'll be transitioning to a new commenting system that will only require your subscriber credentials to log in. We'll be testing and deploying this new system in the coming days. Please email webmaster@observer-reporter.com or call 724-222-2200 ext. 2421 with any questions or concerns. Thanks for reading and commenting!