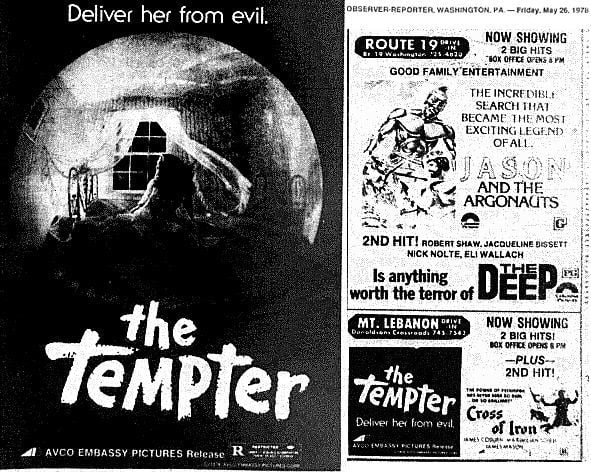 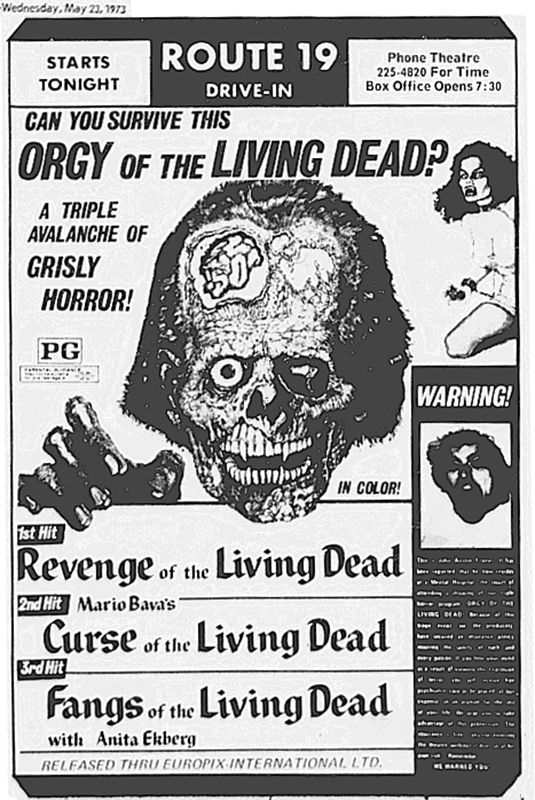 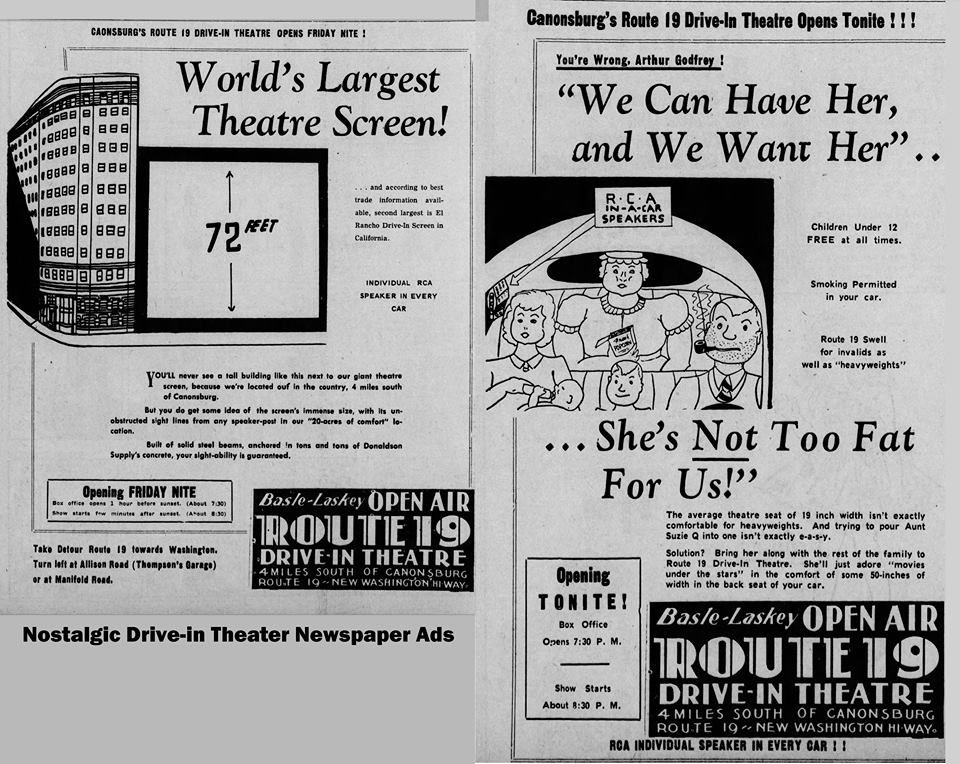 Since many moviegoers were reliving the thrills of "Star Wars" this weekend by checking out "Solo: A Star Wars Story," it seems like a great time to look back at some historic movie theater ads. Let's take another trip in the Drive-In Time Machine and see what we can find in the Observer-Reporter archive of movie advertisements!

For the final weekend of May 30 years ago, Skyview Drive-In in Carmichaels had the hit Tim Burton film "Beetlejuice" with the sci-fi comedy "Innerspace" as the b-feature.

Burton's cartoonish macabre visual style made "Beetlejuice" into a hit and a pop culture classic. It's a favorite film from my childhood that has held up surprisingly well. I can remember watching a copy taped from TV repeatedly as a kid and was surprised to find that the theatrical release was not as family-friendly as the TV edit.

I must not have been the only one who remembers the sanitized version - when playing the movie from a 35mm print at a theater in college, another student came up to me ask if it was an "uncut" print after Beetlejuice dropped an f-bomb.

While time hasn't been as kind to "Innerspace," the film is the type of silly fun that would've been fantastic to see at the drive-in. "Gremlins" director Joe Dante helmed this comedy where Martin Short plays a neurotic grocery store clerk that ends up with a miniaturized Dennis Quaid injected into his body as a part of a top secret experiment. Later winning an Oscar for its visual effects, "Innerspace" would've been a great second pick in this double feature and definitely what I would've recommended to audiences back in 1988.

At the same time, Skyview's second screen wasn't bad either, boasting "Critters 2: The Main Course" and "The Hidden."

"Critters II," which brings the spiny, carnivorous alien creatures from the first film back to Earth for a second helping of human victims, is the '80s equivalent to the kind of campy monsters movies that the drive-in became famous for in the '50s. The follow-up movie was "The Hidden," which I've not seen, but I'm interested after looking it up and seeing it's a sci-fi murder mystery with "Twin Peaks" and "Blue Velvet" star Kyle MacLachlan.

Just 10 years earlier in 1978, the Route 19 drive-in was playing a reissue of the 1963 Greek mythology epic "Jason and the Argonauts" as their first feature of the night. It may have been playing 15 years after its original release, but it would've been amazing to see the special effects from stop-motion animation pioneer Ray Harryhausen on the big screen.

Harryhausen came to fame when creating the effects for the 1953 monster movie "The Beast from 20,000 Fathoms" - where he created his trademark technique of "Dynamation." Harryhausen's technique allowed for his frame-by-frame animations of clay models to be integrated with footage shot with live actors. He continued creating movie special effects until 1981's "Clash of the Titans" and passed away in 2013.

"Argonauts" was paired with the adventure thriller "The Deep" where treasure-hunting divers Jacqueline Bisset and Nick Nolte get more than they bargained for when investigating a World War II shipwreck. which is understandable since Columbia Pictures handled distribution for both films.

A bit further north, Mt. Lebanon Drive-In had quite a strange combination of titles with "The Tempter" - an Italian knockoff of "The Exorcist" that was also released under the title "The Antichrist" - and "Cross of Iron" - a WWII film from director Sam Peckinpah ("Straw Dogs," "The Wild Bunch").

Film historian Tim Lucas covers this triple feature program in his book "Mario Bava: All the Colors of the Dark," as the second movie in the lineup, "Curse of the Living Dead," is actually an edited version of Bava's classic horror film "Operazione paura," which Europix had released in as "Kill, Baby … Kill!" in the U.S. in 1968. Lucas said this cut of the film dropped an entire reel of the movie!

Another Italian production, "Revenge of the Living Dead," was also originally released by Europix in 1968 as "The Murder Clinic" and shortened for this triple bill. According to Lucas, "Fangs of the Living Dead" was the only movie that hadn't hit the U.S. previously and is actually a Spanish-Italian vampire movie titled "Malenka."

While it's hard to see from the microfiche in the O-R archive, Europix's ad campaign includes a warning that a man named John Austin Frazier had wound up in a mental institution after attending the triple feature program, which promises the distributor will pay for psychiatric care if audience members "lose (their) mind as a result of viewing this explosion of terror." It ends with the claim, "We warned you!"

Of course, these claims are all a bunch of bologna. According to Lucas' book, the ad campaign was the brainchild of Europix sales executive Bob Kilgore. There was even a trailer made that shows Frazier - actually played by Victor Bumbalo. In the trailer, we get to see Frazier struggling in a straightjacket while very, very quick flashes of these three movies play.

I love these strange multi-feature horror trailers, but this one has an interesting backstory. According to Lucas' book, the trailer was directed by Alan Ormsby - who also made the cult classic horror movies "Deranged" and "Children Shouldn't Play with Dead Things."

At that time, Ormsby was known for his collaborations with director Bob Clark, who would go on to redefine what people think of Christmas movies twice: first with the slasher film "Black Christmas" in 1974 and again with the movie best known for playing for 24 hours straight every December 25: "A Christmas Story."

But before Clark was filming scenes of leg lamps and Red Rider BB guns, he was shooting the trailer for this triple feature. In Lucas' book, Ormsby recalls that they shot the footage right inside the offices of Europix, which were located in New York City's Times Square. However, this wasn't the Times Square you see on TV today, as back in 1973, the area was known for its seedy "grindhouse" theaters that would run everything from exploitation films to pornography.

Before we conclude our trip this week, I have a bit of interesting trivia about the Route 19 Drive-In.

A drive-in enthusiast named Don Dzikowski recently got in touch with me about his Facebook group, Nostalgic Drive-In Theater Newspaper Ads, and passed along an advertisement showing the opening of Route 19 on May 14, 1948. According to the ad, Route 19 apparently had the largest drive-in screen in the world at 72 feet tall - noting that the second largest is the El Rancho Drive-In in California.

Another ad makes reference to Arthur Godfrey's hit song "Too Fat Polka (She's Too Fat For Me)" by showing a cartoon where a larger woman, named Aunt Suzie Q, could comfortably watch a movie in the backseat of the family car.  The copy states that Route 19 was "swell for invalids as well as 'heavyweights.'" That's certainly one way to market a drive-in movie theater!