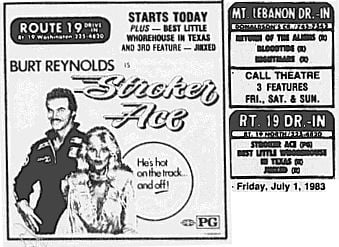 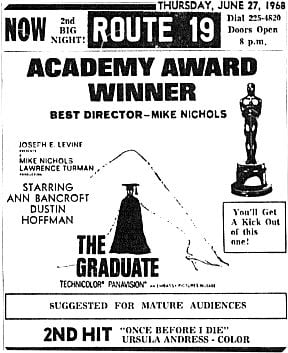 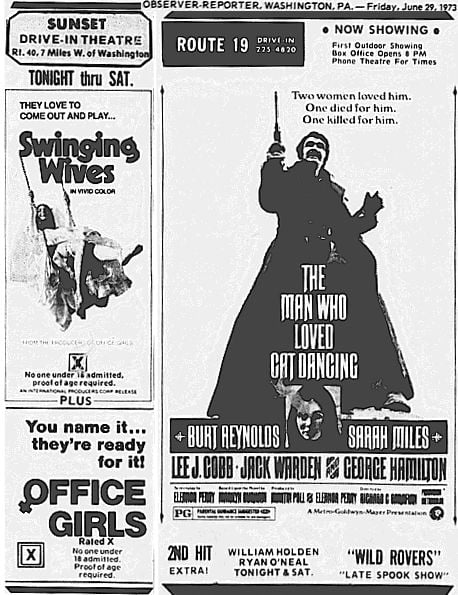 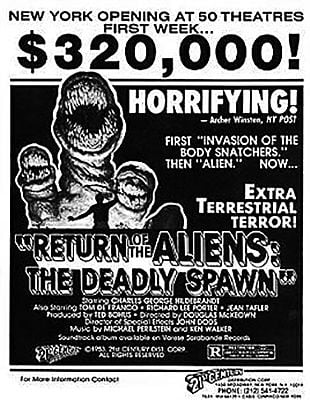 This past weekend was sunny and hot, but the nights were the perfect temperature for watching movies under the stars at a drive-in theater.

But have you wondered what was playing at drive-in movie theaters in the area during their heyday? Well, I've dug through the Observer-Reporter archives to find some of the coolest drive-in ads and take a nostalgic look back in this weekly Drive-In Time Machine blog.

Starting 60 years ago in 1958, Route 19 Drive-In Theater would have offered a fantastic night at the movies for western fans with the first-run showing of "The Bravados" starring Gregory Peck and Joan Collins. The film was in such high demand that the theater didn't book a second feature and instead offered two showtimes.

However, '50s moviegoers who wanted more bang for their buck could have seen a triple feature of "Darby's Rangers" starring James Garner, "Mohawk" and "The Green-Eyed Blonde" at Sunset Drive-In. On top of the three movies, Sunset was also advertising five cartoons, which made it a deal that couldn't be beat.

Jumping forward 10 years to 1968 and Route 19 was promoting outdoor screenings of the Academy Award-winning classic "The Graduate," ensuring potential viewers "you'll get a kick out of this one."

The film is now regarded a classic, but at the time of its release, "The Graduate" - which follows a recent college graduate who is seduced by an older woman and finds himself torn between her and her daughter - was deemed to be offensive. The ad copy from Route 19 in 1968 notes that the film is "suggested for mature audiences."

"The Graduate" was followed by the war drama "Once Before I Die" starring Bond girl Ursula Andress.

Going back 35 years to 1973 brings up another first outdoor showing of a film at Route 19. On June 29, 1973, the Burt Reynolds' vehicle "The Man Who Loved Cat Dancing" opened at the theater with the heist adventure film "Wild Rovers" as the b-picture.

The title may sound odd, but "Cat Dancing" is actually the name of Reynolds' character's Native American wife who is raped and murdered, sending the protagonist on a search for revenge that leads to a life of crime.

And 25 years ago in 1983, Reynolds was back on the Route 19 Drive-In screen as the lead in the NASCAR comedy "Stroker Ace" and the musical "The Best Little Whorehouse in Texas." The Burt twofer was followed by the Bette Midler box office bomb "Jinxed."

However, the real drive-in winner of this past weekend in 1983 was a triple-feature at Mt. Lebanon Drive In in Canonsburg featuring "Return of the Aliens," "Bloodtide" and "Nightmare."

The title changed again to "Return of the Alien's Deadly Spawn" when the film hit VHS. I can vividly remember seeing the oversized box at my local video store, but it wasn't until years later that I finally caught the film on a lovingly remastered DVD from Synapse Films.

Fans of classic sci-fi and '80s horror flicks should definitely seek out "The Deadly Spawn." Made on a shoestring $25,000 budget by a team of enthusiastic amateurs, the film combines the tone of '50s b-movies like "The Blob" with the shocking gore of "The Evil Dead." The low-budget nature of the film just adds to its charm, especially considering how well the ambitious effects work.

Other two features were also distributed by 21st Century. "Bloodtide," follows James Earl Jones as a treasure hunter who accidentally frees a monster that forces a local village to sacrifice virgins. I've not seen the film, but that sounds like a hell of a synopsis.

"Nightmare" is also known by the title "Nightmare in a Damaged Brain" and is quite a controversial title among horror fans for the alleged involvement of "Dawn of the Dead" special effects maestro and Pittsburgh native Tom Savini.

Savini was credited in the original release as the film's "special effects director," but Savini insists he was only a consultant who offered advice to the makeup crew and threatened to sue if his name was not removed. However, director Romano Scavolini maintains that Savini designed and created all of the special make-up effects other than prosthetic effects. Photos of Savini on set have also surfaced, leading horror fanatics to debate whether or not he worked on the film.

Regardless of whether Savini was involved or not, "Nightmare in a Damaged Brain" has gained quite a cult film following and is set to be released on a newly restored Blu-Ray from Massacre Video soon.

We're all done for this week's Drive-In Time Machine! Join us again next week!