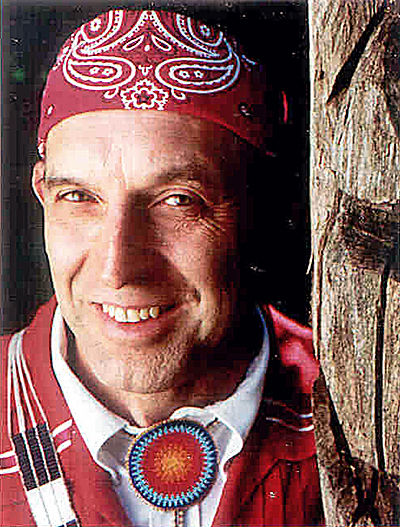 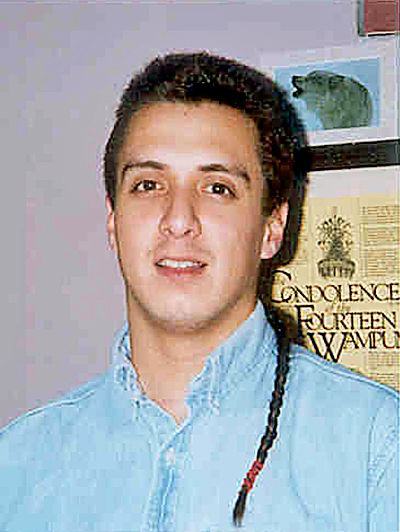 Joseph Bruchac lives with his wife, Carol, in the Adirondack mountain foothills town of Greenfield Center, New York, in the same house where his maternal grandparents raised him. Much of his writing draws on that land and his Abenaki ancestry. Although his American Indian heritage is only one part of an ethnic background that includes Slovak and English blood, those Native roots are the ones by which he has been most nourished. His two grown sons, James and Jesse, continue to work extensively in projects involving the preservation of Abenaki culture, language and traditional Native skills, including performing traditional and contemporary Abenaki music with the Dawnland Singers.

He holds a B.A. from Cornell University, an M.A. in Literature and Creative Writing from Syracuse and a Ph.D. in Comparative Literature from the Union Institute of Ohio.

His honors include a Rockefeller Humanities fellowship, a National Endowment for the Arts Writing Fellowship for Poetry, the Cherokee Nation Prose Award, the Knickerbocker Award, the Hope S. Dean Award for Notable Achievement in Children’s Literature, the 1998 Writer of the Year Award and the 1998 Storyteller of the Year Award from the Wordcraft Circle of Native Writers and Storytellers and the 1999 Lifetime Achievement Award from the Native Writers Circle of the Americas.

An interview with Joseph Bruchac

Q. You have written many kinds of books. Is a serialized book in any way unique?

A. I grew up reading and loving Charles Dickens. My grandmother had a whole set of his works on a lower shelf that I was just tall enough to reach when I was seven. By the time I was eleven, I’d read every one of them (as well as Robert Louis Stevenson, Arthur Conan Doyle, Rudyard Kipling, Edgar Rice Burroughs and Sir Walter Scott). Thus, the chance to attempt something in that serial form which was so important to Dickens and which introduced his work to magazine readers all over the world really excited me. The cliff hanger ending for each chapter also appealed to me as not only a writer but as a professional storyteller. Many of our traditional Native American stories are adventures, structured around a hero or heroine encountering one challenge after another and overcoming it. Some of those tales were told in more than one sitting, ending the story at a particularly crucial or exciting point.

Q. You share your Native culture through books, poetry, storytelling, and music. Have you found a way to put all this together?

A. I’m lucky enough to have been given the ability to craft language in many ways from poetry and music to oral storytelling and prose, A number of American Indian elders, such as my dear friend Dewasenta, a Clan Mother of the Onondaga Nation, have pointed out to me that such a gift bears a responsibility.

Q. Your protagonist, Mac, is truly multicultural – experiencing his traditional Native culture and contemporary American culture all at once. It seems that as he balances the two, he gets more of himself in return. How did you balance your heritage and contemporary American culture when you came to the truth of your Abenaki Indian roots only as an adult

A. My experience of learning far more about my Native American heritage as an adult is not an unusual thing in this country. Many people who now emphatically claim their American Indian identity grew up much the same way the way I did, in a family that didn’t talk about being “Indian.”

In the United States, the “melting pot” experience has often led those in one generation to hide or de emphasize ethnicity so that their children will do better than they did. I’m of mixed blood Slovak and English, as well as Abenaki Indian. My Slovak grandparents did not want their grandchildren to learn the Slovak language and put a high premium on being “real Americans.” So, aside from that small percentage of us which was “English,” my whole family was in ethnic denial when I was a child. Yet certain things that were Indian, that were Abenaki, crept through. Among them was the way I was raised by my grandparents never struck, never shouted at when I did wrong. Instead I was talked to or told a story (though not a “traditional tale,” usually one about when they were young and made the same sort of mistake I’d made and learned from it). I’d learn later that a lack of physical punishment characterizes traditional Native American childrearing.

Doesn’t Fall Off His Horse,

The Legend of the Windigo,

David Kanietakeron Fadden is a member of the Wolf Clan of the Mohawk community of Akwesasne. He shares in the operation of the Six Nations Indian Museum in the Northeastern Adirondack Mountains in Onchiota, NY. David attended and graduated from the Saranac Lake Central School where he received recognition for his art. He attended North Country Community College in Saranac Lake, NY. In conjunction with formal art training he has learned technical skills, artistic insight, and other appropriate knowledge from his parents: John Fadden, educator, illustrator and painter; and Elizabeth Eva Fadden, wood sculptor. His particular area of expertise, with respect to creating images of Native Americans, has been nurtured by learning from his paternal grandfather, Ray Fadden, designer, author, and founder of the Six Nations Indian Museum of Onchiota, New York.

An interview with David Fadden

A. There is no great difference between illustrating the two. The only difference is that the readers cannot read the entire serialized story at one reading. They have to wait for the next chapter in the paper. That’s why I try to make the drawings as interesting as possible, to keep the reader interested and to anticipate what will come next.

Q. Stories have structure. Is there such a thing as picture structure, where specific elements of an illustration elicit emotional responses?

Q. You share your Native culture through art and storytelling. Do you have thoughts about this?

A. Storytelling is an art form that cultures around the world have. I was very fortunate as a child to live next door to my grandfather, Ray, who is widely known as a storyteller and historian. I would sit and listen as he would talk to people visiting his small museum during the summer months. Not only did I get to hear great stories, I also learned a great deal about my culture and the things that are left out of schoolbooks. Mohawk Storytelling is very important to our culture. We do not have a written language. Therefore stories are handed down through the generations by word of mouth. Even our constitution is recited orally. The stories teach our people, especially children, valuable lessons and morals. They, in a fun way, tell us how we are to conduct ourselves as decent human beings and how we should respect all living creatures and entities. I have noticed that children of all backgrounds and cultures love to hear a good story.

Q. You come from a family of artists. Is your work very different from theirs?

A. I have always had an interest in art. It was always around me growing up. My grandfather made drums, my other grandfather made lacrosse sticks, my grandmother and my aunts made sweetgrass baskets, my uncle is a poet/graphic designer. My mother, Eva, carves wildlife figures out of wood and stone and has been exhibited in numerous places. Art in some form or another was everywhere. My father, John, taught me the most. He taught art for 32 years and has been published in over 60 publications. I would always look over his shoulder as he painted or sketched. When I would draw or paint, he would give me tips and advice. Naturally, my art is similar to his. However, in the past few years, I have been developing my own style but, you can still see his influence.

“Vestiges & Resurgence: The Art of the Native American”,

“Visual Expressions of the People of the Flint”,

“The Iroquois Experience: A Festival of the Arts”,

“The Art of The Fadden Family”,

Art has appeared in the following:

“Keepers of the Animals,”

“Keepers of The Night,”

“Sleep Rhymes Around the World,”

Charts and posters for the Six Nations Indian Museum series