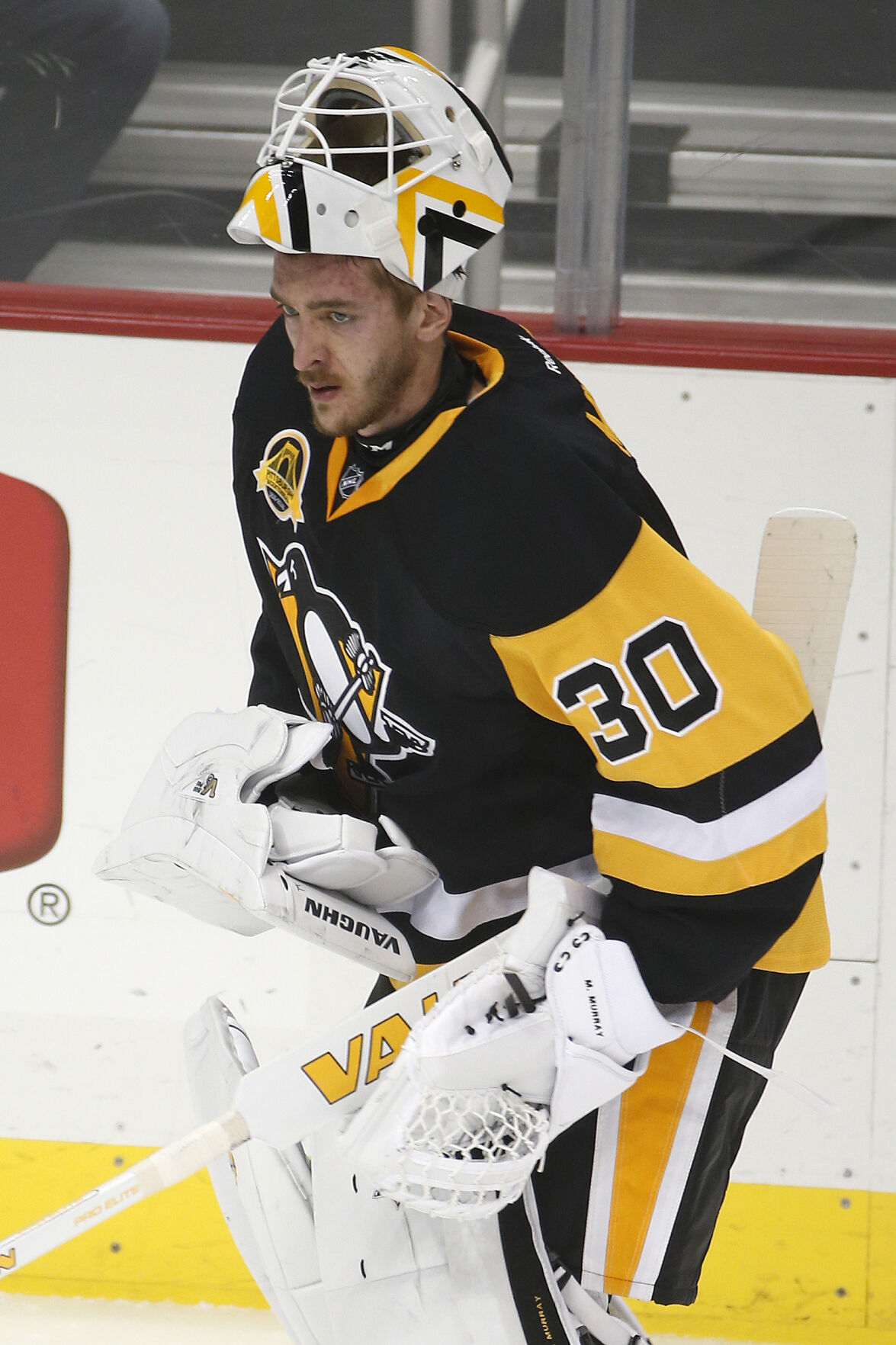 Goalie Matt Murray was traded Wednesday by the Pittsburgh Penguins to the Ottawa Senators.

Pittsburgh Penguins goaltender Matt Murray (30) stands on the ice during the second period of an NHL hockey game against the Washington Capitals, Sunday, Feb. 23, 2020, in Washington. The Penguins got the action started on the second day of the NHL draft by trading goaltender Matt Murray to the Ottawa Senators. Pittsburgh got a second-round pick, 52nd overall, and forward prospect Jonathan Gruden for Murray.

Goalie Matt Murray was traded Wednesday by the Pittsburgh Penguins to the Ottawa Senators.

Pittsburgh Penguins goaltender Matt Murray (30) stands on the ice during the second period of an NHL hockey game against the Washington Capitals, Sunday, Feb. 23, 2020, in Washington. The Penguins got the action started on the second day of the NHL draft by trading goaltender Matt Murray to the Ottawa Senators. Pittsburgh got a second-round pick, 52nd overall, and forward prospect Jonathan Gruden for Murray.

PITTSBURGH – Matt Murray’s time in Pittsburgh is over.

The Penguins sent the two-time Stanley Cup-winning goaltender to Ottawa on Wednesday in exchange for forward prospect Jonathan Gruden and a second-round pick in the 2020 draft. Murray became expendable when Pittsburgh rewarded All-Star Tristan Jarry with a three-year contract over the weekend.

“We would like to thank Matt for everything he’s done in his five seasons with the Penguins,” general manager Jim Rutherford said in a statement. “He was instrumental to our back-to-back Stanley Cup Championships, and we wish him the best.”

The 26-year-old’s exit ends a roller-coaster stay in Pittsburgh. The even-keeled Murray arrived in the NHL during the 2015-16 season and soon became head coach Mike Sullivan’s go-to netminder. Murray took over as the starter late in the season when veteran Marc-Andre Fleury sustained a concussion, and the rookie hardly looked intimidated by the stage during a postseason run that ended with the Penguins winning their fourth Stanley Cup.

Murray was just as strong the following spring, shaking off an injury minutes before Game 1 of the opening round and sparkling upon his return. He posted three shutouts during the postseason and held Nashville scoreless during both Game 5 and Game 6 of the Stanley Cup finals as the Penguins became the first team in a generation to win consecutive championships.

The Penguins rewarded Murray by giving him a three-year contract and allowing Fleury to leave for Las Vegas in the expansion draft. Murray, however, saw his numbers dip over the course of the contract and he struggled to stay healthy. He went 20-11-5 with a 2.87 goals against average and a career-worst .899 save percentage in 2019-20 while splitting duties with Jarry, who earned an unlikely All-Star berth following a stellar first half that helped Pittsburgh remain in contention amid a slew of injuries.

Still, Sullivan turned to the playoff-tested Murray when the qualifying round series against Montreal began in July. Murray played well at times over the first three games but found himself on the bench for Game 4 with the Penguins trailing. Jarry turned away 20 of 21 shots but couldn’t prevent a stunning upset by the 12th-seeded Canadiens that led to a series of changes in Pittsburgh.

Murray heads to a team that is also making a shift in net after opting not to offer 39-year-old Craig Anderson, the winningest goaltender in franchise history, a contract.

The 20-year-old Gruden, Ottawa’s fourth-round pick in the 2018 draft, collected 30 goals to go with 36 assists in 59 games for the London Knights of the Ontario Hockey League.

The second-round pick could be even more valuable for the Penguins, who previously did not have a pick in either of the first two rounds. They used the pick acquired from Ottawa to select Finnish goaltender Joel Blomqvist. In the third round, Pittsburgh selected another goaltender, Calle Clang of Sweden.

The Murray trade kicked off a trading frenzy at the draft. The Nashville Predators continued to shed salary by sending center Nick Bonino to the Minnesota Wild.

Murray and Bonino became the third and fourth members of Pittsburgh’s 2016 and 2017 back-to-back championship teams to be traded this offseason. The Penguins previously traded winger Patric Hornqvist to Florida, and Chicago traded defenseman Olli Maatta to Los Angeles.

Copyright 2020 The Associated Press. All rights reserved. This material may not be published, broadcast, rewritten or redistributed without permission.